We ask students from Devon's rehabilitation centre Gilead Foundations to tell us their stories. This time it's the turn of ANDREW JACOVELLI. 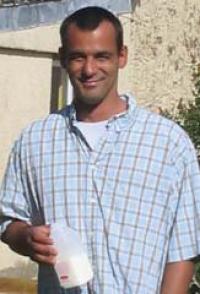 I grew up in North Wales, adopted as one of 10 children, and I was the youngest. It was strange growing up, there was lots of rebellion in the house, dad was always working and mum couldn't handle the responsibility. We were poor and although mum said we were okay, we knew we weren't. Because I am half Asian, I grew up with a lot of racial abuse and I began to look for friends who accepted me. That's why I started getting into drinking and glue sniffing when I was about 12 - I wanted to belong. My dad said the crowd I was with were not my real friends, but I thought they were. Things went downhill from there and at the age of 14 I went into children's homes. My behaviour got worse and I got involved in burglary and more drinking and ended up in detention centres three times before I was 16. That was followed by jail and heavier drugs until I was 23.

Then I met this biker in Torquay, who told me about Jesus. After that, on the street, I felt something strange and good for about two hours, which I believe was God as this guy was praying for me. He asked me if I wanted to go to a farm and I just said yes and he took me to Gilead. Ian Samuel and another man at Gilead prayed for me and I cried like a baby, it was the best release I've ever had. But I didn't understand what was going on and I left after two days.

Soon I was back in Exeter prison. I opened a Bible that was in my cell and started crying again. I knew it was God, but that's all. When I got out, I went back to Gilead but I left before I completed the course. After leaving the farm again, I stabbed a lad in the neck while I was on drugs and I was charged with murder. Ian Samuel came and visited me, and many people were praying for me. The charge was reduced to manslaughter and I got five years.

While I was inside, I forgot about God again but when I got out, I knew I needed help and returned to Gilead last April. The Holy Spirit is convicting me, pastors and elders are teaching me and my relationship with Jesus is growing every day. I'm serious this time and making sure I get lots of understanding to back up the experiences I have had of God's grace.

Jesus has walked by me in my life and touched me, but I didn't understand. All I knew was he made me cry. Now I'm open to being taught and that's the difference. I've been shown love and acceptance like I've never had before, and it's real. Even mucking out in a stinking barn I think to myself, "This is a great place to be."

Happy Xmas Andrew 2016
Although you aren't with us anymore, you would have had an ear to listen to with the recent re - investigation abuse in Wrexham homes. Yes you were telling the truth when m & m slapped you across the face in chevet hey. You sadly weren't believed at that time in the past.
Had you still been with us you would have been believed and of course you had a witness
Shame we all lost touch, it was also a shame that not once did any of our families visit us in Wrexham homes to see if we were alright, even if access was refused, had I been family I would have forced my way in.
Sometimes this is life eh! But I always think of you at special times and will always love you God bless

Hello Dawn,
Nice to hear others remember Andrew, I often wondered what other children's homes he went to and wondered about Bryn A, etc. as when he left a home in Wrexham I never saw him again but I know in those days he as other children didn't have a lot of support
Glad to hear you made it! & so sweet that you named your son after Andrew - I think if he looks down he will have a smile on his face.
S x sending you a hug (((dawn)))

Hello Fiona,
Hope you had a beautiful Xmas, I think we know eachother remember Father Fisher
I will always say good things about Andrew just wish I had known earlier as in 2001 - 2004 had I known I would have supported him and he could have stayed with me if he was struggling - sadly we all get split up sometimes in life.
Wanted to tell you a beautiful story about your younger darling
We walked miles one day to get kittens we saw advertised in the paper. Off we both went to a place called brumbo in Wrexham and we both must have walked miles.
There was quite a big litter when we got there and Andrew picked a long haired tabby that went to him straight away. I picked a black & white.
Well we had a lovely cup of tea with the owners and Andrew thought and thought the best name to call his cat and as the house was called ' Ferndale' Andrew came up with the name Fergie. I called mine Willow. Off we went with these two kittens and we smuggled them into the home, Andrews carefully in his coat. He made a little bed for Fergie in his drawer and these little kittens were spoilt.
We weren't really supposed to have them and I think I was 15 and Andrew maybe older or younger.

Luckily when staff found we had two kittens we were allowed to keep them and they became part of the children's home. Andrew spoilt his cat more than mine and it turned out to be such a beautiful looking cat.
Bless him

Hello Fiona,
I think we vaguely know each other if it is you are his sister and I feel you are. Remember Father Fisher? I remember you
I will always say good things about Andrew as I knew at times he sometimes lacked empathy and didn't think but children do this in crisis. What saddens me with Andrew is that when he went into the care system they failed him as other children. All adopted kids have different issues of attachment and it's normal emotions and thoughts and sadly there wasn't the support at that time and no secure knowledgeable stability
I can remember once girls passing through the grounds of one home calling him racist names and although I raised this and asked for the cut through not to be used by public nothing was done.
So as a child seeing two girls calling him names and Andrew just ignoring it and moving away I saw how it hurt him. One day I waited and I collared both of these girls myself and I'm afraid to say I gave both of them a very good thrashing, and after that they never used that cut through. Andrew was bullied by a couple of adults and with being moved to worse places I imagine the anger built up. Andrew always told the truth.
It's good that Andrew takes some responsibility but it wasn't all his fault, it just became a negative spiral.
The real Andrew was a gentle, loving intelligent gentleman and I think the photo of him carrying the milk in this photo sums him up well.

I wish I had known where he was but sadly everyone was split up and when I inquired I was told he had left 2001 or 2002 In hindsight I don't think children being in contact with others from care was encouraged if you know what I mean.
Where is he resting now bless him, it must have been so hard for you and your family I'm sending you ((((hugs))))
Sarah

Hi Fiona, are you formerly Jacovelli? We may be cousins

To Sarah
It was nice to read good things about Andrew
Do I know you?
Fiona

I wonder Fiona, and if it is you my warmest hugs and hope you are okay.
I cried when I read this, I though Andrew had left 2002 and cried then, I was very close to Andrew and spent much time with him in care, we got two cats together he was very close to me and I wish I had known about his where abouts earlier. Andrew got lost and all he needed at the time was love and understanding. I'm glad people understood him and he had some love with God as sometimes due to time and place God isn't always available but thanks to those who had time to bring some for him.
I will miss you Andrew you were a beautiful friend and I understood you, you are a star. God bless you Andrew and your cat Fergie lived many years with willow ( remember when we got them from Wrexham .
How I cry .....
Sarah

andy,i dunno if he remembers me but me and andy went to st josephs together he was always a good mate and made me laugh."JACKO"as we called him was a star and i was with him through school at infants,primary,and junior all at st joseph's,i never heard much about him only he'd been in with a bad lot and ended up in jail.sad as JACKO was i'd say in primary,junior school 1 of my best friends.i'm saddened to hear about him taking a life,and being jailed,i am over the moon that he has found happiness and purpose in his faith and people around him.but the story doesnt end their ,it continues.jacko my friend i wish you all the best and would love to hear from you if thats possible,as reading the item and knowing you i understand where you are now.wish i could join ya as i lost my faith and hope when i joined the army and left it too,my world and strengh is my children and wife.i guess i'm on a quest in life to understand something i have lost maybe 1 day jacko.
get bk jacko if u can and lets have coffee
all the best mark lee

Where is Andrew now?
Is he still continuing to find peace.