Andy Kyte: The indie pop singer moving between worship ministry and the mainstream 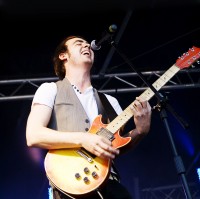 With close to 10 years of songwriting and performing under his belt indie pop singer, songwriter and worship leader Andy Kyte is finally beginning to get the recognition his big talent deserves. His song "Just You There" from his wonderfully named EP 'Bedroom To Throneroom' is currently on the Cross Rhythms playlist and he has just pitched a single, "Your Time Has Come", aimed at reaching the mainstream charts. Cross Rhythms quizzed the London-based songsmith about his musical and spiritual journey and began by asking Andy to fill in a bit of his biography.

"I was born in Wimbledon where I spent my whole childhood. I had the incredible privilege of having parents who were and are completely on fire for God and spent my childhood going to Queen's Road Church which my Dad, Malcolm, led. I took an interest in music when I was about 12 years old. I made a commitment to God when I was about five but it was when I was around 12 (around the same time I picked up music) that the most significant change came. I was on a youth weekend away. During one of the meetings a leader told me and my three friends to stand up. She had a picture of us splashing around in the shallow end of a swimming pool. She said we needed to get out of the pool and dive into the deep end. This picture completely summed up where I was with God at the time. As I said, I was a Christian, but I really wasn't fully living for God. So that night I prayed. I was completely filled with the Holy Spirit and resolved to give Jesus my everything. I've been running with him ever since."

With three Christian friends the 12 years old Kyte decided to start a band - even though most of them didn't play any instruments at the time! Andy remembered, "I took to playing the keyboard and after about a year and after hearing Muse I concluded that I wasn't very good! So, going for the more rocky sound I picked up the guitar and very naturally flew into it. I had lessons for a couple of years at the age of 16, where I started and finished grades four, five, six, seven and eight as well as doing a music A level. My friends and I called our band Metallic Soap We played together for about six years, practising every week. There was Seb Clements, our bassist and backing vocalist, David Woods on drums - who is now in a band called Romance who are signed to Fiction Records - and me on electric guitar and vocals."

In 2008 Metallic Soap released an EP 'Lost Generation'. The Cross Rhythms reviewer suggested it sounded like "a cross between the Arctic Monkeys and Queens Of The Stone Age." Andy remembers 'Lost Generation' with a certain fondness. "Recording the EP was a lot of fun. Over the years we'd just saved any money we made and I kept it in a shoebox under my bed. We ended up having enough money to go into a studio and record a four track EP. We'd recorded CDs and even tapes before at the church, pretty awful recordings but still captured the heart of what we were about. I'd written a few new songs ('See Your Face', 'Lost Generation' and 'Nomads Of The South') which we were excited to record. I remember people hearing the new songs beforehand and not liking them. They told us we'd be wasting our money recording these new songs that weren't as good. But there was something in me that was confident about these songs so I went with my gut and we recorded them. People really loved the tracks and admitted they were wrong. I still love listening to the tracks and even performed 'See Your Face' acoustically at a gig last night!"

Having grown up and having friends and family in Queens Road Church Andy understandably felt he'd be there for life. But God had other ideas, as Andy recounted. "I liked the idea of church planting but thought I was fine where I was. That was until I heard about a church plant in Camden. A guy named Stef Liston, who does a lot preaching at the NewFrontiers youth camp Newday, was going to move there and start a church. As soon as I heard about it something in me was drawn to it. I prayed a lot about it and ended up meeting Stef who pretty much invited me before I'd said anything! I moved there when I was 18 so it was a real adventure. 13 of us moved up to Camden in faith and God has grown the fellowship, Revelation Church, to 170 across two services. That has been a huge privilege to see."

With his move to Camden, Metallic Soap came to an end. Said Andy, "We played our last gig at Greenbelt and called it a day. I became a solo artist from then on and started doing lots of acoustic gigs. It was a lot of fun, we played at all sorts of venues like Hard Rock Cafe (twice) and Camden Barfly. But some of the best gigs were organic. We were on a train coming back into London from a gig in Chelmsford when everyone in the carriage started telling us to play, so we did! Even the ticket lady ended up dancing down the aisle with a passenger! It has been a great way to meet all sorts of people and share the Gospel. The lyrics to my solo artist songs haven't really been Christian but just honest lyrics that people can relate to which has brought huge bridges and attracted people to us rather than them being repelled by any Bible bashing songs. We've played at house parties where people have been snorting cocaine in the other room. It's exactly where Jesus would be now and who he'd be spending time with. I've also done some awesome gigs with the backing band I've been playing with, less organic but lots of fun."

Andy goes to sources outside the usual "Christian music" ones for his inspiration. He admitted, "As a musician I have always had to look to secular music to find the most creative and skillful music and lyrics which has always bothered me. I love composers like J S Bach. He was a Christian man whose musical works, Christian and secular, 800 years later are still regarded as the best music of the Baroque period, a 150 year time period of which he was only alive for 65 of them. No one could touch him. The world still looks on at his music and says there was no one as good as him, praise Jesus for that. Now I think there's been potentially an unhelpful emphasis on 'the worship leader'. People have been elevated because of an anointing which has excused them from becoming good musicians. So over the last 30 years or so Christian music has become this middle of the road, bland rubbish which is so bad that I don't even want to listen to them let alone show them to my friends who don't yet know Jesus. I spend my quiet times with secular artists like Helios and Sigur Ros in the background because it's beautiful music. And it's not just the music. There is a huge lack of songs about Jesus! And just because a song is about God, that doesn't automatically make it a good song. I'm sick of hearing new worship songs and finishing off the lines because the rhymes are so obvious. We worship the Creator for goodness sake, let's get some creativity going!

"I think that there are a couple of good songs out there at the moment, more lyrically than musically. 'You're Beautiful' by Phil Wickham, and 'Oh How He Loves Us'. They've really challenged me lyrically to paint Scripture and doctrine into songs so strongly that people will feel utterly compelled to worship the King of Kings. I just feel that God is worthy of the best music, words and overall praise. Like Bach, people should be coming to us to hear the freshest, creative music, not the other way round."

Andy's radical perspective on the lack of quality modern worship songs led him into writing his own worship songs. "Over the last couple of years I've been writing praise songs which have really blessed the church. God opened up a door last summer at Newday where I had the privilege of serving and leading praise everyday in the 12s-14s. Before I went someone suggested that I record an EP of the praise songs I'd written and release them at Newday. He put me in contact with a friend who does sound engineering and we went from there!"

One of the outstanding tracks on 'Bedroom To Throneroom' was "Just You There". Andy spoke about his turntable hit. "I was playing guitar in my room about 20 minutes before leaving to lead at church when I stumbled across some beautiful chords. A melody followed quickly and lyrics came bursting into my head. I left for church with most of the song done so I just played it that night at church. Stef told me afterwards that it was great but I needed to finish it properly. So I spent a lot of time on the lyrics, added a refrain, etc. I like the idea of it being like a modern hymn - a verse on creation, the cross, etc. But I wanted to draw on a couple of other themes. I ended up writing a verse on the ascension, where Jesus leaves his disciples and goes back to the right hand of the Father, and also a verse on the return of Christ. This is a day that we all look to but don't sing much about. I was determined to fill this song with inspiring lines like 'Hovering, lighting up the skies, just you there' but also draw the theme that at every point of history God has been completely separate, holy and on a completely different level to anything created. We'd actually already started recording the EP but had to get 'Just You There' on it so recorded that too!"