Billy and Sarah Gaines: The husband and wife team with a new gospel album

With their own record company and a brand new album, husband and wife team BILLY AND SARAH GAINES are on the up. They spoke to Andy Charalambous. 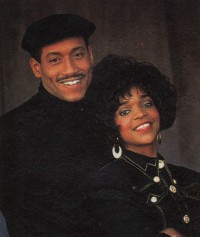 Billy and Sarah Gaines have been around a long time. So long in fact, that between them they have pushed out a creditable seven albums, three children and countless concerts that certainly go a long way towards establishing them as being one of the 'greats' of latter day gospel music. Now, after spending the bulk of their recording career with Benson Records the duo have finally cut their ties to go it alone in a new project allied with Warner Alliance launching their own label, Sound House Records. The first Sound House release due to be launched next month is Billy and Sarah's 'Come On Back' album.

In many ways the 'Come On Back' new album is seen by the couple as representing a challenging new chapter in a story that first began way back in 1974 (when they first teamed up as a singing duo prior to their marriage in 1977). When I caught up with the pair of them, it was in a small room tucked away somewhere in London's City Temple amidst a noisy sound check heralded by up and coming rapsters PLO. For their part, both Billy and Sarah had just completed their hour long sound check for a concert in which they themselves were the star attraction.

Right from the very first question - it was Billy who was keen to do all the talking whilst Sarah, looking a little tired and distant, decided that she wasn't going to say hardly anything which was something of a shame. She later confessed to having been homesick and missing her children who were back home in Franklin, Tennessee. However, despite Sarah's emotions, they were both here to promote their new album, an album that they consider as being a true expression of their musical aspirations after their split from Benson.

For any marriage to survive there has to be plenty of ground rules. Being under the spotlight in the same capacity as Billy and Sarah probably demands plenty more where the importance of recognising the values of family life and the role it plays for their ministry are regarded as just as important as the music they have long been renowned for. "I happen to believe that according to scripture a successful family life is a prerequisite for ministry," explains Billy. "As I look at all the requirements for deacons, the bishops and all these things, it tells me that they have to have a good home to hold that office. So in light of that fact, I consider the music ministry to be important enough to have those qualifications.

"At times it's inevitable that the pressures of life are always going to be in competition with ministry, even the Apostle Paul said, 'I'm single and I counsel you to stay single because when you get married you will not be able to dedicate yourself as I did, because you're going to serve your wife or your husband and give them most of your attention.' So to be married is going to take away some of the time you are going to be ministering. But to be single and celibate has to be a calling. Our calling is to be married and we realise that since God has called us to be married, in the context of being married he is able to maximise our effectiveness inside of that calling and our ministry."

As one would imagine when looking at Billy's stature alongside the petite Sarah, he is in fact very forthright and astute when it comes to speaking about the issues relating to their work as a duo. He is after all the 'head' of the family which also makes him the head of the group. He is also very polite and professional in his manner and is in no way pretentious or hyped up considering the amount of success the couple have enjoyed over the years. However, in stark contrast to her assertive husband, Sarah is obviously a woman of few words except of course when she is singing.

Judging by the familiar faces that I spotted during the sound check, it was clear that Billy and Sarah would be using British musicians to support their act where I was naturally keen to get an insight into their perceptions of the British gospel scene as a whole. "The one thing that sets singers and musicians apart is the material. It really comes down to the song," states Billy.

"You could be the best singer in the world if you come up with songs that can hit people right within their heart, where everybody loves them. Songs that can turn into hits; that's really what makes a musician worthy of their talent - I'm convinced of that.

"Quincy Jones once made a statement where he said, 'You can take a song and make 20 different singers a star with that same song.' Singers may think that they are so good - but the fact of the matter is that the song itself has made them sound good. So it all begins with a song whether it'll be someone from Britain or America."

To some extent I have to agree with what the man is saying. If there is one major fault with British gospel music today it's that there are not enough people writing their own material as just about everything that gets sung at any number of concerts these days is just another series of worn out cover versions. On the other hand, I also believe the way that a song is delivered is just as important no matter who is singing it.

In past times I have to admit that whenever I have heard or read anything about Billy and Sarah Gaines, I have always had this perception that their music would be aimed directly at the married fraternity that also included myself. After listening to 'Come On Back', my conclusions were fairly mixed to say the least. Indeed here is a project that seeks to cover various aspects of daily life and the emotions, turmoil and joys that go with it.

The album has been produced and arranged by CCM maestro Michael Omartian and is a fine piece of work in every sense of the word. In typical US fashion, it contains plenty of nice touches were the mood shifts from praise to romance interspersed with a few pop tunes - all of which have been pleasantly delivered with the minimum of fuss and bravado normally associated with latter day Stateside tunes.

"Our music is aimed at everybody, it just has to be," Billy declares. "I have always had a philosophy that we don't ever want to be specialist. By all means, we want to be diverse as broadly as possible so that we can affect many people's lives. In our early days of recording, our music changed because those powers to be felt we should do something different where our style was tucked away under a rug somewhere whilst we pursued what somebody else convinced us would work. Since that time, we have just simply gone back to what we love and what we do as opposed to somebody else's idea of what we should be doing."

The freedom to express themselves the way both Billy and Sarah want to be heard was the fundamental reason why they quit Benson to form Sound House Records. On the back cover of their promotional album sleeve there is a little anecdote that reads: "Sound House is a safe place where artists and label will partner together seeking to serve the lord with their music, finances, and lives. At its best, Sound House is a full expression of God using creative people to serve His purpose."

I have a sneaky hunch that this project was initially called 'Safe House' judging by the graphics on the sleeve, and that it was probably changed because it didn't sound quite true to the ear. Of course I could be wrong, but more importantly however, the whole message represents a severe and definite swipe to those recording companies who are seeking to stifle the artistic freedom in favour of bland conformity as Billy remarks, "We cut ties with Benson because they were mistreating us, that's just plain and simple fact. Everything we're doing now we could have done with Benson, it's just that they wouldn't give us a chance to do that so we left there and we found someone who could.

"When we make a perfect connection with God's perfect will there's just no better place in the world to be. The Bible tells me, 'Boast not yourself of tomorrow for you know not what today may bring.' So in light of that fact I don't try to surmise what's going to happen in the future, but what I do know is that we're both very happy for what we are doing and just as excited for ministering it. It's been a long while since we felt that way."

It just goes to show that selling records isn't everything to a couple who want to be understood for what they really are and what they are capable of. Furthermore, when you consider both the achievements and popularity that Billy and Sarah Gaines have accumulated over the past 20 or so years, you would have thought that a company such as Benson would have listened and took heed as to what one of their major signings were saying about future directions and artistic freedom.

Instead, Warner Alliance have now picked up the tab. There's no doubt too that the company will also pick up the dividends in years to come. And what's more, Billy and Sarah Gaines intend to stay together. As tempting as it may be, there are no plans for any solo projects even though as individuals they could easily carry it off. On the contrary, Billy himself proudly gave a hint of the things to come by announcing that the Gaines family as a whole will be hitting the gospel together sometime in the future. Is that personnel fixed? Well, there are no plans to add to the two girls and a boy already carrying the Gaines surname and who are looking forward to taking over from Mom and Dad in the next chapter of the Gaines family saga.