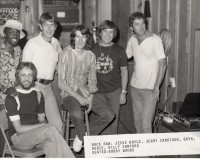 'Grand Arrival' was his first album on A&M, released in 1978 and featured a prestigious band. He remembers, "They decided to fly me out to Nashville. I actually started doing 'Grand Arrival' with Glyn Johns in England but for some reason they thought I'd be better off in America, so they took me to Nashville and we ended up at J J Cale's studio - Crazy Mama's - with Audie Ashworth who was J J Cale's producer. So Audie was my producer and we used all their musicians and J J Cale came in and hung around and lent me his guitar for a while, which was cool! They have a different way of recording over there. It was very relaxed. They always have weekends off where you have to go on some canoe down Buffalo River or something, you know what I mean? It HAS to be something physical. Or go fishing outside Panama City. So always some outdoor activity and I'm not really an outdoor kind of guy, but you do it!"

The opening cut from the album, "Come See What Love", was released as a single and although it was played on Radio 1, it didn't chart. Was he disappointed that he'd released three albums and failed to find a hit single? "I toured a lot. A&M stuck me out on tour supporting Gallagher And Lyle and I think they did as best they could. Who knows why there wasn't a hit? It's a mystery all these things! It was frustrating. The whole thing of: 'It's a faith issue, man. You've got to have faith! If you believe then you will have a hit record!' and all this." He laughs. "So we went through this whole thing of believing, buying all the right clothes, you know what I mean? In anticipation of this wonderful event. And it never happened! I suddenly thought, well is it really all about that?"

He continues, "From the off, from 'Grappenhall Rag' because that was my first single, I thought I was going to be famous. Then, because I knew God and I was going to tell the whole world about God I was going to have a number one record and be famous and tell the whole world about the Lord. It sounded logical to me that that's how God would work. Now I think success isn't to do with anything in particular, it just happens, doesn't it? I don't think it's a sign of blessing if you're successful, especially in music, because there's lots of great, great music around that people never even hear, you know. So if you put a spiritual thing on that as well - well you're not successful because God isn't blessing what you do - then it's just absurd! So I'm completely at peace with making music. And if who gets to hear it is just one person; great. And they enjoy it; that's fine."

I remind Bryn about another appearance of his on The Old Grey Whistle Test with a band. Bryn performed "Come See What Love" and "Beans On Toast". At the time I didn't know that he was a Christian, I always watched the show to discover new music. However it was another television show that really made me sit up and notice. I had become a Christian in 1978 and there was a teatime television show called Pop Gospel fronted by Garth Hewitt and Berni Flint. I remembered Bryn performing "Standing On the Rock" from the 'Keep The Ball Rolling' album, his second for A&M. 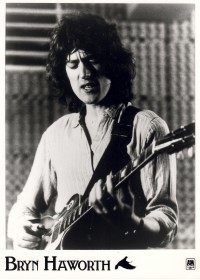 Bryn remembers that the Pop Gospel programme was a little harrowing for him. "It was done up in Manchester. One of the producers they'd got in was Micky Dolenz, who was The Monkees' drummer. Micky was trying to make us act like The Monkees! Garth was the host basically and he wanted me to leap onto the stage from nowhere... like The Monkees used to do - 'HERE I AM! IT'S SHOWTIME!' kind of thing. And I just could not get this thing right; I kept falling over! Micky got so frustrated with me and I think he gave up in the end. I had to remember a bunch of lines! I'm like, 'I'm a musician! What's going on?! I'm just here to play a song!'"

The second A&M album, 'Keep The Ball Rolling', seemed to be a little bit more polished and more poppy than Bryn's previous releases. Was this an A&R direction, again searching for that elusive hit or was this what he wanted to do? "No," remembers Bryn, "they wanted me to go in this direction and to be more poppy. They got me with Jon Astley, who produced that album. I enjoyed the songs and it's interesting that it's nearly 30 years ago now but a lot of the songs are about social problems and they're actually still the same today but worse - like unemployment and youth culture and greed and selfishness and all these issues that were on some of these songs. It's interesting how nothing changes! Human nature stays the same."

At that time, Bryn also continued to do sessions and was touring with Cliff Richard's band. He explains, "I joined Cliff's band for a brief period and went on tour to Australia and did the London Palladium with him. For 'Keep The Ball Rolling', Cliff came in and did a couple of songs and I suddenly thought, what do you pay Cliff Richard for doing a session? What do you give him?! I thought, well I know what, I'll give him an Amplified Bible; he probably hasn't got one of them! And I gave it to him and he said, 'Oh, this is good!' I said, 'Yeah, it's louder!' And he really liked that!"

'Keep The Ball Rolling' was very much of its time and sounded thoroughly contemporary. Some of it reminded me of Gerry Rafferty who had a hit with "Baker Street" in the same era. Was it just a question of not getting enough promotion? "I would have liked more but it just didn't happen, that was just the way it was really. You just put 'em out and you do your best."

Cliff's album of 1979 'Rock'n'Roll Juvenile' was the rockiest thing he'd recorded since the '50s and Haworth played slide on the title cut. He also sessioned for Gerry Rafferty and remembers, "It was really a joy to work with Gerry obviously because of the quality of the songs, and Hugh Murphy was the producer at that time and he was great as well. But Gerry was just really good at coming up with ideas, like the 'Baker Street' sax riff." Haworth hums the tune, "That was his idea. He comes up and you just play what he thinks, you know? And you play it to the best you can. But again, as a musician, it was just such a satisfying session to do. I enjoyed it."

August 1979, Haworth headlined the Monday night of Greenbelt, in the year that event took a huge leap in popularity. Cliff Richard had headlined the night before and the crowds had more than doubled from the year before. I had never seen Haworth play live before but I can remember walking from my tent to the main arena on a sunny afternoon and hearing Bryn and band sound checking and the familiar sounds of "Grand Arrival" drifting across the park to me. I still remember the feeling of joy it provoked. There was sunshine, the song sounded great, I was looking forward to seeing him play and all was well in the world.

Greenbelt '79 was a pivotal event for Bryn. It was his first Christian festival and over the next three decades Bryn was to become more and more involved with the Christian scene, signing with a fledgling Christian record company Chapel Lane in 1981, becoming a worship leader and in the years that followed recording a stream of albums for Word, Vineyard and Kingsway and his own Bella Records. On the Rimmerama programme Tony Cummings and I had originally intended to get Bryn to reminisce about those years and recordings as well. But two and a half hours of Rimmerama had flown by and we'd only done justice to Bryn's "secular" years. His vast experience and dazzling musicianship coupled to his gentle, winsome spirit have made Bryn one of the most loved figures in the whole panoply of British musicians - both Christian and non-Christian. Having recently battled through serious health issues Bryn is still performing and recording. When one sees artists like Mavis Staples, Neil Diamond and Glen Campbell recording new albums and entering into a new dawn of widespread critical acclaim one can but hope that such a future is possible for this most gifted of musicians. It's quite possible. And if old bandmate Gordon Haskell can become a huge one hit wonder at this end of his career after languishing in obscurity for years, one can but hope that Bryn could do the same. Mind you, I get the feeling that after 40 years of playing, it's still the sheer joy of making music that's important to Bryn rather than the glittering baubles of celebrity status.

If all Bryn EVER did was play guitar on " Hold On ", he MORE than earned his ticket to heaven, in my humble opinion! : ) His solo sounds like " yeah, yeah, I know both my amp and my guitar are on fire, but I'm gonna finish this lead! " That whole track he's playing like a clenched fist, just pounding out some in your face, Class A rock n roll. One of my guitar heroes!

Bryn is a class act. I don't think hes ever released a bad album . Nice that some of the older stuff is now released to cd , even if you do have to pay mega bucks for Japanese rereleases. Bryn as a man also commands respect. I would have liked to have heard about the Solid Rock/Starsong years. I bet there,s some great unheard stories with Barratt, Mark Williamson and Larry Norman

Bryn was raised in 'Darwen' not 'Darwin' (this is in Australia) He attended the Darwen Technical College.

Bryn has made some wonderful music over the years. I heard him on Radio 1's In Concert; I was also at GB79 and still have a photo of him soundchecking. Sunny Side is a brilliant album, probably his best, but he has produced his best Christian stuff lately, like the brilliant 7-minute Wash Me Clean from Keep the Faith. I'd love him to release a complete blues album, as that is his strength IMHO.

I remember listening to Bryn's "Give All You've Got To Give" on Radio 1. It was around the time Pink Floyd released "Wish You Were Here" and Bryn's song stood up magnificently next to "Shine On You Crazy Diamond" with the Les Paul playing those sweet licks. Great song Bryn!