SEAN PUFFY COMBS and JACKMASTER FUNK wouldn't be any hip hop buff's obvious nomination for gospel rap. But the fact is... Kwaku reports. 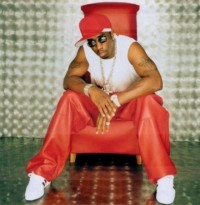 You've sometimes got to check your prejudices when forming opinions of music artists, because often the projected image isn't necessarily the same or compatible with their real personality. Take for instance Sean Puffy Combs, top R&B and rap producer of artists like the late gangsta rapper Notorious B.I.G. (aka Biggie Small). Isn't he the video director and producer of music that celebrated the 'living large' designer label materialism, and American urban sex and violence vignettes? Or Farley, Jackmaster Funk, house music pioneer and a doyen of the top league of house DJs, constantly working within some of the most hedonistic environments. However, the fact is that they both have God centred in their lives.

Having recently come off the top spot of the American Hot 100 charts after a six week reign with his debut solo single "Can't Nobody Hold me Down", which incidentally was dethroned by his production of Biggie's "Hypnotize", the busy writer/producer/artist and label boss of Bad Boy is currently working on a gospel album called 'Thank You'!

"It's our biggest project we've ever worked on," says Puffy. "Because we've been able to make a lot of things cool, we've been able to have a lot of success and it's all definitely due to God blessing us. I just wanted to create a musical gift - and also at the same time it may make a lot of things cool. I feel kids should understand that it's important to have God in their life, even though they listen to rap music."

And Puffy has an answer for those who can't reconcile the Bad Boy leader with Godly work. "Which is why we're doing this project," says Puffy, gathering his thoughts. "The hit records, the success, it just doesn't mean nothing without your best friend. That's my best friend, and that's my partner. We was doing this together, and I try to take it day by day to figure out how to keep on going. That's why my album's called 'No Way Out' - it's something I started and I can't give up, you know what I'm saying?... I just don't have the answers to all the questions of why -I just pray and I try to tell God to help me make sense of it one day, and try to help everybody else to understand that one day, hopefully somehow, something positive will come about the situation of him passing and 2Pac's death."

You'll no doubt have heard 'I'll Be Missing You', a Biggie tribute record by Puffy, Faith Evans and 112, which incorporated Police's "Every Breath You Take" song. It didn't take any deaths, or sudden bolt of lightening for Farley Jackmaster Funk to become a born again Christian early last year. "But the Lord was leading me to Him a long time ago," says Farley, whose 1986 hit "Love Can't Turn Around" was the first house single to enter the British top 10. "You just don't wake up and you're born again. It's a process that God's always there and you just have to accept it... whilst you're still in the flesh, you still make humanly mistakes. But you really try to live as best as you can."

Naturally his new outlook affects the records he plays. "I don't play records with swear words in them. And a lot of times I try to play the most positive records," says Farley, who's got a very sincere "God bless you" message on his answering machine. "Sometimes I may end up playing a few more instrumental records because of what the vocal record is saying, because I tend not to promote things that are not good natured."

Whilst he has no plans for a new single, he says, "Whatever the single may be, it will be praising God. Because, like I said, to be born again, I want to have a message in the music instead of the message that's been around for ever - about love making, I wanna do you, I wanna do that, no diggity -I wanna have something that's really praising the Lord, praising our Father who's in Heaven that's really blessed me to do what I do, and just giving praise due to him."

The opinions expressed in this article are not necessarily those held by Cross Rhythms. Any expressed views were accurate at the time of publishing but may or may not reflect the views of the individuals concerned at a later date.
About Kwaku
Kwaku is a freelance journalist who writes about the music industry and covers various forms of music, from African, jazz, hip-hop to reggae and what's in between.