1:Lite: A vision for youth 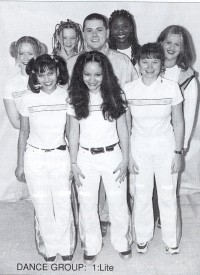 1:Lite is a band born out of a schools ministry in South-East London called Vision For Youth (VFY). Chris Adkins (mother of two young children) and Steve Hayes are the schools workers, song writers, and singers/rappers while five or six dancers join the group for gigs and school concerts. The band has been around for about two and a half years now, though Chris has been taking the Gospel into schools for roughly four years. The band's chosen style of music for communicating the Gospel to the kids is hard-edged dance, claiming influences from mainstream artists such as Lauren Hill, Madonna, Beastie Boys and Fat Boy Slim. It will therefore probably come as no surprise that the World Wide Message Tribe had something to do with the setting up of the ministry.

"It was about five years ago", recalls Chris, "when a friend and I were playing at Cross Rhythms in one of the small tents, and we really had a vision for taking good music to the kids, because kids wouldn't come into the church events that we were putting on. At that time, WWMT weren't famous, and we happened to bump into them, Mark, Andy and Zarc, and they invited us up to see their schools work. We spent a couple of weeks doing training with them and decided we wanted to do a similar thing down south, as there's a real need for it in London."

However, God didn't seem to let them work exactly the same way as The Tribe and Manchester's Message To Schools, as Chris explains. "We had been praying for a really strong team and we've been frustrated that we haven't had the big set up of the Tribe. We've been praying for doors to open in that area, but God never seemed to open that up. What we've found is that because we've not had full time workers, we've depended on local youth workers, which in a way has now become our biggest strength. When we have a schools week, we'll phone up the local churches in the area, get them together and pray with them, and get them doing the classroom work with us so that when we leave, they're there carrying on the work. So what we first thought was a weakness, God made our biggest strength, as they can carry on the follow up work better than we ever could, as they're linked with the local churches.

"Biggin Hill Christian Fellowship, which is part of New Frontiers and is where we worship, supports us with prayer, and we try to work closely with other local churches. It's difficult, but we've seen a good outcome: it's been, a long slog, but it's been rewarding, as we've seen a lot of good fruit when we've continued clubs. We've seen quite a lot of kids saved through our 'Jumping In The House Of God' clubs. We usually get a very positive response to the music and to the Christian message. When kids get saved, it's usually long lasting because we have good follow up.

Like the World Wide Message Tribe, 1:Lite finish off their schools weeks with a big Friday evening concert. They are also starting to get on the Summer festival and Christian events circuit, which is good news for readers! Chris reckons that playing last year's Cross Rhythms festival mainstage is the highlight so far!

More good news for readers is the imminent availability of their debut album 'Rainmaker'. It contains 10 songs covering a variety of subjects relevant to young people, and a mixture of different styles within the wide genre of modern dance music. Tony Silcock (The Psalmist') from Psalmistry produced most of the album at Redland Studios in Bristol.

"It's quite amazing how we got in contact with Tony", exclaims Chris. "It was through a friend of a friend who saw an article in a secular music magazine about someone making Christian dance music. We phoned him up, he played us some of his music and we liked the hard edge to it, as more of the older boys we reach are into that stuff. A guy called Toby Chapman, who's worked with Babylon Zoo and Spandau Ballet, produced the other tracks. He's not saved, but is really experienced and knows my brother-in-law. He was a bit wary at first, but he's got to like us and did a good job for us!"

Songs with titles like "Getting Deeper", "Light In My Darkness" and "Shelter" suggest a certain spiritual content to the lyrics, but songs such as "I Need Love", "Never Love Another" and "Release The Pressure", Chris jokes, "..might think we're desperate people, badly in need of some love!"

Chris's favourite is "Rainmaker", the title track: "It was born out of an idea that when we go into schools we want the kids to know that me and them are the same, searching to get to a point of faith. Often we write in response to what we've seen and heard in schools. Also we have a couple of happy, sing-along tunes that they can get in their minds, which are very positive. 'Pressure' and 'Light In The Darkness' are really about finding peace of mind, asking questions as well as coming up with answers!"

So what are the band's aims for the coming year? "We'd like to play more festivals and get the CD signed, with financial backing if that's God's will. Our vision is to get into more schools, and keep looking out for more bands to work under the VFY umbrella. Also, we're wondering if we can give our backing tracks, songs and lesson plans to other teams who want to take this format into their own schools, so the Gospel can be got out there in a wider way.

"If anyone is thinking about doing a similar work, it's not a daunting task if you break it down. If you have a musical ability, can sing or have a passion for kids, get out there and find ways to talk to the kids, get to know them and run lunchtime clubs. Show them Jesus through the power of his love and the testimony of others!"