1 Girl Nation: Living out their faith while they're young

The new all female pop dance CCM group 1 Girl Nation have been instantly catching youthful attention and radio play with their debut self-titled album. So far the critics have been fairly enthusiastic about the group's debut with indievisionmusic's Jonathan Andre even suggesting that the group are one of his "favourite new artists of the year." Such accolades are surprising in view of the fact that a sizeable number of pro music journalists and enthusiastic bloggers go out of their way to lambast specially assembled purveyors of fluffy girl pop. In truth, 1 Girl Nation may have a bit of that about them but there is also some impressive club music and emotional balladry on the girls' Reunion Records debut, not to mention a collaboration with CCM hitmakers Royal Tailor. The group consist of Lauryn Taylor Bach, Kayli Robinson, Carmen Justice, Lindsey Ciresi and Kelsey Sowards and came together in one of those gruelling audition processes not dissimilar to American Idol or X Factor.

Lauryn spoke to Christian Music Zine about the auditioning process. "Each of us had been pursuing separate musical careers when we heard about this unique opportunity to audition for a Christian, all-female pop group. We decided to try out and see where the open door would lead. We submitted videos of ourselves singing and were among 15 girls invited to a weeklong audition in Nashville. By the end of the week our dreams came true as the five of us were chosen to become 1 Girl Nation! God was certainly working in the details of each of our lives leading us up to that point. As for me, I had just been a part of the industry audition for The Voice. I was backstage with hair and makeup done when the team filled up. I never even got to sing! I was upset at the time but that closed door led me straight to 1 Girl Nation, which is what God was preparing me for all along! We were all living in different parts of the country, so when we made the group, we immediately packed up and moved into a house together in Nashville. We jumped in full force and have spent the past year working on songwriting, choreography and making the record. It's been so rewarding to create music that we're passionate about."

For Kelsey Sowards 1 Girl Nation has been responsible for changing her whole outlook on life. She admitted, "I was in a tough place when I heard about this group. I was trying to get my life back together emotionally and spiritually. I was just very broken. My local Christian radio station, WBGL, called and encouraged me to audition. After submitting the application, I got the call saying I was one of 15 girls chosen to come to Nashville. They told us to pack for five days. I packed for two days because I thought for sure I'd be going home. I made the group. I didn't have anything to wear, so I ended up wearing a bunch of clothes from the other girls. God knows what he's doing and he doesn't make mistakes. I do, but he doesn't. It was ordained that I be here. There's a purpose and I feel God gave me a second chance. It's been a really great blessing."

It's a sad truth that many "manufactured" groups only have one or two members with real singing talent and the others are there for their good looks and/or dancing ability. In 1 Girl Nation's case this is definitely not true and each member of the group sings lead at least once on the album. Enthused singer and occasional rapper Lauryn, "Certain lyrics or vocal parts just matched a certain girl perfectly. We're so thankful for our producers who worked with us through that discovery process." 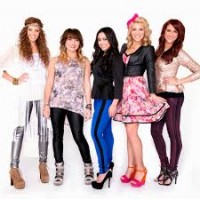 The first single from the group's album is "While We're Young". Said Kayli Robinson, "There are a lot of songs on the radio today that say, 'Let's live while we're young, just do whatever and take it day by day. You only live once'. It's fun, but it's only fun for a short amount of time. We wanted to put our spin on that idea and say, 'While we're young, we want to live out our faith! We want to bring the message to young girls that you only live once, so let's live for Christ!"

So I did not know about the Kelsey thing wow

For more on 1GN visit the 1GN artist profile