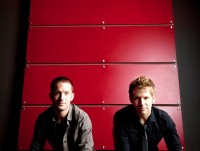 A recent addition to the Cross Rhythms playlist is "Apologize" - a tender piano-led ballad that talks about the importance of swallowing our pride and forgiving one another - from 33Miles' excellent second album 'One Life'. Since 2007 the Franklin, Tennessee-based band have released four albums that combine pop, rock and country influences with radio-friendly hooks and a strong spiritual message. The group are often compared to artists like Coldplay, Train and OneRepublic but 33Miles say that "it's the Christ-focussed, heaven-minded life that fuels everything we do."

33Miles formed in 2006 when talented session vocalist Jason Barton, feeling unfulfilled though recording and touring with various groups, began praying about starting his own band. It was around this time that Jason was introduced to guitarist Chris Lockwood, who was about to begin a scholarship at Boston's Berklee College Of Music. The pair quickly formed a strong songwriting partnership and within two months had recorded a demo. The line-up was completed with the addition of keyboardist Collin Stoddard and within a year 33Miles had signed with INO Records. "It happened much faster than I ever expected it to," remembered Chris.

Speaking to www.all4god.co.uk Lockwood explained where the band's name came from. "33Miles is the 33 years that Jesus lived, and the miles represent the journey and the legacy of his life. We translate years into miles to show how he walked out every mile of his life in total obedience to the Father, and in turn challenge ourselves and the body of believers to do as he has done."

33Miles' self-titled debut, produced by Nathan Nockels (Passion, Point Of Grace), was released in 2007 to enthusiastic reviews and the group were nominated for a Dove Award as New Artist Of The Year. Cross Rhythms commented, "These lads deliver a sound that is hugely radio friendly and the unambiguous lyrics make a welcome change to all those arty bands chasing the mainstream." The group's next album 'One Life' was described as "a little bit country, a little bit pop and roll," and was produced by Nockels, Brown Bannister (Third Day, MercyMe) and Sam Mizell (Matthew West). In 2009 the band released the Christmas album 'Believe' through Family Christian Stores and in 2010 the project, featuring renditions of carols like "O Holy Night" and "Joy To The World" alongside original material, was made available for fans to download. 33Miles' latest album 'Today', produced by Nockels and Ian Eskelin (Stellar Kart, Starfield), was released late in 2010 and sticks to the same winning formula as previous releases despite the departure of Stoddard earlier that year. 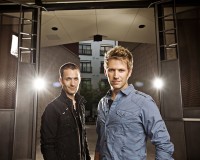 Lockwood explained where the band find the inspiration for their songwriting, "Our inspiration, as always, is the Lord Jesus Christ. We just want to write songs that continue to feed the Church and inspire people to live life to the fullest in Christ. There are so many songs that we get excited about seeing God use in the life of the Church, but we are only inspired by the glorious message of Jesus Christ".

He continued, "We can't ignore that we live in the 'world', and that we have responsibilities to fulfill while we are here. However, I honestly believe that everything we do, dream, think, say, how we respond, what we desire. . . everything should be eternally driven and rooted in the knowledge of Jesus Christ. It's not easy because it requires us exercising faith, however we can never be too close or too devoted to Jesus Christ. If our devotion to Christ means us being condemned and beaten at the end of everyday then take every condemnation and beating with a smile. I've begun to look at my life over the last couple of years from a more eternal perspective. Live every day with an eternal perspective because everything about this world will come to an end one day, but those who trusted and followed Jesus Christ will live forever. It is our duty and call to glory in the living God through Christ Jesus. If our roots our buried into this world we will sadly be disappointed."

What advice would Chris give to those who may be struggling in their faith? "Know your Bible. Carry it with you everywhere you go. That's my encouragement. Faith is not easy to explain to the mind that exists of common sense, but that will not matter if we know our Bible, and more importantly, live out the word of God. People are inspired by something that is 'real'. Show real faith, stick with Christ no matter what you go through. Love when you are hated. Honor the Lord above all things, no matter the cost. Faith and life that is grounded and devoted to Christ, whatever the circumstance, will get people's attention and will have critics turning into believers."

Jason concluded, "Just because you are a Christian, doesn't mean you live a perfect life. There are plenty of hurts. If we can come into a church and encourage them, build them up, edify them and get them to a place where they are excited about what God's going to do in their life, then we feel like we've accomplished our purpose."

For more on 33Miles visit the 33Miles artist profile