Welsh metal team 3RD DAY had them up and moshing at Greenbelt this year. The band spoke to Andrew Long. 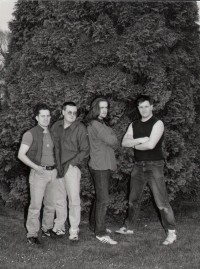 As long as you weren't an alternative worshipper dodging tabloid hacks you would have found much to enjoy at Greenbelt '95. But one familiar item was almost completely missing from the agenda, something that's contributed in varying degrees to the festival nearly every year. No, I'm not talking about rain and mud or liberal theology; I'm talking about CCM's evil stepsister, heavy metal.

There wasn't a lot for the moshers, certainly nothing that fitted into the mainstream metal category. One band took advantage of this situation, blitzing the site with fly posters bearing the statement "Like heavy screaming guitars? Born to mosh? Check us out!".

The band's name was 3rd Day and the campaign was a definite success as a large crowd of interested rockers piled into a tent to see what all the fuss was about. They managed to pull off a very successful gig, enticing the audience to its feet into a frenzy of head banging madness.

This South Wales band based around the songwriting team of vocalist Chris Edwards and guitarist Mike Spear has been around in varying forms for some five or six years and has been through several names and even more line-up changes. The current line-up seems to have settled down into a much more stable unit and the band have now reached a musical direction that all the members are happy with.

As well as Chris and Mike 3rd Day now features drummer Karl Albert and bassist Dougy Douglas, ex-vocalist of Third World Cafe (what a great band!) and after releasing a self-recorded cassette last year they decided that the time was now right to put in some serious studio time and record a "proper" album. I spoke to Mike and Chris to get the story. "We were fairly happy with the cassette that we did," said Chris, "but we felt that an eight-track studio didn't really do the songs justice. We wanted to spend more time on them and come up with something that sounded more professional. Also, we felt that in order to be taken seriously we needed to put something out on CD," continued Mike, "and the 8-track didn't have the quality to warrant that."

So off they trooped to Sonic Executive Studios under the guidance of producer/engineer Tim Hamil and began the process of laying down the songs in glorious 24-track digital sound. The band felt that Tim's input was invaluable in achieving the sound that they wanted. "We went in there with the raw material and we knew what we were looking for," explained Mike, "but having somebody outside the band to give their opinions was extremely helpful."

"Tim worked us hard," Chris continued, "which is what we wanted him to do, and we were able to respond well to the pressure. It's definitely paid off with the finished product. We spent a lot of time on things like vocal harmonies and they really sound great."

The album 'Paper Chain' reveals a band rooted in the mainstream metal market and yet other influences show through to build up a varied undercurrent. The tastes of the individual members are no doubt contributory factors. "I'm a big fan of Metallica and Joe Satriani," said Mike. "Karl likes to listen to Queen and is very much influenced by Roger Taylor's style of playing."

Chris's tastes are wide. "In the Christian scene I like bands like Split Level, Whitecross and Bloodgood, but I've been listening to rock bands for a long time now, going back to Led Zeppelin and Pink Floyd. My current favourites are Extreme and Gun. I don't really know what Dougy's into, but I did notice a Val Doonican CD at his house the other day when we were watching a Sonia video!!"

I asked them to explain the thinking behind some of the songs on the album. "Well, I write all the lyrics and Mike writes the music," explained Chris. "I began, like many others, by writing songs that were blatantly evangelistic, some of which are still in the set and have been included on the album like 'Fight The Fire' and 'A Simple Message', but the newer material has expanded to deal with other issues of life. 'Shoreline' is about suicide, 'Smiling Faces' is about religious cults and 'Wonder' was inspired by the birth of my children. So I began by writing directly about my Christianity and went on to write songs about things which affected my Christianity."

3rd Day have released "Paper Chain" in both CD and cassette formats and are currently seeking a suitable distribution arrangement, in the meantime the album is available from them via mail order. They are in the throes of setting up a tour to promote the album and would be interested to hear from potential promoters.

Future plans include continuing to seek bigger and better gigs. The band would also like to gain exposure into the secular arena. They've invested time, energy and money into the project and are therefore hoping to gain record company interest. Look out for them in your area soon.