6th Day Made: The eclectic pop rockers with "The Story Of Love" radio hit

Tony Cummings gives the lowdown on the pop rockers from Michigan, 6TH DAY MADE 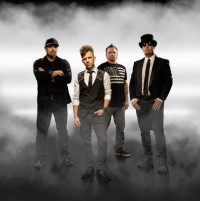 Currently getting airplay on Cross Rhythms is the Michigan-based band, 6th Day Made. The band, consisting of Jason Eaton (lead vocals), Randy "Doc" Healy (bass), Mark Maggard (guitar) and Jeff Trent (drums), have been around since 2009 but it's been their signing with Word Records and the release of their infectious debut single "The Story Of Love" which has brought them national, and now international, attention.

Maggard spoke about how the group got their name. "Each time the band gets together for rehearsal we spend the first half hour or so in a time devotion. Back in March we were reading the book of Genesis chapter 11. In it we read about the tower of Babel being constructed and those who were building it said, 'We will make our name great'. Immediately following that the Lord deconstructed what they had constructed and in the next chapter we see the Lord tell Abraham 'I will make your name great'. Around this time we had invited our fans to submit band names for us. The name 6th Day Made was suggested. Each of us liked it and it stood out amongst the others. It points to the creation account where man was created on the sixth day. Genesis chapters 1 to 11 also teaches us that God gives his best to those who leave the choice to him."

Maggard spoke about the band's eclectic style. "We have been described as having a Christian pop rock sound, a Britpop sound, even a U2 style. The truth is we have a diverse variety of influences including rock, pop, reggae, jazz, Latino, R&B, blues and Motown. So maybe Christian rock might be the best overall description!"

Now with the radio success of "The Story Of Love", a five-song EP will soon be released by Word. Said Maggard, "The project incorporates songs that are quite diverse from a driving, fist-pumping rock song 'Tell Me Why' to a Stray Cats pop inspired tune 'Who Am I' to a California vibe influenced 'The Day Of The Year'. There will be something for everyone on the project!"

6th Day Made are clearly a band serious about ministry. "We believe ourselves as an extension of the Church and so our mission is the same - albeit through music. We exist to exalt the Saviour and evangelise the lost and edify the saints and to feed God's people."