Worship leader IAN TRAYNAR visited various countries in Europe. What he found there deeply encouraged and challenged him. For he began to see that God is causing a "river of praise to flood across Europe." 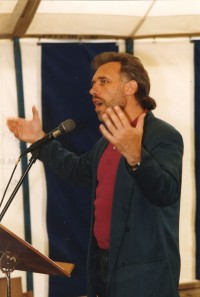 Fifteen of us, representing six nations, stood in a sparsely furnished room, around a cluster of tables. We were in a Roman Catholic retreat centre in the suburbs of Brussels in late September 1989 and this was our first meeting of the steering committee for Worship International '90.

We did not know each other very well; we were all tired from our long journeys, but there was a sense of excitement and anticipation about our gathering. I suggested that before we began any business we worshipped God together. I knew it was the right thing to do, but as the conference director it was also painful because I knew just how much work we had to get through in such a short time.

We began to sing "For Thou O Lord" - my first taste of multi-lingual worship as we all sang in our own different languages. We simply carried on singing in tongues at the end and I suppose it was partly the uniqueness of the situation that suddenly caused me to think that this might be a foretaste of what we could expect at the main conference in De Bron. Dare I believe it might be a foretaste of something much greater: Revelation 7:9 "...1 looked and there before me was a great multitude that no-one could count, from every nation, tribe, people, and language standing before the throne and in front of the lamb.. .They fell down on their faces and worshipped..." This was suddenly becoming very exciting.

In the midst of this worship I was prompted to read Ezekiel 47; this is the image of a river flowing from the threshold of the throne of God. I hadn't finished reading verse one when Graham Kendrick, standing next to me, excitedly interjected, saying "Threshold, threshold! I have had that word for the last five minutes but have not been able to relate it to anything." Suddenly we realised that God was speaking a special word to us at the beginning of this conference preparation.

From the threshold of the temple, He was causing a river of praise to flood specifically across Europe. We might be experiencing small oases of water as we dug our little ditches but a time was coming when this river would join all these oases of water in one mighty flow.

We eventually managed to get to business but not before Lars Enarson from Sweden had told us some amazing things that had been happening there. He told us that there was a growing sense that revival would begin in Scandinavian countries and then spread down through Europe, and that praise would release this revival. Where have we heard that before? In January 1989 he had held the first Praise Explosion, meeting with Christians from Sweden, Norway, Denmark, Finland and Iceland. Their guests included Phil Driscoll, Tom Inglis, and Arnold Borud who provided 24 hours of virtually non-stop praise! Even during this event people were saved as they worshipped. But Lars told us during a visit of the same project to Estonia, during the 24 hours of worship over 2000 people gave their lives to Jesus!

BELGIUM
This meeting in Brussels was the culmination of two years of research and travel. It began in November 1988 at the end of the Worship International Conference at Camber Sands. Although we wanted to include a number of delegates from overseas we were not sure how many would come. During the conference, there was a strong emphasis that we should be reaching out into mainland Europe and at the end we had a day retreat for specially invited worship leaders at which the seed suggested doing a worship conference on the European mainland. Franz and Yvonne Hookendyke from Holland's De Bron Conference Centre were present and immediately offered their services to this vision.

In May 1989 - I remember it was the day of the F.A. Cup Final because, as a Liverpool supporter, thought what a sacrifice it was to be going to a meeting - several of us met at Gatwick Hilton Hotel (Franz flew in specially for this) to finalise the proposals and fix a date. In June I spent a week and a half touring several nations to find out if there was a similar vision in these countries for staging a worship conference of this stature. We felt that it must be truly representational of European nations and not just a U.K. initiative. So I had to find out what God was saying about worship in these nations.

The overall response to the proposed event was very enthusiastic. But what I discovered God was already doing, has had a profound effect on me and has enlarged my vision enormously.

When I landed in Belgium, Rick Ridings, who was my first contact, said he had heard there was something exciting going on in Paris. Could we change our plans and go there straight away (some four hours by road).

This was all very exhilarating and I immediately agreed - people at home had prayed that I needed to be prepared for the unexpected. As we travelled I took the opportunity to chat with him and his wife Patti about Worship International '90. They were right behind the conference and had experience in some of the problems we might face. For example, they work in a multi-lingual church in Brussels and one of the obvious challenges is how to worship and communicate in all the different languages represented. They have great experience in having different translations of the OHP, and how to deal with the more spontaneous aspects of worship such as prophetic songs. It was during this conversation that I realised that worship not only unites Christians across denominational barriers but would unite us across language barriers too, by providing us with a common language - our love song to God. Rick was very keen that we encourage young people to attend, and this was echoed on my travels to Switzerland and Germany. It is the young people who are responding to "the trend towards joyful worship" as it was called!

FRANCE
I was still not aware of what to expect in Paris, but when we arrived I discovered I was about to take part in a prayer meeting that started at 7.30pm and went on to 5am the following morning. Around 2000 people from many parts of France were there, many of whom had just taken part in a torch run that afternoon from the seven gates of Paris, right to the centre of the city. As I joined in I could have been at a Pray for Revival meeting at the NEC, except that it was all in French. The worship too was exhilarating, the French being more exuberant and emotional in their response than the British. I was thrilled to hear how over the last year people in Paris had been taking to the streets to march and praise, but had never heard of MAKE WAY, or any other march initiative, when they started. They had simply been inspired by the Holy Spirit. We prayed on into the night for France in seven major areas, including politics, education, health and the arts. I felt this was very significant as France approached its bicentennial celebrations.

After the meeting I was taken to the home of Johan and Maryse Sode. They head up a very important organisation called LTC. It is like CMA in many ways, although at present its emphasis is on the translation of songs. They did most of the French work for the Love Europe songbook. One of the big problems facing many nations in Europe over the last few years has been the lack of a common translation of English worship songs. They are often imported to different parts of a country and then translated without any reference to, or knowledge of, any other version, with the result that there are many different translations of the same song. This has been a significant problem at larger, nationwide conferences. It is a difficulty we have not yet had to face in the UK, but with the current wealth of good songs in French and German I don't think it will be long before we do, and we shall have to learn from their experience. LTC is doing a very important job, as you can imagine.

At the discussions I held for WI '90 I had the privilege of meeting Robert Cau, the head of YWAM France, Thierry Delalaunde, pastor of a charismatic Baptist church in Lens (northern France), J. Thobois pastor of a church in the Paris suburb of Creteil, Yves Cornaz, who pastors four house churches to the north of Paris, and Claude Ruffo, who co-pastors one of the largest Baptist churches in Paris. There was immediate support for the worship initiative, and hold a church leader's conference parallel to the main worship teaching. Again this was echoed in the other countries too. From Paris I took the high-speed train across France and into Switzerland.