Aaron Shust: His radio hit "You Redeem" and his first live album 'Love Made A Way' 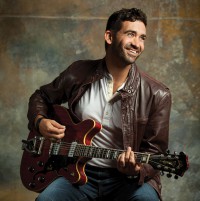 It's rare indeed for a live worship track to make it to the heady heights of the Cross Rhythms radio playlist, but such was the quality of the song, production and performance of the Aaron Shust single "You Redeem" that that is what has happened. Now Aaron's live album 'Love Made A Way' has been released and its artful blend of sparklingly arranged covers like Bethel Music's "Ever Be" and Hillsongs' updating of the Edward Mote hymn "Cornerstone" and vibrant new Shust compositions like "Lead On (King Eternal)" and "Heartbeat" show that the Chicago-born singer/songwriter has lost none of his winning ways with melody and lyric since he first emerged onto the scene in 2005 with his worship classic "My Saviour My God".

Shust spoke about his decision to record a live worship project. "I've always said that in a concert setting I want people to worship, so to have people singing along on the album is pretty magnificent. When I invited people to be a part of this live album recording, I wanted to make sure they wanted to worship. I didn't just want them to be spectators. I wanted them to be desirous of entering into the presence of God, raising their hands and closing their eyes if they wanted to, and that's how the night was. It was a genuine experience of worship."

For 'Love Made A Way', Shust invited some fine guest vocalists to contribute including the one-time Sanctus Real frontman Matt Hammitt, Passion's Christy Nockels, Grayson|Reed's Molly Reed and For All Season's Emily Hamilton. Speaking about the album's song selection Shust said, "This was a chance to take some of the songs we play live every night and freshen up the recordings. But I also wanted to write new songs and offer new thoughts, new praises and new worship."

Aaron continued, "I first recorded 'Cornerstone' in 2012 on my 'Morning Rises' album and 'Ever Be' in 2015. They have been staples in all my concerts ever since. I enjoy identifying and recording songs in the church that minister to me. It gives me an excuse to play them night after night. On 'Love Made A Way', I chose two more, 'Death Was Arrested' (from North Point Community Church in Atlanta) and 'Resurrecting' (from Elevation Church in Charlotte). Both of these songs speak deeply to my soul and it's my honour to sing them."

'Love Made A Way' was recorded not in a church but in a recording studio which helps explain the album's fine sound quality. Aaron told journalist Timothy Yap, "We recorded at The Tracking Room in Nashville, Tennessee, nestled just south of downtown and right next to my favourite pizza place! The crew on staff is highly professional and a joy to work with. It helps when you feel welcomed and that everybody there is enjoying themselves and not just showing up for another gruelling day of work. By the time the crowd showed up, we had played through these songs for five days and were ready to hear voices added to it. It was overwhelming at times to see people worship God, especially via the new songs. One of the more transcendent moments was at the end of "You Redeem". It's the only time throughout the entire evening that the response wasn't applause or cheering, but absolute silence. Sometimes that can be a bad sign, but this was an utterly holy moment."

The album was produced by Nathan Nockels, the man behind many of Chris Tomlin's finest recordings. Said Aaron, "I have admired Nathan's work for a long time with Chris, Christy and Laura Story just for starters, but what he's done with the annual, live Passion albums definitely drew my attention. There are a lot of moving parts in a live recording and to manage those well takes a level of brilliance few possess. The moment I knew I wanted to work with him, however, was after listening to Keith and Kristen Getty's live album, 'Facing A Task Unfinished', which is a spectacular album. I looked on the back of the album (yes, an actual CD) and who produced it? Nathan Nockels. Nathan brought an easy-going approach to the execution of every stage; pre-production, rehearsal and the actual event. He kept us laughing, but he kept us on track and on time. He would often say matter-of-factly, 'Hey guys, let's make music!' It was so focusing. It reminded me of the wonderful, fun, privilege we have to coordinate sounds, in a little community called a band, and create something beautiful."

"Hitting the 10-year mark, it felt like a new season," Shust said about deciding to take the plunge and create the live album. "We had a guest speaker recently at our church talk about how God is a God of celebration. God wanted to make sure his people were able to remember and celebrate their past. I felt that after 10 years, it was time to celebrate."