Tony Cummings reports on the steady rise of Texas-based ABANDON 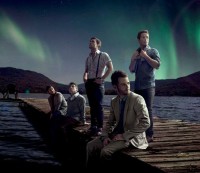 The release in the UK this June of Abandon's 'Control' album will bring to UK CD listeners a band who've made steady progress since the release of their 2009 record label debut 'Searchlights'. Since then the San Diego rockers have toured the US alongside Fireflight, Building 429 and Remedy Drive and brought forth a whole heap of critical praise which has compared them to a Christian version of The Killers. In fact Abandon- Josh Engler (vocals), Justin Engler (guitar), Stevan Vela (guitar), Bryan Fowler (bass) and Dave Vela (drums) - don't particularly like being compared to The Killers. Stevan Vela told Jesusfreakhideout, "The Killers are pretty creative and they have a great sound. But we don't try to copy them at all; especially with this new record. I don't think you can really compare any of the songs."

Abandon's rise in CCM popularity began through a distinctly odd set of circumstances. EMI Christian Music Group's director of A&R, Chris York, was in a Nashville restaurant in the spring of 2007 when his attention was drawn away from his meal by the sound of a band playing in a club next door. He later admitted, "It's definitely the strangest way I've discovered a new band. I could hear these guys playing on the other side of the wall, and it sounded really, really good."

He tracked down Abandon through MySpace and learned its duly providential story. Brothers Josh and Justin Engler had moved from their home state of Indiana to Texas while in high school, where they met cousins Dave and Stevan Vela at church. Gelling by jamming in the worship band, they felt a growing desire to write original music together as well. But after tracking a song at a local studio and playing some shows at secular clubs, there was still a desire to put more purpose into their performances. Said Josh, Abandon's singer and primary lyricist, "We liked playing music, but needed to find our vision. So we prayed about what we were doing and felt led to book a tour of churches and youth camps into the Northwest. We had no real experience doing this and just used the Internet to make contacts and Google maps to chart our course."

Along the road, Abandon befriended a band involved with the Seven Project, an outreach that visits schools to talk with students about seven different issues - sex, drugs, violence, alcohol, making good choices, etc. The conversations are nonreligious, but the weeklong process culminates with an off-campus rally and concert where faith is freely discussed. Said Josh, "We have stayed involved with that programme since then and it has helped us to see better the needs of young people and stay focused on reaching them."

After signing with EMI CMG Abandon went into the studio with producer Christopher Stevens. With the whole record industry convulsing due to the sharp decline in record sales, EMI showed extreme caution and initially released the five-song digital 'Abandon EP'. As it turned out, it produced a radio hit in "Providence" and after a further EP released in April 2009 finally the full length album 'Searchlights' combining the best EP tracks and three new-to-the-public recordings was issued by Forefront.

Many of the songs on 'Searchlights' deal with the theme of brokenness. Josh Engler told the website Newreleasetuesday, "We didn't really go into the writing process of the songs with a theme in mind. It mainly came out of our experiences with a public high school programme called the Seventh Project. We go to schools during the day and give moral education and play a few songs for the kids. Then, at the end of the week, we have a rally and present the Gospel to them. It's been wonderful and I feel that working with this programme has shaped us as a band. We've been writing the songs on 'Searchlights' for the past three years, while working with the Seventh Project and with public high school kids. If there is a theme of brokenness on the record, then it's really a parallel of the brokenness that exists in public high schools. These songs show what public high schools kids struggle with - things like depression and suicide, which both have a strong influence on high school kids. We named the album 'Searchlights' because it's kind of like a rescue effort. It's our heart to help and inspire these kids, to show them that life is worth living, and to show them that God has a plan for their lives. This is the message we want to get across to them. It's a shame that we can't talk openly about that during the school hours, but we do get to invite these kids back to the after-school rallies. So 'Searchlights' was born out of our experiences in public high schools."

Now 'Control is set for release. After the biting alternative rock sound of 'Searchlights', 'Control' introduces some surprising dance groove elements. Stevan told Jesusfreakhideout, "We all kind of wanted that feel, I think, for the first album but we just couldn't translate it as well. And then our producer Chris Stevens, he worked on seven of the songs on this album, he comes from a disco, funk background. He helped kind of hone all of our ideas and kind of compact it into some of the songs. We had a great time."

Bryan spoke about the theme that permeates the 'Control' album. "There is not a song called 'Control' but there are a lot of songs that kind of deal with what we're talking about. It's kind of like a question, 'Who has control of your life?' We put the Northern Lights on the cover to kind of show how when God has control of something he can do what he does best something beautiful can happen; because the Northern Lights aren't man-made you know, they aren't made by us at all, they're just a natural occurrence. And if you're a believer then you understand that that's something God has created. A lot of times we try to take control of circumstance and try to figure out what happens next and plan for the future. We always want to know, we always want to have a plan. But God, if you give him that control, he can really take your life in a much better direction and you can have a blessed life. We have the song 'Let It Go' that talks about letting go of that control, and the song 'Help'.

For more on Abandon visit the Abandon artist profile