According To John: The US band playing at the Cross Rhythms festival.

Welcome visitors to this year's Cross Rhythms test in Devon are America's ACCORDING TO JOHN. 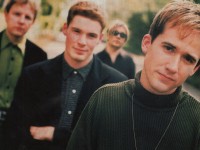 The modern rock band According To John have made a successful launch into American CCM big time. And their album debut 'A2J' has unexpectedly charted in the UK's Premier chart. Now, with Britain looking forward to their UK debut at the Cross Rhythms Festival these thoughtful purveyors of acoustic-tinged, Jars Of Clay style rock seem poised to attract thousands more British fans.

John Waller of Fayetteville, GA, is the lead singer and catalyst of the group. Jeff Billes, the drummer, is also from Fayetteville. Ed Bunton, bassist, is from Lawrenceville, GA, and lead guitarist Jason Hoard of Griffin, GA, is the newest and youngest member. According To John counts as their collective musical influences some of folk and rock music's most trend-setting acts. They present the skilful story telling lyrical artistry of Peter, Paul And Mary, the intensity of The Doors, the close harmonies of Crosby, Stills And Nash, and the rock edge of Tonic. They also consider Steven Curtis Chapman, Steve Camp, Russ Taff and PFR as early influences.

Waller, Billes, Bunton and Hoard each contribute to the music and the ministry in their own way, style and technique. Te result is a synergistic, refreshingly original and penetrating message, wrapped in mood-enhancing arrangements and brilliant musicianship. On the group's KMG Records debut, 'A2J', they team up with producer Billy Smiley for a project that hits with the impact of a bolt of lightning. "These songs are all about hope," explains Waller. "'Everlasting' is about hope for eternity. 'Marquee Graveyard' is for restoration. 'Remedy' celebrates hope for victory in the daily battle between the flesh and spirit. Jesus is hope. We are nothing without him. No matter how good we think we are, we have no hope or purpose without Jesus."

While some lyrical contributions came from Billes, Wajler and long time co-writer Scott Johnson account for most of the lyrics on this project. "The cool thing about the lyrics," says Billes, "is that John and Scott write about real things that they are learning and going through. They don't just dream up catchy hooks to try to crank out radio songs." Waller agrees, "We want the songs to always be life-stuff'."

The critics agree that Waller is one of Christian music's most promising new writers. He is three-time winner of the Babbie Mason Regional Songwriting Competition, including a win of the Grand Prize - a trip to Estes Park where he won first place in the contemporary rock category. After years of performing as a solo artist, Waller began putting together a band. "John came to my church to sing when I was in the youth group," recalls Billes of their first meeting. "That's right," Waller agrees. "I was singing in area churches, doing a solo thing. I met Jeff about seven years ago, and he started doing sound for me. He started playing the drums and we began praying about putting a band together."

The pair auditioned for the First Baptist Church of Woodstock, GA, youth evangelism outreach programme known as Big House. "When we showed up," remembers Billes with an embarrassed grin, "there were about 40 kids there. The guitars were out of tune and we were really awful! But the student pastor, Jeff Chandler, saw our hearts and I guess some potential, and gave us a shot as the house band." For two years they spent Wednesday nights with the youth in Woodstock, then Sunday nights with the youth of the church they have since called home, New Hope Baptist Church in Fayetteville. They added Bunton during that time, developing material ad perfecting their craft. It wasn't long before they were in great demand throughout the entire southeast region.

About a year and a half ago, the final member, string virtuoso Jason Hoard (if it has strings, he can play it!), came on board, and According To John was complete. According To John was not a name chosen lightly. "John is the 'Gospel of Love'," says Waller. "If we have a theme song on this project, it is 'Everlasting' (John 3:16). I recorded it years ago, but wanted to have it on this album because it is about the intimacy that God desires to have with us all. We want to have, and communicate that it is possible to have, a close, authentic relationship with Jesus like John did. That's why we dive into the Gospel 'According To John'."

Waller sums it up. "It's about stewardship. There's a holy urgency and joy in just doing what God wants us to do with what he gives us." Once you hear According To John, you will agree that it is a mantle that fits them very well.