Ad-Apt: The Manchester MC offering some healing for broken people 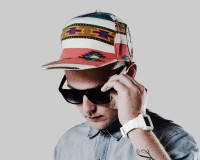 Manchester-based MC Ad-Apt has a growing reputation in both the mainstream and the Christian urban music world. Followers of mainstream music will know him for his work alongside some of the industry's best known club music names such as Andy C, Shy FX, Chase & Status and Ronny Size. Followers of Christian music will remember his dazzling contributions to thebandwithnoname (as MC Presha) in the band's original lineup including work on their classic album of 2002 'The Blitz' and his more recent equally jaw-dropping work with Lindz West's LZ7 collective. Now Ad-Apt is making waves touring with a full live band which includes UK beat box champion Hobb and his recently released two EPs 'Broken Bones' and 'Broken Bones Remixes'.

Cross Rhythms recently caught up with the rapper, born Adam Brown, who began performing in youth clubs under the name MC Blest, became MC Presha when he joined thebandwithnoname and has been Ad-Apt since 2007 when he contributed his fiery raps to a couple of releases by Aorta on Rubik Records. Adam/Ad-Apt began by talking about the 'Broken Bones' EP. "To me the whole EP is a collection of some of the songs that I've been writing over the last few years. Some are from personal experience. Some are just my views and my opinions on the world, life, faith and whatever. And for me the title 'Broken Bones', that song is all about people that are hurt, people that are broken as far as just everyday people we all go through things that are going to break us at some point and it's not what we go through necessarily but it's how we deal with it and how we as other people around those people can support them. So it's quite a deep meaning behind it really. It's quite a dark track but it's got a lot of energy at the same time. So that to me was a standout track and it spoke to my heart at the time that I was writing the record, so that's why I used it as the title track."

Adam left thebandwithnoname in 2007. He explained, "I carried on working with Mark and Zarc at Innervation because I loved what they were doing and still wanted to have my input. Thebandwithnoname still wanted me involved which was great to be involved from a backseat point of view. The following that I then started working in prisons and I did a lot of project work through an organisation called Lock Down And Reflex which do a lot of work with young offenders using music and drama and creative arts to connect with guys or girls that are in institutions, that have not got a lot of hope and maybe don't know what to do with their lives using creative arts to maybe question that and say that you can rewrite a rap about your life and maybe express your life in a different way. And try some new skills and we've seen amazing things through that project. I've really got a love that and I really enjoyed it and it's stuff that I'm still involved in now actually because it's something that I love doing and I love seeing the results of that. Following that I then started featuring on a few records with different deejays and producers that I respected and people called me up and say 'hey come and jump on this track' and I love song writing and so to be able to do that but it came to the point where I really needed to get my own thing out, I needed to release something solo."

One of Ad-Apt's memorable contributions to another artist's record was his rap on schools evangelist BeBe Vox's "All This Time" single. Said the rapper, "That was another project set up by Innervation, so out of the family camp, Mark and Zark got me involved. It was kind interesting because that was a pop record, full on pop. I'm not going to lie, I don't mind writing a bit of pop now and again. I try and keep it cool with hip-hop and dub step and stuff like that but a bit of pop is always good for the soul. It's a good laugh. She's a great girl and she did a great job with what she's doing." 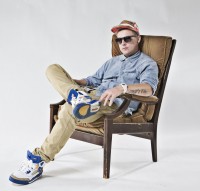 Ad-Apt has had a long time musical association with DJ/hype man/producer Ben Jack, better known as Galactus Jack. "I've worked with Galactus for a long time now, even going back to his Aorta days." Another long term friendship has been Lindz West of LZ7. He said, "I was with LZ7 for a long time, investing in that, helping do some of the song writing and working on the live show. And I love performing with those guys, so much energy on the stage and we've seen some great crowds and we've been to some great places and played some great arenas. Lindz is a great communicator and he uses that music in a great way to do that and even seeing the schools work on the side has been really humbling and they'll never take that away from that project which is a beautiful thing. It got to a point where I thought right I've got to branch out, I've got do my own thing and step out on my own. It was a healthy break away and they kind of said just go and do your thing."

Adam was heard on a Cross Rhythms turntable hit, "Heartache" found on the 'Beat The System' album by drum'n'bass maestro BCee. Ad-Apt spoke about BCee, otherwise known as Steve Jeffery, "He's like the clean man of drum'n'bass, that's what all the industry in drum'n'bass call him, they respect him. He's a great business man, he's a really humble guy, he's worked hard, he's got a great ear, he knows what's good, he doesn't put out bad stuff, running the label Spearhead Records. I've known him for a few years really just from being around. He sent me an idea for a track and I really liked it, loved the beat and caught it straight away. I started writing to it and so 'Heartache' was born out of that track, which is all about a love, a break in a relationship, like losing somebody in a relationship. It's quite a deep track that had a bit of a maxi jazz, kind of Faithless kind of twist on it with my voice, but quite chilled."

Ad-Apt has some interesting views about the changing face of hip-hop culture. "The terminology changes. When hip-hop started freestyle meant to literally improvise and make things up on the spot but now you see on youtube a lot of the emcees and rappers out there, it's raps that they've already written but they'll do it over a beat that it wasn't written to. So it's, 'Oh we're just putting it on a different beat, so it's free style'. To me that's not as deep as it always has been. That's quite easy. With a name like Ad-Apt I like to think that I can adapt to different styles. It's kind of my day to day job really."

Ad-Apt continued, "Also in hip-hop there's always this battle of underground and mainstream doing commercial and 'oh you sold out' and it's blown up."

So how does Ad-Apt go about creating his music? "I usually start with a track first and a beat and the idea and then the concept. I think you need to know the tempo and the rhythm and to kind of feel and then you can build around it. For me it's kind of then coming up with a theme, a subject and then something that I want to say or to get across. Sometimes I start writing some bars and some lyrics and then I have to leave it for a bit then come back to it and change bits and I'm on a fresh page and it's rolling again. But there are other lyrics that I've written in a couple of hours. If it just comes to you, it's that kind of thing." 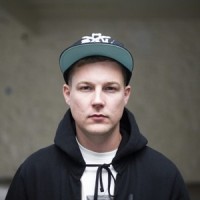 One of the things which attracts Ad-Apt to the whole of hip-hop culture is that it is not dependent on a great deal of expensive technology. He commented, "I think a lot of young aspiring rappers and emcees can get hold of really cheap gear. As long as you've got a decent mic and a reflection field to sound proof, it's good. We've got a little recording studio in the house I live in, with a friend of mine who's a singer/songwriter. It's quite a creative household. So we've got a little room that's dedicated for work and it's just a simple set up, it's got an Apple Mac computer but apart from that it's pretty cheap."

Adam returned to his favourite subject, the 'Broken Bones' project. "I've got a mixture of stuff on there, obviously 'Broken Bones' being about reaching out to people around you. 'Guilty' features Josh Record, that's actually inspired by a young offender, so doing the prison work has inspired me. It' all about how he was feeling, he was a 16 year old lad serving a life sentence and for him his whole world has crumbled and that really caught my heart and I really wanted to put that on a record and give a bit of that back. 'My Time To Grow' is just talking about pressing on, just keep going and don't give up. 'What You're Living For' is pretty self explanatory, especially working in prisons and even in the music industry you see a lot of people who are actually quite lost in life and don't really know what they're doing. They make a lot of money or they see a lot of success and they don't really know what they're living for. I'm not saying I've got all the answers and I'm completely fulfilled in life but there's definitely having that faith and having something to hope for. A bit of hope in your life it definitely counts for something. So that's very self explanatory. 'The Winner Takes it All' is actually about an old relationship that I had that fell apart and that's just kind of talking about moving on and being the better person in it. Yes, I try and keep on a positive and I want to be real at the same time. I'm not just going to talk about flowers in a field and keep it all fairy dust, it's got to be real and so I hope that I can get a balance of that."