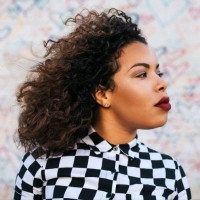 It was an article with the intriguing heading "Female rapper scared by Satanism in LA's music industry, turned to God" that first alerted Cross Rhythms to Boston-based rapper Ada Betsabe. Since then Ada's songs "Corazon" and "God Body" have made it to the xRhythms playlist and shown that this immigrant from the Dominican Republic is one of the best rappers on the whole US scene. I talked at length to this bold and passionate communicator of spiritual truth.

Tony: Let's begin by telling me about your tracks "Corazon" and "God Body".

Ada: Sure. First thank you for taking the time to talk. It's good that we can connect, even being so far away. "Corazon" and "God Body" are two songs off my EP 'Personal', which is a six-track EP that I released in May 2018. It was a very personal EP. I had just had a season where I was going through a lot of doubt and not believing in the purpose that I felt God had called me to walk out on the earth, which is to impact the world with my music. It brings hope and life and positivity. In the end it's really about Christ. "Corazon" is me speaking about how I strayed in this time, when I wrote this song. There's a line where I ask God and say "Remember when I didn't have anything?/Remember when nobody knew who I was?/Remember that I used to wake up and pray and I slept with my Bible under my pillow?" I'm reminiscing on these days when I felt like I was really pursuing God. "Corazon" means heart. I guess the summary of the song is these words that you've written are on my heart; maybe I'm not walking it out the way I wish I was. But I just want to remind you that I still love you and it's on my heart and I'm going to continue to walk this out. So that's "Corazon". I didn't think it would be accepted the way it was because it is a very personal thing but I guess people can relate.

Tony: I'm sure they do. We can pretend that it's easy to follow God but in fact it takes a huge effort on our part and we have a tendency to stray, don't we?

Ada: Yes, and I think that's what the journey is. I think when we "sign up" for this (I'm a millennial and that's the word we use), when we receive Christ we start this journey. We need to be better at telling the newcomers that this is not an overnight process. It's definitely going to take some falling and some getting up. It will prepare people a lot better for what comes, the battles that come. The EP goes through a journey and you get to the last song, which is "God Body". That's me declaring I have God in my body and I'm not going to budge. I'm going to go and do what I need to do and at the end of the song I say "can't you see I have God in my body?/I fall seven times and get up eight." My EP 'Personal' is a journey; it goes from me being in a low place, getting emotional, realising grace is enough and the last song is "God Body".

Tony: Now, let's go back and talk about your early life. You're an immigrant from the Dominican Republic. What year did you go to Boston?

Ada: I came to the United States when I was three and a half. My father's dad is a pastor in a big association of churches and they said "We want to move you to another country." My grandfather, my father and all his siblings were to come to the United States - it was hard for my parents because they were already married and they had us. We waited in the Dominican Republic for a couple of years and when I was three and a half we moved to Boston and I've been here ever since.

Tony: Growing up in the Church can be a wonderful thing but it can bring its own pressures and difficulties. I understand there were some issues of control and even abuse going on within the church.

Ada: Oh, yeah. The church is a hospital for the broken, not a museum for perfect people. I grew up in environments where there was a lot of that brokenness. Sometimes one person can handle something and another person can't. A lot of the abuse I saw, abuse of power, I was a really sharp kid and I noticed a lot of things. I've always had the personality that I stand up for myself. God gave me the gift because I needed it for what I'm doing, my career and my purpose. I witnessed a lot of abuse and manipulation and I saw people who were one thing in church and outside they were something else - of course works in progress like all of us are. It affected me in such a way that at 13, 14 I was already saying I don't want to serve God, I don't believe in God, this is all fake.

Tony: Were you into music at this early age? Listening to music on the radio and really enjoying it?

Ada: I grew up in the good old days when music wasn't the way it is now. All the mainstream stuff today is about doing drugs and getting it on with multiple people. It was the best time for music, the '90s, the early 2000s. But then there was a little bit of gangsta rap that was starting to climb up the charts. I listened to a lot of that stuff. My parents wanted me to listen to gospel music all the time. Secular music was completely off limits but that just made it more appealing. I wasn't able to listen to it so then I wanted to listen to it even more. One of the first albums I started listening to that made me want to write was Notorious B.I.G. 'Ready To Die'. An 11 year old with absolutely no gangster experience but hearing his stuff made me feel like I was. I started writing to some of the songs. I would listen to them and write over the song and then rap to the beat of the song with the same cadence that the song was in originally. I guess it was like training for myself for rapping.

Tony: Did this rapping develop into anything professional?

Ada: I didn't try to pursue it right away. It was just a fun thing to do. I went to high school and that summer between high school and college I wasn't just strayed from the church, I was actually losing myself. I do believe that there are people who can be hurt by the church. I made a decision to pursue a lot of things that I knew were not right before the Lord. I lost my faith and my fear of God. I was like ok, I'm gonna go do drugs, I'm gonna go do this and that. When I was in that place, that's when I started to feel the void, because I had now removed what was filling my void. So music and women and men and weed and drinking, partying - all of these things started to pick at that place in my heart.

Tony: In terms of your sexuality, were you surprised when you felt certain attractions to women or was that something you'd pushed back from an early age?