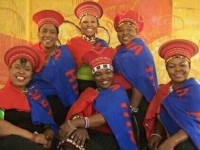 Mention South African music and Ladysmith Black Mambazo will be the first name that trips off most people's tongues. The legendary multiple award-winning vocal group came to the world's attention in 1986 through Paul Simon's seminal 'Graceland' album and subsequently paved the way for countless other South African acts to ply their own version of the joyful rhythmic sound based around the African nation's indigenous vocal styles.

One such act is the all-female Afrika Mamas who, having been inspired by their Ladysmith Black Mambazo forefathers to establish themselves on the global stage, fulfilled a dream of sorts by recording their latest album 'Iphupho' at Durban's United Rhythm Studio. Fittingly, the studio of choice for the Mamas' fourth album just happens to be co-owned by Sibongiseni Shabalala, the son of revered LBM founder Joseph Shabalala, effectively closing the circle on both groups' indirect but nonetheless intertwined history.

Formed in 1996 by Afrofolk singer Tu Nokwe, the Afrika Mamas were initially named Women Of Afrika and consisted of singers who had previously worked as backing singers for a range of established South African and Afrikaans artists. In addition to merely entertaining audiences, Nokwe was keen for the group to educate people on African life using indigenous folk tales, songs and drama as well as striving to break through as an all-female act in what was primarily a male dominated genre. Incumbent leader Ntombi Lushaba replaced Nokwe in 1998 and changed the name to Afrika Mamas and, thanks to the drive of all involved, success wasn't long in coming with their 1999 debut album and 2007's 'Bayalibuza' receiving various nominations in the same South African Music Award categories as their Ladysmith Black Mambazo heroes.

Beyond their home continent, the Mamas began to tour extensively with visits to countries as far afield as China, Belgium, Holland, Sweden, Spain and Great Britain which helped to establish the group as a force to be reckoned with on the world stage. Appearances at prestigious events such as the 2012 Olympic Games in London, a range of Black History Month festivals in the UK and the award-winning Essence festival in New Orleans have helped further cement their reputation on foreign shores whilst, in 1999, the late Nelson Mandela chose the Afrika Mamas as his entertainment of choice at a national event during his term as South African president.

With a further two albums under their collective belt (an eponymous 2016 release and the aforementioned 'Iphupho' this year), the Afrika Mamas continue to go from strength to strength and now consist of six singers who take on a range of vocal duties from bass right up to soprano. Significantly, each Mama is a single mother and their life experiences are reflected in the subject matter of their songs with the latest album in particular honing in on the plight and challenges of women in today's South Africa with defiance and a determination to change things for the better.

I caught up with bandleader Ntombi Lushaba on a long distance phone call to her home city of Durban to ask her if the group was pleased with the reaction to the latest album. "We are overwhelmed with the response," she enthused. "We love all the feedback we've had about it from all around the world. The reviews are very nice and they're making us work harder!"

It's widely recognised that the genre of South African a cappella music is largely a male-dominated one and I asked Ntombi if it is difficult for an all-female group like the Afrika Mamas to compete in this environment. "It is not difficult at all," Ntombi replied defiantly. "What men do, we can do as well. As women, nothing can stop us. When we started out, we wanted to follow every step that Ladysmith Black Mambazo took. We want to be famous like them all around the world. We are already famous now but we want to be more famous - just like them."

With a number of the tracks on 'Iphupho' tackling different aspects of womanhood from lack of respect from the opposite sex in "Ulwabishi" to the inner strength of womankind in "Umama Uyagula", it's clear that the subject of female emancipation - whether it be social, political or musical - runs deep in Ntombi's blood. "My aim was to remove the stereotype that men can do things better than us," she expanded. "I wanted to show the world that women are equal and that no one - man or woman - is better than anyone."

This equality is clearly evidenced in the sound that the Afrika Mamas make and I asked Ntombi to explain why they lack nothing sonically compared to their male counterparts. "It's because we've got bass," she explained in matter of fact fashion. "We've got two ladies, Sibongile Nkosi and Sister Zungu, who sing bass beautifully. We've also got a tenor called Fikile Busisiwe Mhlongo and I sing soprano with Nonhlanhla Nhloe Dube plus we've got Sindisiwe Khumalo on alto. Our group is special because we can sing all the parts that men sing. We've got instruments in our tongues!"

Since the group's formation, numerous countries have witnessed first-hand the joy and passion that the Afrika Mamas bring through their music. "To be known out of South Africa means a lot to us," advised Ntombi. "We want to conquer the world - we want the world to know that Afrika Mamas are here to stay!"

With the Afrika Mamas having appeared at events such as the London Olympics and a variety of international festivals to their name, I asked Ntombi to recall what it was like performing for the late Nelson Mandela whilst he was still president of South Africa. "Oh, we loved Mandela," she sighed. "I remember the day he invited us to entertain him with our music and it was like a dream come true for us. That's why we wrote the song 'Tata Madiba' on the new album - just to thank him for what he did for the country of South Africa and what he did for the world as a whole."

In closing, Ntombi expanded on the Mamas' goal and the secret of what keeps the group going. "We want to teach the world whilst entertaining them. When we sing, we make sure we leave a mark - we want the world to know what South Africa is about. Our kids keep us motivated. Looking at our children, we want to see them grow and get an education. We want to see them get the things that we never got from our parents. They make us want to create more music for the world to hear."