Tony Cummings gives the lowdown on the British-influenced band from LaGrange, Georgia, AFTER EDMUND

In March Authentic Music released the album 'Hello' by After Edmund. As it turned out those privileged to hear it (Cross Rhythms are currently giving a little airplay to the track "Thank God") are already suggesting it's one of the outstanding releases of the year. So who are this band of musical eclectics who sometimes describe their music as "British rock for Americans"? Mike Rimmer met up with the band in Nashville and quizzed them about their history. Said lead singer Mitch Parks, "We are based out of a little town south of Atlanta, Georgia called LaGrange. We've been a band for about six years. We all got together in a little dirty office space and just started playing some music. We met through some mutual friends at college. A couple of these guys attended the music department at LaGrange College. We come from so many different backgrounds and such a diverse group of influences I think the sound is really reflected by that in each person's contribution into the song writing, into the arrangements. We try to make it us and try to make it absolutely genuine and exactly the way we want to express ourselves."

The band got their name from a Turkish Delight-loving child popularised by a certain British author. Said Mitch, "We struggled for a while to come up with a band name that was appropriate; one that would have some meaning behind it. After Edmund is referring to Edmund in the CS Lewis Chronicles Of Narnia. The 'after' part is to say we are like Edmund. We are in Edmund's shoes and that like Edmund we have all fallen and like Edmund we have a chance for redemption through Christ."

After several line up changes by 2005 the personnel of After Edmund was established as singer/guitarist Mitch Parks, keys player Yates, bassist Matt McFadden, guitarist Ben Hosey and drummer Adam Stanley. The band recorded a couple of independent albums before signing with Slanted Records in 2006. Their 'Hello' album is described by their record company as being "for fans of Mute Math, Starfield, Keane, Oasis, Snow Patrol and My Chemical Romance" but even that only covers some aspects of the rampant eclecticism running through the group. Matt McFadden commented, "Obviously, who and what we listen to influences our music. But we don't aim to sound like anyone or any particular genre."

One of the outstanding songs is "Thank God" which to one critic sounded a bit like The Killers. Said Yates, "This is a song which we really kind of enjoy live. Just a high energy song that we like to rock out and go kind of crazy with like the radio thing. Actually the lyrical idea, the hook came from Mitch. I really like the lyric of the chorus, 'Thank God I lost all my hope and everything that isn't you.' It's basically saying that all this stuff I trusted in before is no longer important and thank God I am trusting in him." 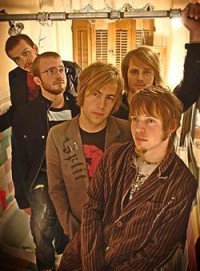 Another powerful song on 'Hello' is "Come And Rain Down". Explained Mitch, "The song was actually written right after the hurricane disasters and everything that happened with Hurricane Katrina in Louisiana and some of the Southern States. It really talks about that point of desperation you get to when you just feel like it cannot get any worse than this. That's actually the first lyric of the song, 'It doesn't get any lower than this.' The verses are from a perspective of someone who has had some horrible things happen to them and whatever they are, you can use your imagination, and then the pre-chorus: 'Come and rain down, come and rain down.' The chorus is about God's perspective to man. 'In the darkest room there is a light on for you. If you are too weak to move I am your strength.' It kind of goes back and forth and then in the end we just sing, 'Come and rain down on me Jesus.' We just sing Jesus take this situation and be in control."

During his interview Mike Rimmer provoked a lengthy discussion with the band about the non-direct nature of some of After Edmund's lyrics. Mitch set out the band's point of view. "I do think that it's important that we don't limit the message of Jesus to 'church people'. The message of Jesus is for all humans. It's for every person that lives on this planet. Sometimes it's very easy to turn someone's ear switches off just by saying 'holy, holy, holy' a million times, which I think is awesome in the church. That's what the angels sing. What a great song to sing! But I think it's important to be real with people [outside the Church] and to be very straight forward in what you are talking about. Like in the song 'Fighting For Your Heart'. It's a sort of negative, dark song. It talks about failures and opportunities that have gone sour and we talk about how God is absolutely fighting for your heart and your trust and everything. It was all in this stuff that went bad and God wants your trust, he wants your faith, he wants your hope, he wants everything."