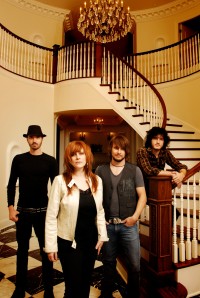 The recent release of 'We Will Not Be Silent' by Alabaster Box received an enthusiastic review from Cross Rhythms with its powerful pop rock sound, challenging lyrics and the kind of crisp production that Nashville specialises in. However, the group aren't from Nashville, or even the USA, but are Australian through and through. Having relocated to the US two years ago, Alabaster Box are now going in the same direction as several other Australian Christian music acts. In fact, Rebecca St James' brother Matt Smallbone is a member of Alabaster Box. The lead singer of the group is a powerful vocalist, Naarah Seagrott. She spoke about the independently released 'We Will Not Be Silent'. She said, "Initially we felt that a number of the songs had the theme 'We will not be silent' but I don't think we realised how consistent it was until we actually finished the recording and listened to the songs in the order they are on the album. We have been through some highs and lows over the past years but despite all of that we have always wanted to keep our focus on serving people and encouraging them to stand with us and make a difference in this world. Each song has its own story behind it but I think they have really come together to make that one statement, 'We will not be silent.'"

Alabaster Box were formed in 1997 on Queensland's Gold Coast, with four members, Brett Seagrott (lead guitar), Naarah Seagrott (vocals), Ben Woodward (drums) and Sam Hatch (acoustic guitar). The original focus of the band was to serve the youth at Christian Community Church, Gold Coast. By mid-1999 Joshua Brown (keys) and, shortly after, Matt Smallbone (bass) had joined the group after they had won a Brisbane radio station Creative Challenge talent search. The band's self-titled debut album was an immediate success in their homeland, winning three Sunnie Awards including Best Pop Album and Best Gospel Album. The hit song on the project and one which got considerable Cross Rhythms radio airplay when they stumbled across a copy was "Is There Anyone There". Said Naarah somewhat ruefully, "We used to play it a lot! It was the first single to receive national airplay for us and we performed it all over Australia. I remember the guys finishing it off in the studio, we were just so excited to actually be recording. When we heard it while on the road touring we would get so excited but were often in places with bad radio reception so we would drive to the top of a hill just to make sure we could hear it better and stop on the side of the road until it was finished."

The next few years saw Alabaster Box touring regularly across Australia and New Zealand. Remembered Naarah, "No one really was doing what we were trying to do in Australia. There were some difficult times at the start. When the bus gets a flat tire in the outback, hitch-hiking to the nearest town is the only option. You said your prayers and hoped for the best."

The band recorded their second album in 2001, 'Main Attraction', at Melody Hill Farm Studios in Kentucky with Vince Emmett producing. Three years later another album, 'Love On The Radio', was released followed two years after that by a DVD, 'Live At Ripley Road', filmed in Ipswich (that's Queensland, not Suffolk). In February 2006 Alabaster Box took the huge step of relocating to Nashville. Naarah spoke about the decision: "We had toured a number of times to the States prior to our move and had formed a lot of great friendships and relationships. After six years of touring in Australia, everywhere from the outback to the cities, we felt we had gone as far as we could and it was time to step out from our comfort zone. We spent years talking and praying about it and finally reached the point where it seemed like a natural progression for us."

Cross Rhythms asked Naarah how it felt to move from being a big fish in a small pond (the Australian Christian music scene) to being a small fish in a vast ocean (the US scene)? She responded, "The first year in the US was pretty tough touring as we were not known in the States and people were still finding out who we were. It was almost like being in a baby band again. You have to be committed to touring even though it feels like you are starting again. The good thing is though that this time around we had experience behind us of six years of touring and playing in Australia. Now that we have been living here for two years we have built some amazing relationships with some great people and churches who have helped support us and tell others about us. The experiences that we have had here have truly helped us to find our own voice as a band and we have learnt to be obedient to whatever God may have for us, here or anywhere in the world."

There was of course a certain amount of culture shock to overcome, as Naarah admitted, "I think we would all agree that the food here is not the same! We miss our meat pies and coming from the Gold Coast we really miss our fish and chips by the beach. It took a little while to adjust and try and figure things out. I think the most embarrassing thing for me was when we were taken out for breakfast and they served biscuits (which look like scones) with a white gravy (which looked like porridge) and I started to eat the gravy just like I would porridge. The Americans thought it was so funny and told me I had to put the gravy on top of the biscuit and eat it like that. I couldn't do it!"

Musically the band have moved a long way. There is a gutsier rock approach on 'We Will Not Be Silent'. As one of the group's main songwriters, Naarah admits to a wide range of musical influences. "I love the English bands like Delirious? and Coldplay as well as the Aussie rock band Silverchair. I also love the worship of Hillsong United and one of my favourite female artists would be Brooke Fraser. So the influence is broad and varied and I think all these sounds help you create who you are musically. I think the additional element is being in a band where each individual and the producer all have their own influences from music they like, so when we come together all those influences help create the music we play as a band."

When asked what stood out in Naarah's mind about the 'We Will Not Be Silent' recording sessions she responded candidly, "My huge stomach! I was eight months pregnant while we were trying to get the album finished before we went home to Australia to have the baby. Thankfully while I was recording he stayed mostly still but it was a very different experience for me as a singer as I was always tired and hungry! Studio work was always a challenge for me but I have learnt to really love it. We had three different producers for this album. It was great working with all of them because they each had something different to bring but it still came together really well. Our focus on this album was to also create music that we would enjoy listening to and playing. We had a lot of fun being creative and trying new things. These new songs have a pretty huge range for me vocally so it really stretched my voice. I just knew that I wanted it to sound powerful and I did it all with a baby in my belly!"

Since their relocation Alabaster Box have slowly but surely gained a sizeable US following. Said Naarah, "We have learnt so much while we have been here. It's very different from home but we have had some amazing opportunities to play alongside some of the biggest names in the Christian music industry. Some of our most memorable shows would be with the Newsboys and Michael W Smith."

Alabaster Box have shows coming up shows in Australia, Hawaii and New Zealand and will then be returning to the USA for Christmas. Laughed Naarah, "It will be our first cold Christmas! Then over the holiday season we will be partnering with Global Benefits, an organisation here in the States who are creatively finding ways to engage youth to tackle the immense need to support the poor and needy in this world. In particular these events leading up to Christmas will focus on raising enough money to rehabilitate six wells in the war torn nation of Sierra Leone in Africa. We've wanted to do something with them for a while now so we are very excited about this."

Naarah continued, "Then of course we hope to keep writing and putting together another album for somewhere in the near future, maybe even a trip to UK! Life on the road is constantly changing; you have to be ready for anything. We're excited about our future even when we don't really know everything it entails but thankfully God does."

The most important spiritual lesson Naarah has learnt recently is that God is always in control. "It's funny but I think we have been learning this for the past two years. I have personally been through some of the toughest times in my life while being here but through it all I can only see God more clearly. He painfully and slowly peels away me so that He can be more visible. We always pray this prayer but to really live it is a different thing. Sometimes I wish God would speak in an audible voice and answer my questions more promptly, but if it was that easy would we really search him with all our heart? I believe we should never stop seeking and searching for God. When we get caught up in the demands and pressures around us we become consumed by the worldly things."

where can i get lyrics for we will not be silent???

And people will stand
For liberty, liberty
Forgiveness of man
Whoâs bored with
This bored with this
Reprise and our lives will not beâ¦