Alkendria: A funky soul sister born and raised in Mississippi

As R&B gospel diva Alkendria boldly declares on her current Cross Rhythms turntable hit "Country Girl" the singer was "born and raised in Mississippi." The sizzling track in question has been around awhile, emanating from a 2007 album 'Thank You'. Alkendria admits to being surprised about its exposure on the Cross Rhythms stations. "Yes, I was really surprised. It just goes to show the power of God when we take the limits off him and just commit our works unto him. He will take care of the rest."

"Country Girl" is as truly as autobiographical as it sounds and though she now resides in Houston, Texas, she is really a downhome girl. Says Alkendria, "Back home we build houses, put 'em on land handed down from generations as an inheritance. We lay out the welcome mat, 'help yo-self to a plate real southern hospitality,' make no mistake. I am that country girl and actually worked in fields as a youngster. I shucked corn (peeled and removed the husks), shelled peas and picked various fresh fruits and vegetables. I have to say it definitely made me appreciate the simple things in life."

Alkendria was born in Hattiesburg, Mississippi, but raised in the small country town of Collins. Her childhood was far from easy. She says, "Unfortunately, my biological father was an abusive man and was out of my life very early at the age of two. My mother had her own adulthood and childhood issues in which she was unable to care for my sister and me so my grandmother stepped in when I was three and raised us. It took me until 2007 at the release of my first album to realise it was purposed for my grandmother to raise us because she laid the necessary foundation by always having us in church. From Sunday school, Vacation Bible School, revivals, choir days, church anniversaries, you name it we were there. It was definitely a positive in my life as I grew to love gospel music and began singing in children's choir and I haven't stopped yet."

Alkendria was baptized at the age of 10 but she didn't get a "true grasp" of the Christian faith until her early 20s. She recounts, "I remember my pastor at the time asked 'If you don't wake up in the morning where will you go?' At that time I was really uncertain. I was a good person who read the Bible and sang in the choir. But I couldn't answer that question. So at that time I gave my life to Christ and it was evident that just being a good person was not going to be enough but developing and maintaining a personal relationship with my Lord and Saviour Jesus Christ was the key to my salvation." 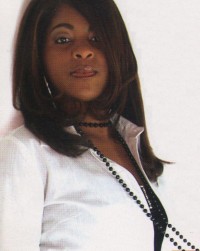 Alkendria moved into recording through her ongoing association with the SGR Music Group. The singer explains, "My first full-length song was 'Good Girl Gone Bad' off the SGR release 'Prohibition'. I was blessed to also sing hooks on other projects by SGR along with one that was nationally distributed through EMI, 'Princess Cut' by Tragedy. The idea behind my debut album 'Thank You' was contemporary praise with some funk behind it. We used a wonderful producer and friend, Stikk of New Soul Productions. D Smith also brought in producers he respected in the Kingdom to round out production duties. Later after the release of the album, DJ 4Real from the UK did a remix of the track 'Thank You' which was featured on Fusion Basslines compilation mix tape."

Alkendria has played quite a few live shows, recently opening for Kurt Carr and James Fortune. She is also preparing for a new album 'Liberation' to be released later this year. A single from it, "I Am With You", is currently being circulated to gospel radio. Says the singer, "The song is an inspirational ballad to let listeners know that as we go through these troublesome times that God is with us. We just have to open up our hearts and ears to be able to receive the instructions to fulfil the plans he's already ordained for our lives."

One of the most important lessons Alkendria has learned over the last couple of years is about seasons. She observes, "There comes a time when you have to realise the season has come to let go of people or things no matter how much the heartache and have confidence that God knows what he is doing. However, if we continue to believe, God always has a way of showing why people could only be in our lives for a certain season."

I love to see a Mississippi girl do good. I hope she has a great career, she is attractive and looks like a nice person. She probably got that way because her grandma raised her in that Mississippi way, and it will carry her a long way in life.........

Hello Mr. Cummings, I thought this was a succinct and very insightful article into the journey of Alkendria's music and life. I personally wanted to Thank You for introducing her to your audience. -D. Smith/SGR Music Group