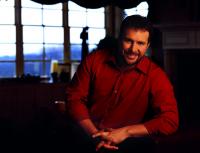 Mike: Give us a bit of biographic info.

Allen: I was born and raised in a small town, Carlsbad in New Mexico. It's known for desert, rattle snakes and Billy The Kid came out of there. But that's about all people know! I was raised in a Christian home and cut my teeth on the church pew, growing up. Every time the doors would open up, my family went through. I am very thankful for that. I was very active in the church. Everybody would sing and play instruments in my family. Everybody knows music in my family, so music has always been a part of it. We were very musically inclined within the church as well.

Mike: Are you rooted in a church where you're a worship leader there every Sunday?"

Allen: I'm actually gone a lot of Sundays because I sing in so many different churches all over. But every chance I get when I come home, I go to my own church. I'm not as active in the church as I would like to be but I think it's often a time of receiving because there's so much giving that I do on the road. I'm giving so much that when I go home, it's my time to just sit back and really receive from Christ. Get filled up and prepared for the next outing.

Mike: What do you say when people ask you what you do?

Allen: Well I just tell them I'm a Christian music recording artist. I like to consider myself a modern-day Psalmist I guess you could say it's about the act of leading worship and being a Psalmist. I think they're one and the same. To me, it's all worship as long as it's unto the Lord and it's intimacy within your heart. I mean, I consider myself worshipping God right now talking to you, giving him glory. It's a form of worship."

Mike: The big song from your career is "Somebody's Praying Me Through". Were you surprised with its impact?

Allen: I guess you could say I'm not surprised because it is a great song and I knew that it had a lot of potential. But the places that it went was surprising to me. The fact that it was the Presidential Prayer Team theme song, the National Day Of Prayer theme song. It was a true help and ministry for our military during this time in Iraq. It's been a message of hope for their families knowing that there are people out there praying for them.