Alternative Worship: A heart for youth at alternative worship events

Karl Allison goes to Oxford and Manchester to check out two or more alternative worship events.

Joy is generally regarded as one of the more influential alternative services. It has been featured at most alternative discussions I've been to and Pete Ward (one of the service's pioneers) wrote extensively about its origins in his book Worship And Youth Culture. So it was good to finally see it for myself.

The group have just one hour to set up, following on as they do from St Clements regular evening service. They quickly transform the bright, modern interior by hanging a large sheet across the front of the sanctuary. This is the only part of the church that will be used: the space at the front of the church between the pulpit and the altar. Another large sheet is hung above the altar and both are later used for OHP and slide projection.

While all this is going on, I'm informed that tonight's service is going to be different from usual. It's usually pretty loud and uptempo, but tonight we're following the agenda of the young planning group and facing some of the doubt and confusion that exists within the group. At 9pm most lights are turned off and about 30 of us sit on the sanctuary floor. The screens say "All doubters believe something" and "Doubt is the element that faith walks on." Over some ambient house, negative thoughts are shouted, climaxing in the cry "Where are you Lord?"

We are all invited to write down some of our doubts and fears and then place them in the offertory plate. Then the confessional prayer appears on the screen and we've entered a lengthy communion liturgy led by the assistant minister of the church.

The whole experience was fascinating. It revealed a group using modern ways of organising worship to confront age-old problems. It was encouraging to see young people being given power in the planning, but I was left wondering whether any church experience can really be provided for the existing congregation only, or whether we always need to be considering others who may come along. It's clearly a dilemma that can affect the brand new church groups just as much as the old ones. 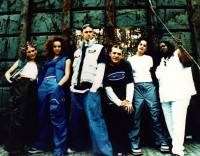 The last time I met the World Wide Message Tribe they told me of their vision to see the emergence of services throughout the Manchester area that could cater for the hundreds of teenagers being saved through their schools work. These have arrived and they are thriving.

The aim of the services is both simple and brilliant. The Tribe themselves describe the services as, "Radical buzzin' worship events that give young people, especially those with no church background, an opportunity to worship God with music and in a language that is relevant to them. An event where they can bring their mates that will have credibility." At the same time, it is recognised that these services need to retain many traditional features of church life, thus providing an introduction to the church that will eventually enable the young converts to join whatever fellowship God draws them to.

Compared to other alternative services of a similar size, the technical set up is kept deliberately simple. This is partly due to the Tribe's desire to be able to train others to run the services themselves. Robert Ruston, the administrator of Message To Schools, described it to me as being "deliberately non-mega, flexible enough for other churches to pick up and run with."

One service at St Mary's Cheadle will serve as our illustration. Still in its early stages, Tribe members were much in evidence. The church was packed to the doors with up to 500 young people. It appeared to be a good mix of church youth groups and new converts from the schools. Following some video footage of the Tribe and DC Talk, the service kicks into worship with tracks from the new 'Jumping In The House Of God' album, with Sani and Andy Hawthorne leading cranked up versions of "Come On And Celebrate" and "All Heaven Declares". Then the video screen introduces the prayer time, which is concerned with South Africa. Then there's a performance song from Sani, the Bible reading on the screen and then a 10-minute sermon from the church's youth worker. The young people's attention is clearly maintained throughout and the service ends with more Tribe music blaring from the PA.

The young people loved it. Everyone loved it. The fruit of this ministry is quite phenomenal. Support them in whatever way you can and get along to a Planet Life Service for yourself if you possibly can.

The opinions expressed in this article are not necessarily those held by Cross Rhythms. Any expressed views were accurate at the time of publishing but may or may not reflect the views of the individuals concerned at a later date.
About Karl Allison
Karl Allison runs the Last Daze sanctified dance praise events and fronts the band The Big Picture