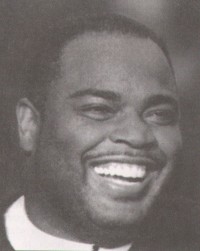 Alvin Slaughter. Who?, I hear you ask. No, he's not a teeth-baring heavy metal singer, but the best worship leader to come out of the States since, well, since Ron Kenoly. In fact, mention Alvin Slaughter and the initiated seem to refer to Ron Kenoly almost immediately.

Listening to his latest live album, 'God Can',, it's easy to make the comparisons. But how did Alvin feel about being mentioned in the same breath as Big Ron? "Ron is my buddy! I guess what makes us similar is firstly, we're on the same label and secondly we sing at a lot of churches -white and black, Baptist, Pentecostal, Charismatic, Evangelical. I think that's where our similarities are and also in our style of worship. I'm honoured to be mentioned in the same breath as Ron Kenoly. He's a great man, a great minister and a great worship leader."

Not only does Alvin sound like Ron, but he has Ron's band on the album. What was it like to play with these guys? "It was a singer's dream!" enthused Alvin. "We had five different choirs from New York and Abraham Laboriel. He's the kind of guy who, even if he couldn't play the bass, you'd want to have around. He has a love for God that's so child-like and so precious. Then there's Carl Albrecht who's played on the Hosanna recordings. Tom Brooks, the producer extraordinaire, really knows how to capture the heart of a music minister. It was a great night and God's presence was really awesome."

Clearly, Alvin is a passionate worshipper like Ron, but modestly points out, "Ron's voice is a lot smoother than mine. He's a real singer; I'm just a screamer for Jesus! Anyway, I don't consider myself a worship leader; I consider myself a music minister with worship a very large part of what I do."

But, like the Bible says, worship is all about making a joyful noise to God, and Alvin does just that. He firmly believes in the power of worship and sees it as a life-changing experience. "An amazing thing happens when we worship God - it's contagious," explained Alvin. "That's why worship is not just to be watched; it's to be experienced and sought after. Worship is not a spectator sport, but is something we can all enter into. Two things happen. Firstly, it changes us and secondly, it changes others."

I wondered whether 'God Can' is actually a gospel album, given that five different gospel choirs are used. Alvin was happy to set the record straight. "I wouldn't necessarily call it black gospel. I try to find songs that have a bit more melody because sometimes black gospel can be a little too hard. But I think my voice will give it the gospel flavour. If I can, I find a song that has a more middle of the road or inspirational feel. Sometimes it'll be a little more jazzy, have more drum riffs and more spice than a traditional praise and worship album.

I remembered that Ron Kenoly goes for this kind of thing too. So who can shed some light on the Kenoly/Slaughter debate? None other than Abraham Laboriel himself, who has worked closely with both men. "They're different because of he exuberance of Slaughter," said Abraham. "Ron Kenoly is professionally and academically trained as a singer - he has a degree in voice and knows how to use it. Alvin Slaughter was trained in New York singing with gospel choirs, so he's trained to just let his raw emotions reach out to heaven to create a place in which the presence of the Lord can dwell. The similarities are that they're both using the same language, but their backgrounds are different."

Alvin has come a long way since his early years. Growing up in the rough ghettos of New York, he believes God was with him as a youngster. He recalled his childhood: "A lot of kids I grew up with were involved with drugs and fighting, but the Lord kept me. I didn't realise how tough it really was because it was all that I knew."

Then the tough times set in. Early adult life was turbulent and rebellious. Alvin's childhood sweetheart bore his children out of wedlock and he drifted into marriage -even though he wasn't in love with his wife. "It ended up being a terrible marriage," Alvin confessed. "I was going from job to job, I was irresponsible and I was really mad at God because I'd never done all of the things that other people had done. My hopes and dreams had not been realised or fulfilled. I thought that God loved me, but I didn't think he liked me. I didn't like him a whole lot either! My wife Gloria and I went through years of being apart, of me going from job to job. There was constant fighting and by the time I was 23 we had three children; I wasn't ready for responsibility. I left my wife and my babies and for a year and a half I lived almost like a vagabond. My wife was praying that I'd come back home. Then she prayed that unless I changed my life, she didn't want me back home!"

Things got worse and soon Alvin hit rock bottom. His relationship with God was nonexistent and he became very bitter and angry. But things began to happen when his sister invited him to church. Alvin remembered it well. "I told her I hated church, but I was so lonely and had no money. I walked into the church and sat in the balcony and people started singing and worshipping the Lord. There was a wonderful atmosphere that I'd never experienced before. There was a love and a passion there. I didn't want to be a part of this emotional stuff so I walked out, but I could not get what I'd heard out of my mind."

It took a year but God eventually sorted him out with the help of people in the church. Even more remarkably, God worked a miracle in his marriage. "Gloria and I eventually got back together," Alvin said with a trembling voice. "I didn't even love her then, but I was being obedient to God and treating her as though I loved her. About six months later, I started feeling a love for her that I hadn't felt in years. Jesus really is a friend of the wounded heart. He gave us a brand new life. Now we've spent the last few years pursuing our ministry."

It's a ministry that has made an impact on the worship scene in the States in a relatively short time. I've been touched by Alvin's passion for Jesus, not to mention his overwhelming voice! Abraham Laboriel put it in a nutshell: "Alvin went through a period in his life where he lost everything. He watched the Lord restore his marriage and provide for him. When you come out of such darkness and into the marvellous light you sing all the way!"

Life really has been hard for Alvin Slaughter, but God has been good to him. What hope can he give to others who are facing difficult times? "There are a lot of Christians who are going through life without any of the peace and assurance God has promised them. It's one thing to go to church, but it's another thing to go home and know that even in the midst of our worst circumstance, God is with us. He says his ways are not like our ways and his thoughts are not like our thoughts. So even when we face the most difficult situation, God can bring us through it with victory."

Alvin stressed that his new album will especially touch you if you're finding life to be one long painful battle. More than that, he believes it will encourage you to know and trust God in your hardship: "One of the reasons why I did the album 'God Can' is because there are a lot of Christians who have forgotten that in the midst of their struggles, God can keep them and he is able to do beyond all that we ask of him."

The opinions expressed in this article are not necessarily those held by Cross Rhythms. Any expressed views were accurate at the time of publishing but may or may not reflect the views of the individuals concerned at a later date.
About Pippa Rimmer
Pippa Rimmer is a regular contributor to Cross Rhythms and with her husband Mike presents a weekly magazine programme on UCB Cross Rhythms.

I have always been deeply touched with the Holy Spirit by Alvin's music..I did not know he faced such a painful life. I sang quite often in yrs. past, and am trying to regain it again. I am inspired by what I read. Was looking up a song where I thought he had spoken about losing his son. You see, I lost my 25 yr. old son Jason Daniel, April 25, 2013. Life became so challenging. Still is at times, I miss him. Now my only son, Joshua, is a preacher. So anointed with the Word, music and power of God. But he needs understanding and an opportunity to go forward. I had hoped, if somehow, to speak with Mr. Slaughter, my music inspiration. He sings from his heart . The Lord continue your minstry....