American Gospel: Mark Henry, The Lovers Of Christ and The Mighty Revelations playing together in London

American gospel acts MARK HENRY, THE LOVERS OF CHRIST and THE MIGHTY REVELATORS made a surprise visit to London in May. George Luke was there. 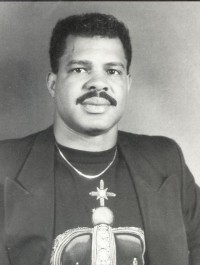 Around the same time that the 'Gospel Explosion' show of top American gospel stars at Wembley was announcing its second postponement, a hurriedly arranged 'Gospel Revue' featuring a crowd of American and British gospel artists was taking place in London's Kensington Temple on May Bank Holiday. A million miles from the big budget razzmatazz, this was grassroots ministry and parts of it were truly superb. It was organised by Dave Beard, the non-playing member of London rappers N-Daze who has recently planted a church in London. As well as N-Daze there was a bevy of up and coming UK artists - Set Free, Anointed, The Warrior and June. But it was the Americans who intrigued most. What was it that would motivate four "unknown" American gospel artists to pay their own airfares and fly to London to play at a one-off gig? For the sake of the gospel that's what. I didn't manage to speak to the West Angeles COGIC Worship team but managed to snatch conversations with the three other acts during the six-hour marathon show. Here are their stories:-

37-year-old Mark started singing at the age of five and formed his first group (made up of his brothers and sisters) at 10. The group soon built up a following in their hometown of New Iberia, Louisiana, performing at public functions and later on doing support slots for major bands visiting the town. At the urging of friends, the group moved to California and recorded a demo which eventually won them a recording deal with the Total Experience record label. Their most famous label mates, the Gap Band, were roped in to produce their debut album. Unfortunately, some legal problems ensured and the album never saw the light of day. The group disbanded soon after. Looking back Mark says, "I see that it was the hand of God, actually. He didn't want us to venture into that kind of music and lifestyle because I would never have come to know God personally."

About five years ago Mark's career took a turn after a meeting with Andrae Crouch. "I ran into Andrae and he was impressed with my singing," Mark recalls. "I was impressed with his attitude towards what he did in singing gospel and that influenced me." Mark, who had been raised Catholic, started to read the Bible and subsequently made a commitment to Christ. At the same time he also made a commitment to only sing contemporary gospel songs.

But God had other plans - or so it seemed. "When I made the commitment, God gave me a Luther Vandross song to sing and I questioned him, asking 'Why? I thought I was going into the Christian arena.' He said, 'Just be still and know that I am God.' He sent me back to the nightclubs that I used to perform in when I was in a secular group. I've performed in the inner cities, at beaches and on the streets in LA - anywhere God sends me."

Last year, the GMA chose Mark as one of the finalists in the Contemporary Black Gospel category in their 'Song For '94' songwriter's competition. And Mark, who sometimes co-writes songs with his brother, has set up his own label, called Rapture Records. The first Rapture release is Mark's debut album, 'It's Gonna Be Alright'. Mark's aims for the future include taking his music into the mainstream, either by him being signed to a major label, or by securing a distribution deal for Rapture. "I'm just hoping to expand my ministry," Mark says.

The Lovers Of Christ
LA residents Fitz Houston and Ivan Cole make up the duo the LOVERS OF CHRIST, bringing to the jazz scene their concept of 'jazz-gospel'.

The pair are both members of the praise and worship team at the West Angeles Church Of God In Christ, and according to Fitz they formed the group at the beginning of the year, mainly because the musical programme in the church didn't utilise horns quite as much as they would have liked it to. Ivan, the saxophonist, is a veteran of America's black gospel circuit, having spent 10 years touring with the Clark Sisters, Shirley Ceasar and the late James Cleveland. Fitz, who plays trumpet and occasionally sings, is also an actor and screenwriter.

So far, the duo have been playing in churches and at rallies across the USA, where the response has been quite encouraging, in particular to one of their compositions entitled "Ascension". When the opportunity arose for them to visit London they both jumped at the chance. "We're really happy about this trip," enthused Fitz. "We're in the process now of recording our first album. About seven of the tunes are done and we're sorting out the finalisation of a deal with our producer as we speak. This London trip has helped move things a bit faster in that whole area."

The Lovers' concept of jazz-gospel basically consists of jazz instrumentals with spoken Bible scriptures which, they say, "lets people know that we're Christians." According to Ivan, it's their way of showing "that gospel music can be done by musicians, not just singers." "If you've never heard jazz with verses, keep an open mind," says Fitz. "We always tell people that we truly believe that music is spiritual, and what takes it earthbound is when men give earthbound titles to it. That takes it from being a spiritual song to a secular one. All our songs have titles like 'Reaching For Jesus', 'Ascension' and 'Walk By Faith'.

The Mighty Revelators
Some wise soul once complained that "nostalgia ain't what it used to be." Well, straight out of Compton (with apologies to NWA) comes a group that could change all that. A gospel quartet that delivers good old gospel the way only the old masters could -full of raw energy, bringing that church atmosphere wherever it's heard. And the name of the group? THE LITTLE STICK OF DYNAMITE AND THE MIGHTY REVELATORS.

The Reverend Israel Holmes (aka Little Stick) and the group's spokesman Leon 'Pee Wee' Anderson took some time after playing a gruelling set to an immensely inspired audience to tell me about the group's history. Pee Wee had originally formed the group way back in 1964 and Rev Holmes joined in 1967. They performed on the gospel circuit for 10 years before the group disbanded. "We broke the group up for various reasons and went our separate ways," Pee Wee explained. "In 1991, about 15 years later, we started the group back up again. I got the itch for the group again and said I was going to find the other guys. We started with all the original Revelators and they all walked out one by one, so we started looking for other members."

The current line up now consists of Rev Holmes, Pee Wee, his pastor the Rev A G Lee and Willie Kelly. In addition, they have a five piece band consisting of Pee Wee's son Deon on guitar, Reggie Dixon on drums, Frank Dearborn on bass and Melvin Hunter and Greg Cauthier on keyboards. In the last year they have worked with, amongst others, the Mighty Clouds Of Joy, Shirley Caesar and the Williams Brothers and made several television appearances. They also recently recorded an album - the aptly titled 'Explosion'.

After they split up Rev Holmes started pastoring a church. "I just went into another world for a while," said Pee Wee. "I wasn't satisfied with what I was doing. I went back into gospel with another group called the LA Travellers. I sang with them for a while but we broke up too! But with my love for gospel singing I thought I just had to get back into it. That's when I decided to get the Revelators back together."

I asked how Rev Holmes came to be known as the Little Stick Of Dynamite. "I guess it's because I'm the little man with the big voice," he laughed. "I've got a big heart and probably a big mouth as well!" The last word came from Pee Wee, who summed up the group's aims in one short sentence: "We get the work done."

George Luke is music editor for the black arts magazine Artrage and lives in London.