Andra Day: Giving the Amen to the new Genesis G80 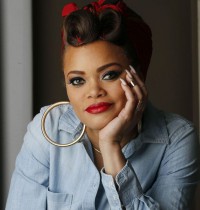 Watch TV, particularly in America, and you'll catch ads for the car Genesis G80 and be struck by a great song sung by a great voice. The song is "Amen" and the singer is Cassandra Monique Batie, now known throughout the music world as Andra Day. Her debut album 'Cheers To The Fall' (2015) produced one of the most played songs in recent years on Cross Rhythms radio, "Rise Up", and only last Christmas her duet with Stevie Wonder on "Someday At Christmas" brought some soul into the yuletide celebrations.

Andra's current car commercial success carries a powerful lyric: "I'll say amen to all the crazy things that happened that made me who I am." Said Andra, "I decided to sing the song because 'Amen' means 'It is done', and that for me means so much. To me, it lays to rest things in the past, things that have hurt, and things I can't control. It reminds me that I'm not defined by those things, and though I can't control them, that doesn't mean they control me. It also gives me faith for my present and future, to go for the bigger dream, to take the harder road - the one that scares me - and to endure through trials, because nothing can take away my purpose. My greatness is already written. Everyone's greatness is, and I hope this song helps them see that."

Day was born on 30th December 1984 in Spokane, Washington. She moved to Southern California at age three and grew up in and around San Diego with her family. She began singing at a young age at the First United Methodist Church in Chula Vista, California. Day also began taking dance lessons at age five (a discipline she continued into her 20s). She attended Valencia Park Elementary School which she credits with fostering her interest in performing arts. At age 12, Day was introduced to the sounds of prominent jazz vocalists like Billie Holiday, Ella Fitzgerald and Dinah Washington, all of whom she counts as early influences on her sound. Day attended the San Diego School of Creative and Performing Arts where she graduated in 2003.

Success didn't come quickly and she worked 20 different jobs over the next few years, including one as a children's entertainer. In 2010, Stevie Wonder's then wife, Kai Millard, noticed Day performing at a strip mall and brought her to the attention of her husband. Day received a call from Wonder himself soon after. No immediate partnership was formed, but the two reconnected around a year later. Wonder introduced Day to producer Adrian Gurvitz at that time. Gurvitz would eventually collaborate on Day's debut album a few years later.

Day earned a record deal with Warner Bros Records in part because of the popularity of her numerous unplugged covers and mashups on her YouTube channel, most of which were filmed in her sister's bedroom in San Diego.

Her 'Cheers To The Fall' album was released in August 2015. US TV's Katie Presley enthused about Day's voice, suggesting it had "Eartha Kitt's unflappable confidence, Amy Winehouse's effortless grasp of classic jazz, Billie Holiday's access to raw emotion and Adele's range and pop sensibility." Andra's life-affirming ballad "Rise Up" made it to number 13 on the US R&B chart and 26 on the pop chart and was nominated for Best R&B Performance at the 58th Grammy Awards in 2016. The 'Cheers To The Fall' album climbed to 48 on the Billboard 200 list.