One of the pioneers of contemporary Christian music ANDRAE CROUCH recently was honoured in Hollywood for his showbiz contribution. He spoke to George Luke. 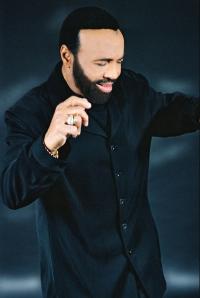 In the 30-odd years that Andrae Crouch has been singing, he's truly become a gospel music legend. He has received multiple Grammy Awards, his songs such as "Soon And Very Soon", "Jesus Is The Answer" and "My Tribute (To God Be The Glory)" are known around the world and he has performed with everyone from Michael Jackson to Madonna. He even got an Oscar nomination for his work on the soundtrack of The Lion King. However, the singer/songwriter will have major problems if he tries to fit his latest award on his mantelpiece; Andrae has recently become the 2,256th person (and only the third gospel singer) to have a star on the Hollywood Boulevard Walk Of Fame. I spoke to him on the phone the week before the star was unveiled:

Goerge: First of all, congratulations on getting the star.

Andrae: Thanks. It feels really good, but funny at the same time. You know, when you think about having a star on the ground, it kind of feels tombstone-ish (laughs). Other than that, I think I'll be all right.

George: Earlier in the year, we all saw the huge success of The Passion Of The Christ, and now you've been honoured in this way. Are these both signs that Hollywood's embracing God more?

Andrae: Not really. When this particular honour was bestowed upon me, there was a Jewish brother whom we'd led to the Lord; a member of our church. He'd gone down to Hollywood for something and he came back to church and said, 'You know, you should have a star. As I learn about your music and how it's blessed people, I think people should know that and you should be recognised.' I laughed, thinking there was no way that would ever happen. Then he wrote the Hollywood Chamber Of Commerce, who okays these things, and they wrote him back. He came and showed me the letter and said, 'Andrae, you were approved for a star two years ago! They wrote your manager, but the letter was returned!' He showed me the letter they had originally written to my manager - which he'd never received, because he had moved his office to the East Coast. So I don't look at it as piggybacking on the movie, or anything like that, because it was already in the mix.

The thing that gives it an even deeper significance is the fact that Hollywood hasn't recognised too many people for ministry or church-related work. So I think that the people who know me are as happy as I am. People know that I'm a worshipper. I'm not tripping over to say 'look what I did.' I know that the people who've prayed for me and supported me and enjoyed my music do so because it's taken them to see Christ, not Andrae. They know my intentions for doing music, so they feel as much a part of it as I do. It's not a pat on the back for Andrae Crouch, but a glory to God for all he's done and all he's going to do. For Hollywood to recognise the work that a Christian is doing is of high significance, as far as I'm concerned.

George: For the past 10 years or so, you've been juggling being a performing artist with your duties as a church pastor. How do you do it? And where do you think other "star pastors" go wrong when they try to do several things at once?

Andrae: I think a lot of times, when God calls people to do certain things, the downside of being able to do a lot of things is that people don't ask God what the number one thing is he wants them to do, and their priorities get mixed up. But I really want people to see what it means to be consistent in what God has called you to do, because a lot of times, in churches, so many people have a vision that God wants them to do this or that, and many times they don't make themselves subjected to be led by God. A lot of people want to be fed, but they don't want to be led. And if God gives them an idea, they think it's supposed to happen now. And so their timing goes off and a lot of things they're supposed to do are done prematurely. When things don't happen for them right away, they get discouraged and we lose them. So it's important for a pastor who knows the way God usually moves, and he really loves it when he has people who are consistent. With many things that have been spoken to us prophetically, it doesn't mean it's gonna happen right away; it means that God wants to do that particular thing, but they have to learn to be faithful.

We put on probably about 100,000 miles a year - which we don't consider travelling at all! Since I'm pastoring now, I try not to miss two Sundays in a row. There'll be three or four times a year, where I'll leave on Saturday night and be gone on Sunday, then be gone the following Sunday. But other than that, I'm home. 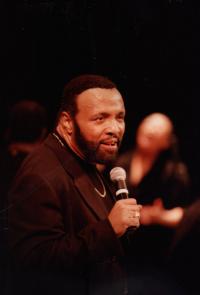 I believe God is causing a lot of psalmists to be pastors, to bring emphasis on worship, because worship has a way of bringing people together when they take the focus off themselves and put it strictly on the Lord. When we get to that place where God can move in our midst in a mighty way, he can heal our situation.

George: Who are your favourites out of the current batch of new gospel artists?

Andrae: I don't have any favourites; I like them all. When I find out what their testimony is, and their music is good and they love God, I can't help but love them. Their musical style and mine may be as different as night and day, but I just love sincerity and I love it when people are real and have a real joy in doing what they're doing - regardless of whether they're getting paid for it or not. I'm so sick of seeing musicians who won't even play at a funeral unless they were paid (laughs). That spirit needs to be rebuked in our musicians today. They're so needed, and it's a beautiful thing when they learn the heart of God. God loves worship so much; that's why Satan's always trying to get into the music department.

Once we were having a wonderful worship service and there was this guitarist we were trying out. He just wanted everybody to notice him. The Holy Spirit was moving in a mighty way and all of a sudden this guy started doodling on his guitar. It just pulled people right out of the throne room. I said to him, 'Y'know brother, I love your skill and you can really play - but you know what? When we were worshipping, God was trying to take us to the third heaven and what you played brought us to the parking lot.' You've got to be sensitive to what God is doing - but a lot of that has to be taught. So I wasn't too hard on him; I said, 'If you hang around, we'll teach you how to hear what God is saying and where he wants to take the congregation.' That is so important - not somebody's skill, but to move in the Spirit.

Andrae: Yes - ain't that something? In Romans, it talks about us being slaves to Jesus Christ. So I said, 'You know what? I don't want to call my record label Agape, Maranatha, PTL, or one of those religious names.' I said I wanted to call it Slave. And being black puts another exclamation mark behind it. People always repeat it. They say, 'The name of your record label is Slave?' I go, 'Yeah,' and they say 'Why?' And I say, 'Because you asked!' If it was called anything else, they wouldn't repeat it - but the fact that they repeated it lets me know that it's got their attention. It refers to us wilfully being slaves of Jesus Christ. I serve him and will take orders from him because I want to be a slave to Jesus Christ.

George: What are your plans for the future?

Andrae: In time we're going to sign other artists to the label so that it supports itself. Also, our church is putting together a company called Umbrella. It'll be a performing arts type organisation, bringing under one umbrella all those who can act, dance, sing, write, engineers, producers, etc. When the Bible talks about fellowship, I believe that it's more than just having a biscuit and tea. I believe that it's when we get together and pray and talk about each other's visions. Real fellowship is networking: how can I help you get to where God has called you to be? Maybe there's something you do can help me to get to where God wants me to be. I think God plans things like that. I want to send an SOS out to songwriters and the little Andrae Crouches that God has out there who are writing songs, and they may be really young, but God has his hand upon them. I want to find them; there are so many people out there singing who may not get the chance to be heard if someone doesn't let them piggyback off them.

I think that God has called me, and the ones who are working with me, for us to do that for people, because we won't always be here. God wants us to teach people what we do and to give them what we have, and if they learn that and blend it with what they have, they can go even further. This is what I want to do.