Andrae Crouch: The history of the US gospel legend

One of the most influential and controversial of all Christian music luminaries, ANDRAE CROUCH visits these shores in October. Tony Cummings fills in the history. 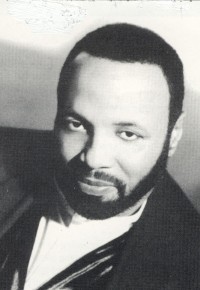 For movie buffs he's the man whose musical arrangements will soon be heard on the latest Disney cartoon blockbuster The Lion King'. For pop pundits he's the man behind the Andrae Crouch Singers who've backed Michael Jackson, Madonna and Diana Ross. For those inclined neither to forgive nor forget he's the gospel singer who was once caught up in a high profile drugs scandal. But for Christians old enough to remember, Andrae Crouch is the one man above all others who put the 'contemporary' in Christian music.

In the 70s pioneering albums by Andrae Crouch And The Disciples built bridges between black and white church music while making the funky rhythms of contemporary pop to a new generation of churchgoers. But then in 1984 after a shoal of Dove and Grammy Awards, Andrae turned his back on the world of Christian music. Moving into the LA pop, R&B and movie slipstream the singer/composer/arranger proceeded to make a good living with record projects such as Michael Jackson's 'Bad' album and the Colour Purple movie soundtrack. Then, this year, Qwest Records announced one of the most eagerly anticipated gospel comebacks ever. Andrae's first Christian album for a decade 'Mercy' now rests in both America's CCM and black gospel charts. To capitalise on this Andrae, having recently completed a successful American tour, in October brings his entourage to Britain for shows in Birmingham and London.

Back in the 70s many considered Andrae Crouch to be, in the words of CCM magazine, "an opinionated musical genius with a flair for attracting controversy." But as is clearly reflected in his 'Mercy' album, Andrae is a man who has spent time in the crucible of suffering and been changed and softened in the process. Nothing has brought about this emotional adjustment more than the deaths of Andrae's beloved parents and the subsequent leadership vacuum he and his siblings have filled in the church his parents pastored for 40 years. The new album is a result of these trials and reflects God's mercy to him.

"It's where I've been - experience," Andrae explains. "I remember a lot of fear losing my mother, my father... It was time to grow up. The Lord allows us to go through things because we depend on our mother and father to take responsibility for us. You can leave a dish on the sink thinking mama's gonna wash it, but those dishes sure pile up when she's not there anymore."

Crouch didn't immediately arrive at this philosophical conclusion, though. After his mother died of cancer, he admits that "for many months I was bitter. I was wondering why God didn't heal her. Why did he take her? I knew it wasn't right for me to feel that way, but I said, 'What happened to my prayers that he would heal anything if I asked it in his name?' What happened to that?"
A year and a half later, when Crouch's father also died of cancer, he was better equipped to deal with the loss. "I had matured by then. I didn't ask those questions anymore. God had taught me in between that time that it was his will. His mercy endureth forever and the miracle sometimes isn't that he brought healing, the miracle is where God takes us, how he's made us aware of the equipment he gives us, the armour he gives us to fight with."

Crouch, his twin sister Sandra and their older brother Benjamin now run the Christ Memorial Church their parents founded. The biggest adaptation for Crouch was easing into pastoral care. "I used to wonder how my father could get up, go to the hospital and see somebody early in the morning. But, since he's been gone, when we hear about something happening, I'll tell Sandra, 'Let's go see such and such.' Before, I wouldn't feel like picking up no phone at three in the morning to talk to nobody. But he's given me a heart for it. Now, it's 'Hello, God bless you and what's going on?'"

Although he's not the pastor, Crouch has also begun to preach at the church. "Standing there in the pulpit as opposed to sitting at the piano is different," smiles Andrae. "The fear was at first that if I get in a bind, I know I can just sit down and play a song. But when you're over there a few feet away and you're talking, you better be saying something! So, it gave me a real love for the Word."

It's somewhat ironic to hear Andrae Crouch talk about developing a love for the Word. When he founded his first group, The Disciples, in 1965, their songs were basically lifted from the Scriptures. In fact, he feels the reason his songs have lasted is because "they all revolve around the story of the Bible [and] biblical teaching. It's not Andrae Crouch because Andrae Crouch will die, but the Word will never return void."

The Andrae Crouch legacy can be heard in churches around the world every Sunday morning when the choir belts out standards such as "I Surrender All", "My Tribute: To God Be The Glory", "Through It All", "The Blood Will Never Lose Its Power" or "Bless The Lord Oh My Soul". He wrote them all.

For son-of-a-preacherman Andrae, 'playing church' was a childhood equivalent of playing cowboys and Indians. By the age of eight brother and sister were amusing themselves with a pie tin for a tambourine and a commode for a platform. The games came to an abrupt end when one particularly exuberant 'service' ended with the commode breaking!

At nine Andrae was converted through the preaching of his father. He remembers, "I sat there in the audience listening. When he gave the invitation I went forward. I just felt so close to the Lord. I cried and cried. When everybody started singing, I was so happy jumping around that I split my new shoes!"

A few months later Benjamin Crouch was hesitating over accepting an invitation to pastor a church - which had no one willing or able to play the piano for the services. Andrae recalls, "One day in the service dad called me up front, laid hands on me and prayed, 'Lord, I don't know what you want me to do, but if you want me to be pastor full time really give Andrae the gift of music' He asked me, 'Andrae, if the Lord gives you the gift of music, will you use it?'" The nine year old eagerly assented. Two weeks later the father sat the youngster at the piano bench and Andrae started playing. "Dad kept his promise and took the pastorate. I played for all the services and later started a choir. At district meetings and youth rallies, I'd play the piano when I could."

With brother Benjamin Jerome Jr and sister Sandra, Andrae formed a homespun singing group who performed in local churches. Then in the mid 60s Andrae, who'd done well at school and was a teacher for over a year, felt God calling him into full time ministry.

He joined the LA branch of Dave 'Cross And The Switchblade' Wilkerson's Teen Challenge and worked with the rehabilitation centre for drug addicts. During that time at Teen Challenge he began songwriting.

Great to hear the whole story about Minister/Pastor Andre Crouche. A true blessing ...

Im 28 yrs of age and im a Worship Leader in Church called A.O.G. I dont knw who Andrae Crouch is... since is learnt his songs Then i started surfing on Net for the original Of Jesus is The Answer...and i dntknw its him who wrote I DONT KNW WHY JESUS LOVES ME... BLOOD and i love his musics even downloaded them 2

Thanks so much for this article about Andrae Crouch. I have listened to his music since the 60's, and God has used Andrae's music and testimony to draw me into a closer love relationship, with Jesus Christ, the Son of the Living God! "To God Be The Glory," and "Through It All," are 2 of my favorites, that have deeply impacted my life! Prayers are with you brother Andrae! Your sister in the Lord, Linda Palmer

I have loved Andrae's music for years. My #1 song is "Through It All". Down through the years when he would be on TBN, Paul Crouch would always talk about "his brother Andrea". A great testimony of how life is like a rollercoaster, but thank God for his grace & mercy.