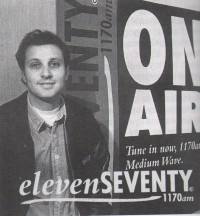 Imagine it. One day you'll be lying in bed or driving home from work and you'll turn on your local commercial radio station and there, programmed in amongst all those Take That, DJ Jazzy Jeff and Mr Blobby songs you'll suddenly hear your favourite Petra, lona or Steve Taylor tracks. What a dream, Christian music on local radio, standing up on its own merit, being a part of the world but not compromising its message. Well, what a revelation then, that for some this is no longer a dream but a broadcasting reality. Yes, if you live in South Bucks or East Berks then you can now hear, at any time of the day, some of the best contemporary Christian music that's around, and all of it has been deliberately scheduled in to those 'normal' radio programmes.

The reason? Well, it's the arrival on the scene of the Christian backed Eleven Seventy Radio Station which kicked off to a potential of 330,000 adults at 10:00am on New Year's Eve. Andrew Phillips, Programme Director and Station Manager, explained that he didn't want a high percentage of Christian music but a week's scheduling did include (deep breath) Bob Carlisle, Charlie Peacock, Amy Grant, Michael W Smith, lo Ha, Michael English, Martyn Joseph, Edin-Adahl, Chris Eaton, Petra, Kathy Troccoli, White Heart, Sandi Patti, David Mullen, Vernessa Mitchell, Keith Thomas, Sparks, BeBe And CeCe Winans, Manchester Mass Choir, Al Green, Russ Taff, Bryan Duncan, Ashley Cleveland, Chris Falson, Wayne Watson, Bill Medley, Imperials, Steve Camp, Bryn Haworth, 2 Hearts, Bruce Cockbum and Phil Driscoll! "There's a lot more but I'll implement them slowly," Andrew said. Like most radio stations, Eleven Seventy carries Christian programmes but it is keen not to overdo it, having much the same percentage as any other station. This is provided for by a contemporary music worship programme between 6:00 and 7:00 on Sunday mornings and a two hour Gospel show every Monday night presented by DJ of the year Benny King.

Andrew Phillips, although he's from Down Under!, (What do you mean? Maxine) sounds like he's got his head screwed on, and certainly he has a model background for his current position. "I'm a songwriter," he explained, "and a credentialed minister with the Assemblies Of God in Australia.
Additionally I was heavily involved in media work. I've worked in productions, radio broadcasts both with secular and Christian mixed with secular stations. And I've also done a far whack of welfare work, working with unemployed young people and social work and so on." And he's only 33!

Radio Wye, the Christian company who own Eleven Seventy, discovered Andrew in Australia. "I was working in Perth in a station with a very similar ethos to this one where it mixed Christian music and Christian elements with secular elements. They (Radio Wye) found out I was involved and that I had a British passport and kind of asked if I would be interested in coming to have a look at it. I felt that being born in England it would be nice to see what it was like over here, and from a spiritual sense I felt it was a very good thing to get involved in."

And involved he is. Not only does he run the whole station but he also presents the morning show every day between 10.00am and 2.00pm, and whilst it, like the majority of other shows, is not a 'Christian' programme, Andrew explained that there are certain qualities that all Eleven Seventy staff possess. "I think that the staff, when I hand picked them, I picked them with the qualities that they care about individuals. Some have been very disillusioned by Christianity, but the point being they still care for people. And the fact they are in touch with what's happening out there is good for us. I think there would be a 50/50 split of Christian and non-Christian, and I think that is the practical proof of what we are trying to achieve."

One of the features at Eleven Seventy is an "input line", where people can ring up and say anything they want, and this is indicative of the station's open policy.

"I think we haven't got a fear of anything. We personally are not here to guard a faith or guard a truth. We are literally willing to expose ourselves to what is happening in the world and broadcast it. For example in the news we highlighted the fact of the archbishop who announced in Scotland that the virgin birth was a myth. Personally, I believe in the virgin birth but the very fact we highlighted it means we are not frightened to admit that there's people who think this. There is a brilliant quote that I think is very applicable and that is the truth is strong enough that it can be spat at, jumped on, laughed at, ridiculed, mocked and if it is still truth it will still be there in the morning."

The success of Eleven Seventy is yet to be proved, but its heart to the community sounds solid. "I think we have a commitment to be a very real friend to the community. And I mean a very real friend. We won't run away or say we are not here to listen and I think the very fact that we ARE available is a good Christian ethic and practicality of faith. A lot of the religious world has tended to close off from the world. It says 'you can exist over there, but we have come out from among you and we are better than you.' What we are trying to say is that we actually believe we can live with you and make life better by being there. I don't think Jesus went around with magic wands. I think there were some people standing right next to him who never had their lives changed, but there were also people standing near him who DID get their lives changed because they saw that he really did care."

Perhaps it's like Andrew's mate in Perth Radio says: "God didn't call us to be keepers of the aquarium, but fishers of men!" God bless Eleven Seventy.