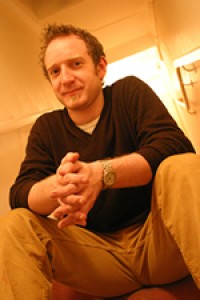 Luton-based Irishman Andy Flannagan is British Youth For Christ's national songwriter/performer/worship leader. His most recent project is the multi-media CD reflecting the youth worship at Spring Harvest. Distinctive Sounds: More Than A Song features 10 new songs by Andy, Jaimie Hill and Steven Riley. It was produced in association with YFC's Rock Solid 2 programme and features visuals and sound loops to use during worship as well as 150 creative worship ideas, song acetates and much more. When not ensconced in the studio Andy burns up the miles touring all over. He's performed at Spring Harvest, Soul Survivor and when I spoke to him had just finished ministering at Ireland's Summer Madness.

TC: You started off training to be a doctor. How on earth did you end up working for Youth For Christ?

AF: Good question! I could tell you the whole story, but we'd be here for some time. Suffice to say that I had God in my face calling me out of the medical stuff in no uncertain terms. There were a couple of those "divine coincidences" that just couldn't be argued with. Basically by the time I'd got to the fourth year of my degree I was gigging a couple of nights a week, and medicine was being squeezed into the gaps. I had to then put my head down and be exclusively committed to the medical stuff for the next two years, with our 80 hrs/wk craziness. I really loved working as a doctor, but I'm just a wee bit too passionate about communicating God to people, and he seems to be using the songs in a major kind of way. A couple of years ago someone randomly sent me a postcard that they felt was significant for me. It said, "Do not alight from a moving bus." I don't intend to.

TC: You seem to wear several different musical hats. Would you say that you are more and more concentrating now on worship ministry?

AF: Certainly in the first half of this year that has been the case, through the resourcing workshops and the Distinctive Sounds album work. It really was a labour of love. I'm not sure that that is a long-term progression though. Inevitably because there are generally more folks at worship events than at gigs in the UK, I guess more people get to hear about the worship stuff. A lot of me desires to that balance in the UK to shift slightly, as some of the most intense times of knowing God speaking in the last two years have been to folks at what I would call "ministry gigs". I'd love to see the rise again of the "minstrel" or "troubadour", where the emphasis is on communication and ministry and not so much on entertainment.

TC: What is your perception on the praise and worship market? We seem to be being flooded with worship albums.

AF: I'll let you into a secret here. I don't listen to worship albums. It's not that I don't like them, but I desperately want the stuff that I write to be original and not subconsciously just duplicating what is out there and I know will sell well. It also means that I am always looking for windows for worship on God from the everyday stuff and not purely through music and these usually form really good concepts/images for bringing young people into real, useful worship, that will resonate with them during the rest of their week, and not just on a Sunday.

TC: How did the Distinctive Sounds project come about?

AF: For a long time I had noticed a distinct gap in the music and resources for worship for younger teenagers. There was Duggie, Ishmael, Captain Alan and friends for 7-11 year olds and plenty of guitar-based stuff which both lyrically and stylistically sits really well with late teens, but what about the crew in between? They are quite literally a distinctive generation and in this post-modern world it takes some proper thinking and planning to engage these guys in worship. "I love you", "thank you" and "sorry" are three phrases that are very rare in youth culture today, and when you think about it those phrases are a big part of what worship is. So if it's very hard to get young people to express those sentiments to their peers, is it easier or harder to get them expressing those vertically?

TC: Tell me how Distinctive Sounds links in with Rock Solid 2?

AF: Time and time again, as we do Rock Solid 2 training days, youth workers are asking the question, "How can we engage 11-14 year olds in worship?" Rock Solid and RS2 have been enormously successful all over the world with this age group, so we wanted to provide something that could fill in the gap between the creative interactive way that this age group connect with RS material, and the quite "straight-up-and-down" style of worship that they are expected to step straight into. As YFC we run RS training days where I have been doing training on "worship with 11-14 year olds", encouraging youth workers to broaden their thinking about what worship is and what is possible. The Distinctive Sounds CD-ROM is really a collection of a lot of the ideas shared on those days.

TC: Would you agree that Distinctive Sounds is a project much bigger than most albums linked to Spring Harvest?

AF: Yes, certainly. It is a genuine attempt to provide folks with something that will be useful and give them the tools to release young people into worship. There are hundreds of creative worship ideas to use with small or large groups, flash clips, other visuals, a comprehensive list of useful websites, instrument tutorials and advice and examples on using drum loops and sampled materials. As we work with youth workers around the country, they complain about the difficulty of bridging the gap between the worship experience that their young people have at big events and what is possible week by week in their own locality. The CD attempts to give some ideas and tools to bridge that gap.

TC: Were you disappointed to see Oxygen break up after only one album?