The last time Cross Rhythms spoke to Christendom's best known exponent of electronic music, Andy Hunter was talking about his 'Colour' album of 2008. I recently caught up with the Leicester-born globetrotting deejay and producer and threw him a few questions.

Chris: What have you been doing in the two years since your 'Collide' EP?

Andy: Since then I've been mainly touring. I've been doing a lot at the moment all over Latin America - the doors seem to be open there to my music - as well as going back to the United States. So I've been flying all over there doing shows. Production-wise, I did another full feature film score last year with Robbie Bronniman, who I've worked with for years. That was called Renee, which I think is due out this year at some point. It's the story of a girl who self-harms. From her story a whole movement came up called To Write Love On Her Arms.

Chris: Why do you think doors have opened in South America??

Andy: They're fairly European, so dance music is very big down there. Within church circles to have a Christian artist who plays that type of music is quite unusual, but certainly appeals to a lot of the taste there. That threw open a lot of doors - especially leading music as a deejay, that's something very fresh and new for them. I get invited to a lot of churches and conferences. You go to one of those countries like Bolivia and word gets around, you get to Guatemala, you get invited to Argentina. It's just great. It's a long way to fly, but it's been a great experience.

Chris: You've worked in the mainstream as well.

Andy: I guess it's just who I am. I've always tried to do a holistic approach. I love my music, and my music is inspired by my faith, my relationship with God. As an artist you can't hide your inspiration: it's there for everyone to see. My music goes through the doors that open. I've always had a heart not to just be in the Church, but to be in the music industry, the clubbing world, and to seek God to use me in any way - from people hearing my music to conversations with people about the inspirations and what fires me up. I've had some great conversations. I love that.

Chris: Tell us about 'Glow'.

Andy: 'Glow' was kind of a goal that I set myself at the start of this year. I put out a video on my YouTube channel; I just said I'm going to write an EP. My aim was to have it out by May. Putting it out in cyberspace it gives you a goal. Basically, people can follow it: every week I was working on the EP people could follow my blog - how it was created, the themes and inspiration. 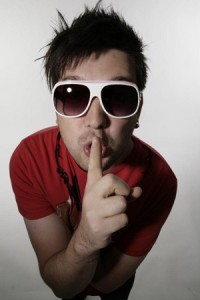 Chris: How does it compare to your previous work?

Andy: I really like this one. I think there are some really strong tracks. I worked with a couple of vocalists, which was different: 'Collide' I did completely myself, all instrumentals, a few vocal bits from me. This one I worked with Monique Thomas on the title track, and also a singer/songwriter called Beth Bullock on "Spiral" - we've got a video out on YouTube.

Andy: I've known her; she's quite local here, south Wales. I've seen her at a few gigs. She performs just with a guitar, and I love her vocal: it gives me goosebumps. I said, 'It'd be great if we could write together and have you guest on one of my tracks, because I think your vocal would lend itself well to what I do'. She was well up for it, because she'd never done the dance vibe before. We wrote the track, and I'm really pleased with the result. We're certainly going to do some future work together as well. She's mainly doing acoustic gigs around south Wales - a real talent, great songwriter, great singer.

Chris: Where did your connection with Monique come about?

Andy: In February a bunch of us went out on an ambassador tour with Compassion out to Kolkata. There were about 15 of us on the trip, and Monique was one of us. I never met her before or knew of her music. We had a long journey on the plane going out, so we'd listen to each other's music, and we got chatting. All through the week we were in Kolkata we were very much impacted by what we were seeing and the work that Compassion do, which is amazing. I had a chance to meet a child that I sponsor; it was just very moving. I thought it'd be silly not to create something out of that emotion, that experience. This track was based on Isaiah 58 about feeding the poor. There's also a blessing for us: God will make us glow and shine. It's a great theme for a song; I said, 'Why don't you come up with some lyrics, some melody?' We just did that. We spent probably a couple of hours over Skype working on the lyrics - she was coming up with the melody - then she came down to Swansea to the studio and recorded it. It was very much based on our time in Kolkata.

Chris: You're number one in the iTunes dance chart in Guatemala.

Andy: I've been loving Guatemala every time I go. Slowly things have been building, and it's now currently at number three in their regular chart - every genre. I'm really blown away with the love from Guatemala.

Chris: What do people need to do to download the EP?

Andy: My main site is Facebook.com/AndyHunter. They can pick up all the info there. It's mainly on iTunes and Amazon - most downloadable sites.