With a February release, into both the mainstream and Christian outlets, set for the groundbreaking dance album by ANDY HUNTER, Mike Rimmer spoke at length to the DJ and producer. 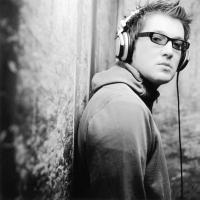 April 2002 and I am sitting in the Gibson CafÃ© in Nashville. It's an international sales conference from EMI and as the day progresses a number of Christian music artists are wheeled out to say hello, sing some songs and generally meet and greet the world. In the middle of pretty standard performances from the likes of Jeff Deyo, Kevin Max, new band Sanctus Real, Tait and others, the gathered delegates sit passively, listen, observe and consider. It's been a long week and on this Friday afternoon, yawns are stifled, eyes are drooping and onto the stage steps Andy Hunter. To our right an artist starts painting on a huge piece of wood. As the DJ does his stuff and the artist paints, a connection in the spirit is taking place. This is a new expression of worship and the passive audience continue to observe. It's a tough gig to crack and afterwards Andy confesses that he's not sure people "got it".

Months later, I feel sorry for DJ Andy Hunter! He is on the telephone and he's full of cold. He's just completed a club tour of America where he hasn't had a night off in a couple of weeks of staying up until dawn and then he's jet lagged coming back from the USA. As he talks to me from his home he's also trying to get everything packed up to move house in the few days he has spare before work kicks in again. Ever since he completed his debut album 'Exodus', things have got rather busy.

Back in the '90s Andy had started his journey with two innovative dance albums in conjunction with Robbie Bronniman of dba under the name Hydro. The collaboration produced two groundbreaking albums and served as an apprenticeship for Andy. He remembers, "I sat for months and months.almost years in the studio, helping out with arrangements, watching Robbie as he programmed and produced stuff. And in that time I really picked up a lot practically. Just watching. And now I have my own studio and I produce and programme. That time was great for learning. Also, the whole heart behind the music and about God anointing something that would go out to the clubs, into the mainstream as well as the church, with worship. So going back to Hydro and that whole vision with Hydro, it really gave me the foundation of what I'm doing and writing now."

These days the vision that Andy is carrying may be identical but the dance music scene has exploded since the mid '90s. "Within the Christian scene," he reflects, "there wasn't a big following of dance music. Things just got shoved onto the shelves, we hardly got interviews on it whereas now, it has grown and become a much bigger genre. People are understanding it more and wanting to know about it more, which is good." 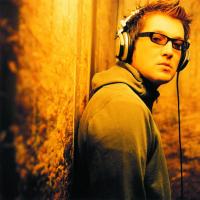 He continues, "I think the people that I meet within the church circuit, certainly once I've led worship, it really switches the light on. It's something that you have to experience to understand. But you still sometimes get people saying, 'Oh, have you heard that guy Andy Hunter? They're leading worship on the decks'. People are like, 'Huh? How does that work?' Or people don't really understand it until they experience it."

In recent years we have seen a resurgence of fresh worship here in the UK that has redefined how worship music sounds. For example the influence of guitar-driven pop rock has been very heavy in the Survivor circles. But there is a danger that even these new styles still box things in too greatly. "Yeah," Andy agrees. "I think within the Church we've boxed worship so much but obviously, worship is a lifestyle. One of the ways I express my love for God in my lifestyle is through my music and through who I am as an artist. Whereas church is where worship is sometimes just the 40 minutes before the preacher comes on, and it's got to be this type of music. That's such a shame and so, I like breaking that box down."

Whenever new worship emerges there's always some level of backlash from the established Church groupings. It happened in the '60s and '70s with rock'n'roll and sometimes it feels like dance music faces the same challenges in the new millennium. Andy shares, "I think it's just an ongoing thing that every so often, something new comes in within the Church and people HATE change. It makes people uncomfortable and when people are uncomfortable, they lash out. It's like, 'Oh it's got to be wrong!' or 'It's got to be bad, it's got to be evil because it's making me feel uncomfortable.' That's happened all through history within Church. Even when the organ came in - there were these beautiful orchestras in church and choirs and then the organ came in and kind of kicked them out! People were up in arms saying, 'The organ is from the Devil!'"

Andy continues, "Then obviously people became used to the organ and it was fine. Then as you say, rock music and guitars came in and then these were of the Devil but the organ was fine. It's an ongoing kind of circle. And so here we have the same thing happening because it's dance music and it's something different. I don't want to be here and say, 'This is the next new thing! Let's kick out the guitars!' I would just hate for that to happen. I just want church to be flexible and wide because God's a creative God and Heaven's a big place. There's room for everybody and there's room for acceptance of everybody, with all kinds of likes. That's what I'm hoping that this is bringing. It's just another genre that people can relate to." 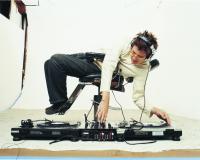 I suggest that perhaps one of the problems that people have with club style dance worship is the lack of words. Andy reflects, "I think that's partly true and we're so used to singing words and at times it becomes so kind of, that we just read these words from the acetate, or the video screen if we're lucky enough to have a video projector in church. We're reading these words and sometimes we're just going through the motions. Sometimes I feel they go in one ear and out the other. Whereas I think with music when it's instrumental, all those people kind of struggle with it at times because they think, 'How do you worship through this?' I know that a lot of people say that it gives room for that person to express themselves to God in their own way, with their own words and because of that, it's a lot more meaningful."

Isn't another problem that when you look at worship in a club setting, it just looks like a lot of people dancing? Is worship really taking place? "I think it's just about freedom," Andy explains. "When people are used to just dancing to music, it's good because when you bring a focus to God into that, they already have this freedom, that you don't have to just stand there and clap your hands, or hop on one leg or whatever. There's this freedom of movement. The dancers have already got that and once you focus that in with God, I think there's a lot more expression and freedom to express yourself to God, whether through your movement, or because the music is so loud that you can shout out to God. You can express yourself to God in such a way, because you know that the person next to you isn't going to look at you like you're some kind of weirdo."

But isn't, I ask, there another problem in that worship is a communal experience? Andy responds, "In some ways, but what I do when I lead worship is that I don't always just play music. I'll use the microphone to maybe read some Scripture, to bring some focus. So in the same way, it is a journey. Like the album title 'Exodus', it's a journey. A DJ will play a set of music which is a journey. So you're taking the dance floor, whether you're in a mainstream club, or whether you're leading worship, you're leading on this journey. So you're building it up with the music, then you play some quiet music for people to reflect on, then you build it up again. It's a journey and I think when I use the microphone, I'm bringing just the same as a charismatic worship meeting. You're bringing this focus on God and you're saying, 'Let's use this quiet piece of music, why don't we all kneel down and let's focus on God and be with God.' You're bringing the focus with the microphone, so people ARE going on that journey together as well."