Apollo LTD: The duo with the radio hit "One In A Million" 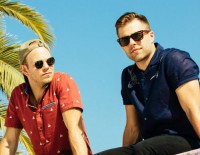 Nashville-based duo Apollo LTD are currently on the Cross Rhythms radio playlist with their snappy piece of electro pop "One In A Million". One reviewer described "One In A Million" as a track which "merges sweeping synths, arena-ready guitars, and a hypnotic hook evocative of 'Achtung Baby'-era U2 with a clever catchiness." It stems from the EP 'Out Of Body' released after Apollo LTD signed to Residence Music, a subsidiary of the most successful new independent label in Christian Music, Centricity.

Apollo LTD consist of Jordan Phillips and Adam Stark. Jordan spoke about Residence Music's plan to release a live version single of "Heaven", one of the songs on 'Out Of Body'. "We performed the song recently at an industry event and everyone came up to us afterwards and said things like where did you get that song from? It's amazing. 'Heaven' was actually inspired from something my dad said to me when we learnt that my mother had contracted cancer and he indicated how he wanted to enter into heaven with his wife. They are both still alive, praise God, and still looking forward to that time ahead of them. I have to admit they both cried when they first heard the song."

Adam and Jordan first played music together in a band in between day jobs as varied as landscaping, swim coaching and substitute teaching in the inner city school system. Apollo LTD emerged in 2015 with an independent self-titled EP. The website music.allaccess.com asked them how they came up with their name. Jordan replied, "My uncle was an astronaut when I was growing up. So I have always been enamoured by space (it's made its way into a lot of our material over the years. . . even in different bands.) Throw in some legal advice to add some letters or other words to 'Apollo' and you have Apollo LTD!"

Speaking about their influences Jordan said, "There is truly nothing we do that isn't influenced by the other. We both play, produce and write lyrics, melodies and hooks. Adam is an exceptional musician whose experience includes working as a session and touring lead guitar player. For me, music is guttural. As we've been able to develop the live narrative, we've been able to develop what the common thread is through all of our music and let this thread influence our songwriting."

Talking about their attitude towards creating music Jordan said, "We want people to understand that we're all experiencing many of the same things. Art and creation come from a place of introspection and self-awareness, but also a desire to serve. We want to create art to connect with people - to bring them together. A song can make you feel as if you belong. We know that feeling so well. Transcendent art creates empathy and inclusion. We're all trying to figure out this 'being human' thing. We all wrestle with doubt and darkness, but there is joy to be found in our circumstances and immeasurable beauty that surrounds us every day."