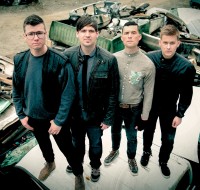 The release on America's Save The City Records of the 'Jupiter Bound' EP has been a giant step forward for the Oregon-based band Archers Rise. Christian Music Review website spelled out their feelings about the project. "It is a significant improvement from their self-titled EP. Since then they have changed their sound quite a bit. . . Their first release was good, but it was comparable to a number of other bands in that nothing about it made it stand out. On 'Jupiter Bound' however, Archers Rise have developed. . . [what could] be best described as '80s-influenced synth-pop, and it really sets them apart."

It's been quite a journey for the band - Tom Cox (vocals, guitar), Matthew Flood (keys), Lee Edwards (bass) and Jeremiah Wilson (drums) - to get to this point. The origins of the group go back to the Oregon-based experimental rock band Falling Up. That group's first two albums for BEC Recordings, 'Crashings' (2004) and 'Dawn Escapes' (2005), had both been successful and established the group on the touring scene. However, guitarist Tom Cox left the band to form his own group shortly before 'Dawn Escapes''s release and Tom was replaced by Jessy Ribordy. Cox began his new band under the name Becoming An Archer, which he felt reflected the season of his life where he was learning the aiming, the timing and the drive to hit the mark, to press toward his calling with an undivided heart. As with all dreams, Becoming An Archer proved to be an arduous journey, including several member changes, a long and difficult road to finishing a demo, last minute performance cancellations and a struggle to be heard amidst a sea of bands all competing for even a few seconds of attention.

Commented Cox, "It was tough throughout the entire time. I pressed on, I persevered. I knew my experiences and songs could potentially bless and encourage others. Then there was the sheer love of music and of God that drove my music and songwriting."

In the winter of 2011 there were more changes. Becoming An Archer was truncated to two original members, Tom Cox (guitar and vocals) and Luke Buchanan (lead guitar). Eventually Jeremiah Wilson and Lee Edward were added as more permanent additions to the band's lineup, playing drums and bass respectively. Keyboardist Matthew Flood joined a few months later, and Cox began writing new material. The band began working in the studio with producer Jessy Ribordy, the guitarist who, ironically, had replaced Tom in Falling Up. Becoming An Archer released a single "Be Alive" on iTunes and as promotion for the release of a planned six-song EP, the band released two demos, "Sweet Ghost" and "Ceilings", on their PureVolume page. But there were yet more lineup problems. Guitarist Luke Buchanan, having played on the six tracks, got married and departed the band. With all the changes, a new name, Archers Rise, was decided upon and when the EP was finally released in January 2012, months after its original planned launch, it was titled 'Archers Rise'. In truth, it was a solid enough offering though as Christian Music Review observed rather stereotypical. 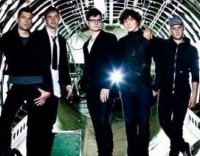 The band toured constantly mostly on the west coast throughout 2012, building up a big enough support base so that the fans through Kickstarter could finance another recording. The 'Jupiter Bound' EP, released on 3rd June, is already getting favourable reviews. Wrote JesusWired.com, "The song 'Jupiter Bound' throws you into the club with a solid four-on-the-floor kick. As the title-track builds in intensity, the lyrics help increase the suspense by creating a feeling of searching. "Explode through the skies/We leave behind these curses/There must be a cure." Equally enthusiastic was Christian Music Review who wrote, "From the lively opening track 'Sway With Me' to the upbeat final track 'Pocket', 'Jupiter Bound' is one of the best releases (albeit an EP) I have heard in a while. There isn't a song that isn't up to par with the rest, or didn't fit or belong on the release. Through the use of anthemic and melodic qualities, as well as catchy lyrics in each song, 'Jupiter Bound' keeps the listener attentive while listening and yearning for more when it comes to an end."

Tom himself commented about the EP's lyrics. He told JesusFreakHideout.com, "I think the deeper you dig, the brighter the gem. With 'Pockets' and 'Hello Sweet Pea', those are love songs inspired by my wife, and with Lee in the relationship with his wife and recognising those giddy stages. And that's from the Lord, being able to celebrate that oneness with your spouse. As far as with songs like 'Jupiter Bound', we wrote that from a very image-based place, saying 'okay, we're in a rocket ship and we've got to go to Jupiter' and Jupiter is known as the King Planet, and it's very involved with ideas like the Star of Bethlehem being followed by the magi and such."

Looking back on his years in the Christian music industry, Tom is hearteningly positive. "After I left Falling Up, it was one of those things where I grew a little bit bitter about the music industry. If you're a creative person, and I imagine a few creative people will be reading this, you know that just because you stop being an artist doesn't mean that your brain stops working that way. I'd always had songs and stuff in my head that I was putting together, but finally I went through some pretty intense personal things, relationships falling apart, and then I really dove back into [music]. It was a good release for me and a way to get back to the Lord. Then these guys came along, and I basically begged them to play in my band. They eventually submitted. It's more or less 'our' band. I don't want it to be 'Tom's band.' These guys definitely are just as, or probably more, talented than I am."

Archers Rise has a fresh new sound and positive message. Great artists! Hope their music continues to spread. We love these guys and pray for continued success-to the glory of God!

The artists that make Archers Rise so amazing are a "super spiritually" talented group of young men. They are a blessing to all of us who have watched them grow.