The continuing musical odyssey of Keith Ryecroft, John Paculabo and Sue McLellan, aka Parchment, continued on the front cover and pages 12 and 13 of the November Buzz. Their single "Light Up The Fire" had peaked on the BBC chart at 31, the New Musical Express chart put them at 26 and Radio Luxembourg at 21, and they had been interviewed both on Radio Luxembourg and Radio London. Despite this, the band refused to be carried away on a tidal wave of hype, preferring to prepare for the release of the song overseas (Pye Records put out the single in 18 other countries), and consolidate their position in the UK with a follow up single and the release of their first album. Today, of course, "Light Up The Fire" is still hugely popular as a worship song and is a permanent fixture in the Christian Copyright Licensing Top 100 Most Used Songs in UK churches. v Parchment were from Liverpool and another band from the north of England featured in Buzz in November were Fylde Coast-based country rock band Canaan. Gus Eyre, Dave Lloyd, Bob Fraser and Dave Lewis had got together in 1969 to play their own brand of Crosby, Stills & Nash-style music and had featured in concert with Graham Kendrick earlier in the year. Two albums followed during the 1970s before Canaan folded, but Bob Fraser is still in Christian music, having released a couple of his own CDs in recent years. v Upcoming events for the Christmas period included Start The New Year With Jesus on January 6th, 1973 at the Albert Hall, with Larry Norman, Parchment, Malcolm & Alwyn and Graham Kendrick on the bill, plus a special pre-recorded message from Dr Billy Graham. Due to high demand, the evening performance had sold out by mid-October, so an afternoon show had been hastily arranged. v A band in the front line in every sense of the word were the Advocates. The Lincoln-based British Youth For Christ associate evangelists had spent two weeks in Belfast during the autumn, working with Northern Ireland YFC and had played to packed audiences every night. 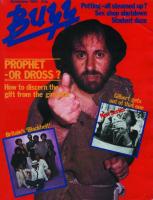 After the impact made at Greenbelt 82 by acts such as Paradise, Maxine & The Majestics and Clarity, Tony Cummings, newly appointed assistant editor of Buzz, investigated the rise and rise of British black gospel. Having absorbed the principles of the genre from Andrae Crouch, Jessy Dixon and the quartets of the Golden Age, UK black gospel was adding a dash of Earth Wind & Fire-style funk and (horrors!) a chunk of righteous reggae, to the outrage of some of the more conservative black church elders. Although Paradise and the other early Greenbelt stars faded as the 1980s wore on, their mantle was handed on to other outfits such as the Wades, the Escofferys and a superbly named London outfit, The Latter Rain Outpouring Revival Choir. That choir (sadly unrecorded) was led by Bazil Meade who, of course, went on to form the London Community Gospel Choir. v 'Age To Age' by Amy Grant was reported to be the fastest selling album ever in Word Records' history. v Chris Eaton was reported to have been seriously considering taking over cash-strapped Wolverhampton Wanderers Football Club's Molineux stadium and converting it into a Christian outreach centre. Fervent Wolves' fan Chris, at the time still a member of the Mark Williamson Band, had been achieving a certain amount of mainstream musical kudos in 1982 by having several of his songs recorded by Cliff Richard. v Speaking of the great man, Buzz in December printed a debate between Cliff Richard and the now discredited pop impresario Jonathan King. Flagged as a Battle Of Beliefs, it turned out to be rather one-sided; King satisfied himself with statements such as "It's totally unimportant whether there's a God or not," to which Cliff replied, "Somebody who believes there is no God has got more faith than me." v Buzz magazine reported in November that, despite Keith Green's death earlier in the year, his widow Melody was continuing the work of Last Days Ministries. She was fulfilling Keith's engagements, with the remaining elders looking after the administration of the community. 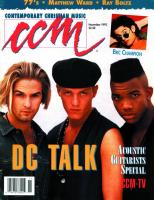 Still struggling for survival, Cross Rhythms' next issue, number 13, was not published until February 1993, so let's concentrate on the US scene. On the cover of CCM magazine for November, Toby McKeehan, Michael Tait and Kevin Smith (as he was then), aka DC Talk, celebrating the release of their album 'Free At Last'. Back then the band were still to discover the rock guitar and were described as "pop hip-hop" by CCM. Said Toby McKeehan, "The hip-hop generation, 1992, is a culture that has a chip on its shoulder. I think that there are a lot of underground rap records selling millions that are sowing seeds of anger." The November 16 CCM Update reported that ForeFront had clocked up advance sales of 'Free At Last' of 175,000 units. v Also in November, news that EMI Music had agreed to buy Sparrow Records for an undisclosed number of dollars, and that the world's largest publisher of Bibles, Thomas Nelson, with reported annual sales in excess of $93 million, had paid $72 million in cash to acquire Word, Inc. v Still on the business front, after years of speculation, the Zondervan Corporation, owners of Benson Records, had decided to put the label up for sale. Benson was reportedly suffering after the loss of their deal to distribute ForeFront product, and the defection of Carman, plus his entire back catalogue, to Sparrow; the combined loss of revenue was being estimated at $8-10 million per year. v Amy Grant was the featured artist in December's CCM magazine, on the release of her second Christmas album 'Home For Christmas', the one featuring her re-write of Chris Eaton's "Breath Of Heaven". The reviewer in CCM raved about it, "one of her finest performances on record", he/she said. Amy was also a new mom, her third offspring Sarah having arrived in October. v To celebrate his seventh number one single ("Sometimes By Step") and his first number one selling album ("The World As Best As I Remember It Vol 2"), Rich Mullins was given a new hammered dulcimer by Reunion Records. Said Rich, characteristically, "I appreciate receiving this as a gift, because I hate spending money on musical instruments, but I love having them."

Does anyone remember the black gospel-funk group paradise and do they still own a copy of their album 'Worlds Midnight'?

anyone know where keith and lorraine rycroft are these days...i heard they moved to runcorn...lost touch with them in early 1980's...used to baby sit the girls for them...love to hear from them now

To Mike Millard
Canaan's guitarist Gus Eyre is a friend and is a full time musician and evangelist. He'd give you more details. His web site is www.gus-eyre.com but you need to wait a month or so for any response. Gus is in hospital at the moment recovering from a heart valve replacement.

always wondered what happened to canaan, i knew them all back in 1969 when i was only 17 only wish i had a copy of buzz mag now. great to have a blast from the past , i now write articles for one day god willing publication. keep on truckin, jesus is coming soon.

I'm one of the Canaan guys. Be good to hear from you