Arinola: The gospel worship singer with a much praised debut album 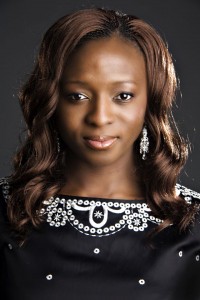 One of the best of the new wave of gospel worship albums to emerge in the UK in recent times is 'The Secret Place' album by London-based singer, songwriter and worship leader Arinola. Cross Rhythms' reviewer wrote, "Arinola's rich, soulful vocals avoid the pitfalls of "pushing too hard" and this gentler, purer approach is mirrored by a controlled, piano-led production by Tolu Okeowo which strategically adds occasional guitar/bass/drums for a band sound that never overwhelms singer or songs." To find out more we quizzed the lady about her life and music.

The singer/songwriter was born Arinola Anthonia Fabiyi in Lagos, Nigeria. She said, "I am the third of four girls. My dad was a crude oil trader for a petroleum company in Nigeria and my mum worked for a TV station. As a young girl, I was very introverted and spent most of my time either in school or singing in the choir of the local church. Although life started off on a good note financially for us as a family, my dad lost his job when I was around seven years old which meant that life got really tough and all the luxuries at the time had to be cut off. While I have good memories of my childhood with my family, that season of having to abase and abound moulded some of my values as a person. I saw my mum stick close to my dad when he went from riches to rags."

When she was 20 years old, Arinola relocated to the United Kingdom with her family to further her education. While in Nigeria she and her family had attended a Catholic church in Lagos every Sunday but it was in the year 2000 that the spiritual lights really came on for the young woman, who was by then studying Computer Science at Kingston University, London. She recounted, "One of my sisters dragged me to the church she attended at the time, which happened to be a Pentecostal church. That whole process led to an understanding about a relationship with Jesus being at the centre of my walk with God, rather than just being part of a religion with rules and regulations. This process, other life experiences, has had the biggest impact on my music in terms of songs I write and the values that shape them."

In 2002 Arinola graduated and then spent her post-graduate years working in IT and Business Administration. Her musical gifts were developing alongside her career. She explained, "I had been a backing vocalist for two years at my home church, Jesus House in Brent Cross, London, but I became a worship leader in 2003 after I had the opportunity to take a solo at one of the worship events the church was hosting. In 2005 I took the first steps towards developing myself in this area, taking various short courses in vocals as I started to understand that, even though God gives everyone a gift, that famous parable teaches that we have to develop and make use of them. I still had a regular job, which I combined with my love for singing. However, in 2010, I made the decision to make this passion a fulltime career and started to study for a HND in Vocal Performance, and subsequently an MA in Music and the Creative Industries, which I have now completed. I am also acutely aware of the fact that I still have a lot to learn in this area and have recently committed myself to continue to learn and develop. Learning from other musicians and worship leaders is going to be a key part of my development in the coming year."

Arinola is a lead vocalist and worship leader with The Tribe of Judah, the worship team at Jesus House in Brent Cross, London. It is a thriving fellowship and part of the Redeemed Christian Church of God. Speaking about her church Arinola commented, "It is passionate about helping people discover their passions and purpose and this has been instrumental in my growth as a worship leader. The church motto summarises this ethos: In pursuit of God, discovering purpose and maximising potential."

Today Arinola Nnatuanya lives in Middlesex with her husband and two children. She explained how she came to make her 'The Secret Place' debut album. "Over the years I had written a few songs that helped me overcome some personal challenges. My husband kept encouraging me to put them onto an album, as someone else could benefit from them. So I worked towards creating a worship experience for the listener. I recorded the album while studying for the HND and MA in music. The main thing that sticks in my mind about the recording sessions is the time Tolu and I spent in worship before recording each track. We would pray and worship and invite God's presence; those were priceless experiences that had a huge impact on the album. I had the privilege of launching the CD in my local church at the end of 2011."

One of the songs on 'The Secret Place' which is particularly precious to the singer/songwriter is "Faithful Father". Explained Arinola, "It was written when I had my first child. It was a hymn of gratitude to say thank you for the gift. Another song on the album, 'God Of Everything', I wrote when I was searching for answers regarding my music career. I got to a point where I accepted that it doesn't matter what the outcome is, God is still in charge of everything."