Army Of Bones: Martin Smith talks at length about the exciting new band 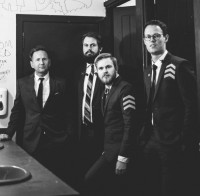 The launch gig for the release of the self-titled first album by Army Of Bones at The Camden Assembly bodes well for the future. That concert was packed to the gills and their debut album is already receiving praise with Fortitude magazine calling it "a collection of thought-provoking creations reflecting on the sensational power of music to heal divisions" while Army Of Bones have received praise from The Revue and BBC Introducing. Intriguingly, what many of the broadcasters and journalists now enthusing about the Brighton-based "newcomers" have yet to discover is that the band's lead singer and songwriter is one of the most important figures in British Christian music. Martin Smith and his band Delirious? took their anthemic brand of pop rock into the UK pop charts while Smith's worship songs were pivotal in awakening the world Church to the potential of pop rock music as a vehicle in worshipping God.

When Delirious? called it a day in 2009 Smith's legion of fans wondered what was next for the singer/songwriter. The one thing that few expected was that he would return with a touring band and one pitched squarely at the mainstream music arena. Not for father-of-six Smith the easy option of a Delirious? Mark 2 outfit. Army Of Bones started at the bottom playing small gigs wherever they could get them. As Army Of Bones manager Tom Limebear explained, "On our first tour it wouldn't be unusual to play to 15 people in a dingy bar." But, bit by bit, the band's thrilling rock soundscapes, which seemed to have absorbed the best of Brandon Flowers, old Radiohead and new Foals has been catching a new young audience as well as Delirious? nostalgists. I spoke to Martin about his past and his future.

Tony: When you laid Delirious? down, did you feel in your heart that's it for bands and touring?

Martin: That decision was made in 2008; we ended in 2009. Emotionally - just speaking personally - I was pretty fried by that stage. We'd had a very intense period of 17 years together, probably 14 of those on the road, quite intensely. It was great - I look back with a lot of fondness on those years, amazing times - but there's only so far you get and you think, 'This is exhausting. I still love this, but I feel that there's another season coming.' Initially, all I could focus on was my family: I wasn't really thinking, 'Is this going to come again?' I just pushed those things to the back of my mind. 'Right now, I need to just get off the road and be at home. I've got six kids and I'd like to see them more; I would just like to do that for a season.' It turned out to be a great time. Had I not done that, things might have naturally fizzled out anyway, but having had that really good break I feel very energised; then, of course, you start getting dreams again. You wake up in the morning with ideas, dreams for the future, and songs: it always starts with songs.

Tony: When you were in your God's Great Dancefloor era, writing these exciting new worship songs, did you feel, this is me for the next 10 or 20 years?

Martin: I don't know whether I ever thought, 'This is it for 10 years'. I think was I finding my way. I don't think I was intelligent enough to figure anything out; I was just waking up in the morning, going with the flow. We released a couple of records. Amazing that Chris Tomlin took one of those songs and put it around the world. I was still feeling my way, I was still recovering emotionally in various different ways; excited about being involved at St Peter's in Brighton, being part of that new world. It was exploration, and I don't think I had a blueprint of where it was going. Definitely as it went on and on and on, I started to get more and more passion to think, 'I would really love to write some songs about some things that really mean a lot to me.' Not that the other stuff doesn't, but just stuff about my life. I also felt like I was at a stage where I could do that. We've been married for 23 years this year - just how that works, or doesn't work on occasions, with the job and life that I've got, how we navigate through that. A lot of the Army Of Bones stuff is my thoughts about that, just being thankful that we're still here, still together - songs about some of the struggles along the way. So it's a very honest record.

Tony: When you first got the green light for Army Of Bones, were there immediately musicians you were working with in your church and you thought, these guys should be part of the band?

Martin: Jonny Bird is my right-hand man. I met him when he was 19. He was a music student in Brighton, came to my house to do a little bit of programming for me, and basically never left. I remember cooking him a breakfast that first day and he just woofed the whole thing down. I said, 'Are you all right?' He said, 'Yeah, great!' I said, 'Do you want another one?' So I made him another cooked breakfast: it was like he hadn't eaten for three years, like a student. It's been amazing to see his life. He's got married and now they're having a baby. He brought a lot of energy to me, a lot of inspiration: 'Come on, we can do this! We're not done!'

Tony: How has he supported himself?

Martin: He's out being a full-time muso; he's producing records, he works in the studio with me, we're playing together all the time. He's earning a living from music.

Tony: Is Army Of Bones technically a professional band?

Martin: Everybody's a session guy, doing lots of different things; so technically it is, I suppose. 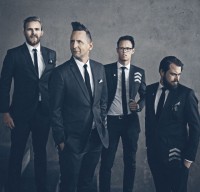 Tony: Are there still days when it's not making any financial sense, but you're keeping to the plan that it will eventually pay for itself?

Martin: Well, that'll be the dream. Unfortunately, with any new project - whatever you pioneer - usually you lose money. That's the situation we're in at the moment. You have to be brave, don't you; and I'm learning how to keep being brave. The older you get, it's easier to stop taking risks. I used to sing about being a history maker, and doing this is doing that: I've got to do that.

I love the new Army of Bones album. It's fresh but with a distinctive Martin Smith feel to it, I'm convinced it will do well.
I once met Martin Smith at Spring Harvest when I was part of the worship team there and was struck by his humility, one of the biggest names in UK Christian music and he took time to speak to me and put the worship team first over his slot.
I'm now a pastor and still recount how his lack of rock star pride (which sadly ruins so many) impacted me.
I pray he is a blessing to his local church and they do great things to further the Kingdom of God in Brighton!