As I Became One With The Mud: A report from Cross Rhythms Festival '98 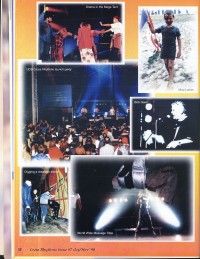 Reformation of a generation

We'd been saying for months that this was going to be something special. It was more the particularly strong bill. Chris Cole, Jonathan Bellamy, the whole organising team had simply a sense that God had something unique planned for us. He did. As Friday progressed and the crowds, peering questioningly at the increasingly overcast sky, assembled at Okehampton, stabs of creative excellence dispelled any rain worries. Psalmistry were spectacularly loud and gloriously exuberant; World Without End brought an engaging pop guitar lilt; Viola lifted our hearts to the King; Louis Els spoke with prophetic insight; and Steve demonstrated an uncanny ability to win a crowd with their wistful Brit pop.

By the time the UCB Cross Rhythms Launch Party kicked off in the Mega Tent I, and all the rest of the gathered throng, were ready to celebrate. Britain's first contemporary Christian music station was duly birthed with a thrilling multi media ride of giant special guests, giant screen video clips and a shofar blaring with eery intensity through the tent and out across Europe. As we sang to Delirious?' "History Maker" we did indeed feel that this was an historic step being taken by the Church.

Later I saw Mike Rimmer and he told me he'd been moved to tears by the Party. So had I. Matt Redman took us on in the appropriate way, some heartfelt worship. By the time DBA thundered into the late night set, I'd already felt I'd experienced a very, very special festival. But there was still so much more... By Saturday the rain had settled in but there was still a damp band of intrepid hardcore rock heads to experience the raw, -cathartic sound of Unwritten. And there were an equally heartening number of listeners to catch the avant guarde instrumental musings of Secret Archives Of The Vatican, where ethnic world music was artfully fused to dance beats. Split Level played an exceptional set full of their gritty, anthemic fire. The Wades were late but made up for it with sassy R & B. And Jillian utilising all her theatric skills roped in a bevy of kids to minister deeply with her testimony-turned-to-music. But it was an 'unknown' Australian who was to take the crowd to unexpected heights.

It had always seemed a perverse thing to do - name a festival after an album only independently released in Australia; fly in its maker, though David Evans has no record company in the UK; and give David centre stage at the festivals with a UK band -London's River Deep - after minimal rehearsal. But the anointing we'd sensed on the 'Reformation Of A Generation' album was now exposed in all its pulsating power. After the Australian prophet musician had won the crowd with flamboyant rock theatrics, bringing an actual surfboard to move over the throng, he took the truths conveyed by his blue-eyed soul voice, deep, deep into our hearts. The Spirit came powerfully. 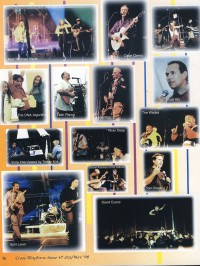 Reformation of a generation

By the time Tony Fitzgerald came onto the platform, our hearts were open to God. The planned message was abandoned in favour of ministry, words of knowledge bringing forward individuals pushing through the crowd to receive the healings. The presence of God hung tangibly in the place. There was still time for more great things; the World Wide Message Tribe overcame a malfunctioning computer -by now the damp was making all equipment unreliable - to turn in a blistering pyrotechnic set and River Deep showed more of their delightful ability to produce satisfying eclectic funk rock music - but with David Evans the festival had reached a spiritual epicentre.

And so to Sunday. The incessant rain had by now turned the site into a glistening sea of mud. Cars, those able to move without tractor tows, were already making for home before the Sunday morning service started. But many stayed, picking their way through the swamp to stand in the Mega Tent and receive. Sue Rinaldi, with tremendous sensitivity led us in heart-warming worship, and then Bob Gass, the author and Bible teacher, spoke to us all with the soul-gripping authority of the prophet. We stood there, many ankle deep in mud for 50 minutes, as he took us through a roller coaster of emotions before leaving us trembling, breathless and utterly convinced that Christ deserved ALL our devotion.

As I squelched through the fields I glimpsed something. The rain and mud surrounding that Sunday morning service had become a giant metaphor for the Christian life itself. Were we going to turn away at the first disruption of our comfort zones? Or were we going to battle through to overcome the obstacles and find God's heart? I for one was so, so glad I'd stayed to the end. So were many others.