Asylum: A ministry to goths, metalheads and alternative rockers 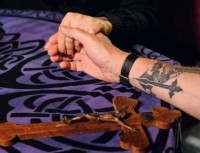 Founded in by alternative music visionary Billie Sylvain as a street outreach frequenting Soho pubs, clubs and live music venues to share a positive experience of Christ with alternative people, Asylum has grown to become a church-come-nightclub with a difference. Targeted at followers of metal, goth and alternative rock music, it seeks to be a spiritual home for those young people who would find themselves at odds in a more traditional church. It's current venues are St Giles In The Fields Church, 60 St Giles High Street, London WC2H 8LG and Garlic & Shots, 14 Frith Street, Soho, London W1D 4RD. I quizzed Billie about Asylum's highly unusual ministry.

Tony: A church and a nightclub pitched at metal, punk and goth followers is a pretty radical idea. Is it still needed?

Billie: I think as long as there is an alternative communality it'll always be needed, whether that community dresses as goths or metallers or not.

Tony: Some might say that the alternative culture and Christian faith are incompatible. How would you respond to that?

Billie: I would say they are compatible because both are counter-culture and non-conformist, both are concerned with being true to yourself, both are about creativity, tolerance, acceptance and both are unafraid to face the dark side of life.

Tony: When Cross Rhythms magazine first started, Christian involvement in the alternative arena was at a high point with bands like Seventh Angel. What British bands are there today flying the alternative flag?

Billie: I was away from Asylum due to ill health for five years and was unable to keep up to date with my band knowledge like I used to. But I'm slowly getting back into it and right now I know of Wytch Hazel and April33.

Tony: You make a point in your literature about alternative people often feeling alienated by standard churches. But if I went to one of your meetings dressed in a suit, would I feel out of place and even encounter some mild hostility?

Billie: We've had people turn up dressed very conventionally lots of times and they've always said they felt welcome. We have a couple of goths who wear black suits sometimes. . . does that count!? 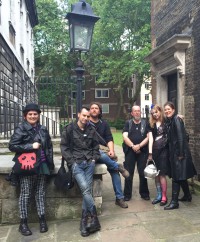 Tony: Leading on from this, are Asylum Christians encouraged to interact with other churches?

Billie: Yes, some have churches they belong to or go to regularly. And Asylum has a good relationship with St Giles church where our fellowship currently meets.

Tony: How successful has Asylum been down the years in introducing people to active Christian faith?

Billie: Asylum's ministry is mainly to break down the misconceptions some people have about Jesus and what it means to follow him. And also to be there for those Christians who are not that into a more conventional church format. We've seen some people become Christians over the years, but mostly we sow seeds in people's lives.

Tony: What have been the last three or four bands to play at The Crypt and have they been Christian bands?

Billie: The Crypt is a new club night that we started in July. We are in the basement of Garlic & Shots where we hold the night and there's not enough room for bands sadly. But we're hoping to find a solution at some point. When we were based in The Intrepid Fox before it closed, we had both Christian and non-Christian bands playing and it's the same when we do bigger events.

Tony: Do you have a close connection with Meltdown?

Billie: Asylum and Meltdown have supported each other for many years. In fact Dave Williams very kindly came to speak at the Asylum Fellowship a few weeks ago.

Tony: Can you see Asylum growing in the next few years?

Billie: Yes, we always have new people coming to join us and others that support Asylum from all over the UK and the world.

I have been to Asylum, London on several occasions and met with some of the members for lunch a few times. They were friendly, accepting and interesting people. If I make it back to the UK, I will go and visit them again.