Currently in the US pop album charts is yet another act to have crossed over from the insularity of the US CCM scene, AUDIO ADRENALINE. Jan Willem Vink reports. 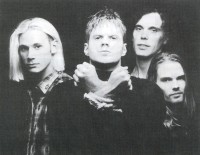 The career of Audio Adrenaline is beginning to bloom. That was something that became quite clear when I was present at their performance in Chicago's Rosemonth Auditorium for an enthusiastic crowd of over 10,000 people. Audio Adrenaline has been part of DC Talk's 'Freak Tour' and together they've done 60 concerts performing for over 360,000 people.

For the European observer, Audio Adrenaline's current success might be a surprise. Over the past couple of years this band has grown with rapid speed and can currently be regarded as one of Christian music's foremost bands, amongst the likes of Newsboys and Jars Of Clay.

The members of Audio Adrenaline basically met at a Bible College. States guitarist Barry Blair, "We all went to a small Bible College in Kentucky, I, Will (McGinniss, bass) and Mark (Stuart), our singer. We met there as freshmen and we started playing together. Bob (Herdman, keyboards, rhythm guitar) came along a couple of years later."

Will, Barry and Mark were in a band called A180 at the time when Bob came along with a song he had written called "My God", mixing metal and rap. Eventually DC Talk's Toby McKeehan got his hands on one of their tapes and handed it to ForeFront, who signed the band on the basis of that song, a strange marriage between metal and rap.

Two of the members of Audio Adrenaline were able to finish their classes at the Bible College. Barry: "Two of us did. We were like in our senior year when we started getting attention from record companies. A couple of us finished and a couple of us just had a few hours to go. But we had to move to Nashville and get on the road again."

Will credits the time at the Bible College as having a major impact on Audio Adrenaline. "I think if we had never gone to Bible school, maybe we would have never been together. God had that in his planning and on a spiritual side, the Bible classes that we had and the wisdom that we gained, it's very evident in our songs and in our lives now, it meant a lot to each of us.

Barry agrees. "We've been friends now for 10 years and roommates and travelled together like brothers. That makes it so much better as a band, it's not just a business, and we're all great friends."

Audio Adrenaline's eponymous album sold well for a debut. But it's not an album the band is proud of. Comments Barry, "The first album was more like programmed, drum machine computer music, with a lot of rap influence and hip hop influence. It was a little bit of our own direction, it was a new trend and we were all going into that a little bit, with groups like DC Talk. Mostly I think it was kind of a situation that we got in with our record company and they kind of pushed us in that direction. We all grew up on different kinds of rock 'n' roll music. And so over the three records, we kind of slowly have gotten our way back to what we grew up on. That is live sounding rock and roll with guitars and live drums and organ and keyboards instead of a lot of computerised stuff."

In an interview with CCM magazine in 1992, Barry described their music as 'alternative dance', a term that right now must make the band cringe as he commented in the same magazine four years later: "If it was up to me," Barry declares, "I would burn them all, make them disappear. It did well it sold 75,000 units. But a lot of people don't understand. It is more than about being a good record. It's about it being a true representation of us. There is nothing personal about that record."

'Don't Censor Me' was more of a true representation of where the band were heading. "We were kind of going through a stage in our career where we felt the media and other forms of communication out there were totally censoring anything that was Christian," says Will. "They made Christians seem like we are a minority or weird. We really felt in our heart it was time to put out an album that was very bold about Christ and targeted the media and the kids and told them they had to go to their schools and be bold about Christ and also call MTV and tell them you want Christian morals and values in their programmes. It was kind of an album that we got behind, and it was definitely a great thing."

The message of 'Don't Censor Me' seems to become more prevalent now, as more bands are getting very clear with their message. Do Barry and Will agree? Will: "I think definitely more people are not compromising their lyrical content to gain mainstream acceptance, they're trying to do it through creating the best art that they can. I think it will work. Hopefully eventually they won't categorise our music by the lyric and instead look at the genre and throw it in and people can choose based on the music that they can listen to."

'Don't Censor Me' was definitely a transitional album, as became apparent when Audio Adrenaline released 'Live Bootleg' last year. More than anything, this must have been a tool to prove that there was only one thing Audio Adrenaline could do best: play loud, guitar-driven rock music. In the meantime the band was already writing songs for their next album. "What we did after this tour, we got off the road," says Barry. "After our tour with the Newsboys we had a lot of song ideas. Each of us had come up with two or three song ideas and we got together every day and rehearsed. Someone would bring in an idea and every one would start to contribute to it. It's kind of how we work songs out. So every song is pretty much like a group effort."

The members of Audio Adrenaline teamed up with producer John Hampton for the production of 'Bloom'. Hampton certainly has an impressive track record, as his work with the Gin Blossoms and Spin Doctors proves. But as Barry says, most progress came from the band itself. "Really we got together and wrote the songs. And we had a whole lot of it worked out before we got into the studio and John. But he kind of helped put the finishing touches on the song, by helping us a little bit with the arrangements, like he would say, 'You should drop this section here,' or, 'You should do stuff like that,' just to help the overall song flow real good and also he was the person that made the record sound the way it does. The drum sounds and the guitar sounds and things like that."

Will agrees with Barry this album is a true representation of the band. "I think we'll always try to stay on the cutting edge of music. Whatever that means musically, I don't know. Definitely it will be very guitar oriented, very rock driven, classic rock with modern sounds, I think would be the best description."