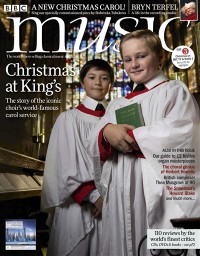 BBC Music magazine has been published since June 1992 and would be, for many, the go-to print magazine for news and reviews of what is generally understood to be "classical" music which here includes choral singing and with occasional looks into the worlds of jazz and world music. Its core readership would be listeners whose default radio settings tend to be Radio 3 or perhaps Classic FM and who find the venerable Gramophone magazine overly specialised and sometimes too technical. The front cover tells us that it is "the world's best-selling classical music magazine" so they must be doing something right and while the current publishers are the Immediate Music Company Limited with the might of the BBC behind them they really should not fail, even in these challenging times for traditional media.

We are looking at the Christmas 2018 issue which has plenty of interest for those who enjoy Christian music or perhaps we should say music from a Christian background. The cover headline is "Christmas At King's" with two smiling choirboys in traditional garb along with the cover CD from Wells Cathedral Choir: 'Love Came Down At Christmas' (reviewed elsewhere) so plenty to gain our attention. Will the contents match the cover?

Some statistics: in this issue there are, including front and back covers, 124 pages with plenty of colour pages. 37 pages are adverts, usually full or half page. Tricky one, this. Commercially I am sure these are crucial and for listeners to the commercial-free BBC radio channels they provide information that we might not otherwise get as they mainly cover new releases and concert performances. Taken with the 26 pages of reviews and "brief notes" (25 one-line reviews with thumbnail picture crammed into one page plus one column, each with a star rating) we do at least get to know about some of the many new and re-releases. The cover tells us that there are "110 reviews by the world's finest critics" so there will surely be something worth hearing investigated in there although the idiom about wood and trees comes to mind. The critics give opinions as well as facts so we get a "Recording Of The Month" which has a five column review plus a one column interview with the performer. The album is a collection of keyboard music by Johann Sebastian Bach, played by Vikinngur Olafsson and it receives a double five star rating (and that is five out of a possible five for both performance and recording). Turning the page we get the "Christmas Choice", five brief reviews over two columns and a longer review of the top choice for 2018: 'Christmas With Sonoro' (reviewed elsewhere on the CR site). This is followed by three pages of orchestral reviews then concerto and opera reviews, none of which concern us before we reach "Choral & Song": 17 reviews (including re-issues) over four pages with some being of interest to us. Then there are two pages of Chamber reviews and two and a half of Instrumental before we reach a full page "J S Bach Special" on the Decca/DB 'Bach 333: The New Complete Edition' set of 222 CDs (count 'em) plus DVD and two books that I do not suppose will come my way any time soon. Sigh.

Getting to the meat of the magazine - the articles and columns - there's a two-page spread on The Cliburn International Junior Piano Competition And Festival; a short news story about Alistair Rutherford who cycles for charity dressed as a viola (I lie not); a fascinating piece about whether music can truly be fast or slow ("Whether its pulsing at 160 beats per minute [the kind of speed that the DJs of Ibiza get to at the end of their job, roughly the tempo of the Beethoven's 'Coriolan Overture'] or 40 bpm [the etiolated slowness of the Prelude to Wagner's 'Parsiful'], all the music is moving through the air in soundwaves at exactly the same speed: the speed of sound is dependent on environmental conditions, but in a concert hall at around 20 degrees Celsius, soundwaves move at around 767 miles an hour. So when composers are manipulating this sense of speed, they're playing with an illusion"); a Music To My Ears spread telling us "what the classical world has been listening to this month" and revealing that both mezzo soprano Karen Cargill and guitarist Thibaut Garcia have been taking in a lot of JS Bach; Times columnist Richard Morrison asking "why do amateur choirs insist on singing bad pop arrangements"; a six-page article about the 100th anniversary of King's College, Cambridge's Nine Lessons And Carols ("the service tells about the birth of a child, and that reaches out to everyone"); an interview with 90-year-old composer Clemency Burton-Hill; an intriguing survey of "the best - and worst - novels written about the great composers"; a survey of organ music "just waiting to be discovered"; a piece about the world's largest performing arts centre, which if you didn't know is the National Kaohsiung Centre For The Arts in Taiwan; and a Rewind page where bass-baritone and Christian Bryn Terfel talks about his past recordings. 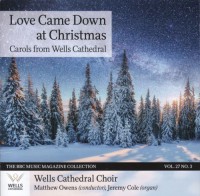 Then there's a piece about composer Bob Chilcott in which he spoke about John Rutter's "O Holy Night" ("I said to Rutter that I loved his choral arrangement of it, and he said he can't stand the piece, which made me laugh. I love it."); an account of a teaching weekend in a stately home in Kent with jazz pianist Mark Polishook; a piece on Herbert Howell, "the atmospheric Carol Anthems are just the start of this British composer's remarkable outpouring of choral music"; a Christmas quiz which promised "30 festive-themed questions to answer" though questions like "Can you name the Russian soprano who duetted with singer Robbie Williams at the opening of the 2018 FIFA World Cup in Moscow?" seem somewhat lacking in festive content; the words and music to a new carol "Good-Will To Men, And Peace On Earth" commissioned by BBC Music from leading composer Dobrinka Tabakova ("I wanted to return some liturgical mystery, but add another more playful element," said Ms Tabakova); an interesting article on the origins of carol evergreen "Silent Night"; and a closing piece on Howard Blake, responsible for The Snowman classic "Walking In The Air".

Being the Christmas issue, this issue comes brimming with material of interest to Christian music followers. Other issues of course won't have anything like as much. But overall BBC Music is certainly worth looking at if you're a classical buff. And if you want a taste of what is on offer before parting with your Â£5.99, a visit to the official site at http://www.classical-music.com/ may help you decide.