With a new EP and one of the more innovative albums of recent times under their belt, BAND_C are buzzing. Lins Honeyman reports. 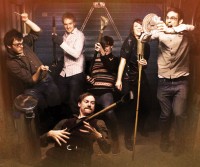 From the Hollies and the Smiths to Oasis and the Stone Roses, the city of Manchester has an impressive track record when it comes to being the birthplace for innovative musical aggregations. The latest addition to this roster, Band_C, may not have yet reached the heights of acclaim as those icons but they are currently making some of the most breathtakingly inventive music in the whole music field. Band_C's quirky, highly intelligent art pop plus their willingness to work hard at plying their trade at a variety of live venues throughout England mean that their fan base is extending far beyond their hometown.

Having gone through a handful of personnel changes over the years, not to mention their original name of Badgers & Countrymen getting an underscore and a severe edit, the current line up of Band_C consists of founder members Andrew Slack (lead vocalist, guitarist and producer) and David Stout (vocals and drums) with help from trumpeter Andrew Swarbrick and brothers Oli and Sam Kyle on bass and lead guitar respectively. Add to the mix singer, solo artist in her own right and wife of renowned Christian songwriter Chris Eaton, Abby Scott, and it's clear that Band_C have come a long way since their tentative 2002 debut 'Omniumgatherum' - an instrumental work that effectively dipped the band's collective toes in the water of writing and recording original music. The following years brought forth the albums 'This' and 'Word' before the release in 2009 of the acclaimed and highly original 'HW.T.KLL.TM..N.CRDBRD.BX (How To Kill Time In A Cardboard Box)', which saw the outfit find their creative feet and draw upon musical influences ranging from radio friendly pop, funk, rock and even French cafÃ© music.

This year's double A side EP of new songs 'Armour/Guessing Games' has further cemented the band's reputation as one of Manchester's most exciting and captivating groups and, thanks to a number of slapstick promotional YouTube videos and a penchant for appearing on stage bedecked in bright red military regalia, Band_C cannot be accused of being shrinking violets when it comes to lifting their heads above the music parapet in an attempt to get themselves noticed.

I catch up with band members David Stout and Andrew Slack, who explain the appeal of Band_C. "We're all about interactivity," says Andrew. "It's all about getting involved, people dancing and enjoying it. When you go to a gig, it's as much theatre as it is music so we want to put on a show. People seem to enjoy our gigs because they're entertaining and slightly ridiculous. We're a bit eccentric, frankly!"

"We're essentially a group of mates who happen to make music together and, because we enjoy doing that, we want other people to enjoy it too," adds David. "Christians are often perceived in the mainstream music scene as being quite dour or sad but that's not actually the reality. We want to portray a fun, energetic and enjoyable side of our personalities and that hopefully comes through in our music."

I wonder what part their Christian faith plays in their music. "Obviously it's a huge part of our lives," confirms Andrew. "I see a huge need for Christians to be in the secular music industry because it's saturated with bad role models and subject matter. It's tricky lyrically-speaking to find a balance. We really want to get the Gospel message in there but, if we go too far - and it's not that we're avoiding it - we've simply got no chance. We write lyrics that have Christian morals in them. We want to get the message in there and we want people to listen to songs that lead a good example but we really see our real witness in the way we act on stage and being good role models."

Keen to make sure their work is heard by as wide an audience as possible, it seems that Band_C lean more towards the mainstream market than simply just the Christian music scene. "We play in various gig venues in the Manchester scene and in other cities like Sheffield and London so we perhaps are more geared towards the mainstream," explains David. "However, some of the band also play alongside Becky Higg who is a very openly Christian artist and Andrew, Sam and I are also the backing band for Christian band Golddigger. We are involved in the Christian music scene but not necessarily as Band_C."

With a refreshingly leftfield approach to making music, the secret to their individuality is simple: "We have this adage that we want to be original but accessible and I think we do it fairly well," offers Andrew. "We want to come up with songs that we want to play rather than being dictated to by fashion," agrees Dave. "Obviously, we like some of the stuff that's in the charts - the vast majority is rubbish though - and there are parts of our album that reflect that but also there are a whole load of other influences that we draw on."

Continues Andrew, "Oli and Sam come from a rock background, whilst Dave is more funk and I'm jazz and, with Abby Scott on vocals, we've now got pop in there too. Abby's vocals add a different element to the band. The contrast of a female vocal is always nice and she's got an amazing voice."

I suggest that having in the band the wife of Chris Eaton - writer of songs for Cliff Richard, Amy Grant, Janet Jackson and many more - can't hurt either. "His is a different sort of market to ours," offers Andrew. "I occasionally run stuff past him and he says what we do best is the fun side of things." "He's very encouraging," confirms David. "If he's at a gig, he's very supportive and he'll tell us what he thought of the gig. But he doesn't like to get too involved."

Not that the Andrew, David and the band need too much help when it comes to making quality music and, true to character, they make sure the whole process is as fun as possible. "The track 'Killing Time In A Cardboard Box' on the last album was basically a game we played in the band where we told Andrew that he had to write a song with that title," laughs David. "We thought it would be really hard to write a song with that title but it turned out to be one of the best tracks on the album."

"There is normally a process," reassures Andrew. "Me and Dave write the songs and usually the melody and the lyric are brought to the band and we all contribute to the end result. Then, before we go anywhere near a studio, we play it together at gigs to see what people's reactions are and to make sure we're happy before we record it."

"One of the things we like to do is have multiple melodies interacting with each other with maybe three melody lines in a song," adds David. "For example on 'Guessing Games' on the EP, you have brass, male vocals and female vocals and they all interweave. I think that's what brings originality to a song if it's done well."

Going by the positive reaction and resultant sales of their new EP 'Armour/Guessing Games', it appears that this strategy is working. Confirms Andrew, "The EP's gone down really well. We've yet to get our sales figures from iTunes but, in terms of hard copies, we're struggling to manufacture them quickly enough. The idea behind the EP, from a business and marketing perspective, is to whet our fans' appetites for more Band_C material. We hadn't released anything since 2009's 'Cardboard Box' so we wanted to give our fan base something new to listen to and to gain some momentum for ourselves as well. This will lead into a couple of EPs that might turn into an album in the near future - it depends on how many songs we end up writing."

Andrew ends by giving a hint of what the immediate future might hold for Band_C. "This year we've been pushing it more than we ever have done," he advises. "We're at the age where, if it's going to happen, it's got to happen now. It's now or never, really. We'd love to get signed and make it our profession. We've got a real passion to be Christian role models in the music industry and to sing songs that are morally sound and also interesting to listen to. Whether or not we get there - well, that's in God's hands."