Andy Butcher finds out what has persuaded 60s veteran BARRY MCGUIRE to dust off some of the old favourites. 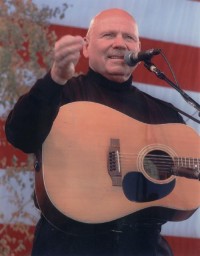 Revivalists of two distinct kinds -- from the floral, jingle-jangle corner of the sixties; and the rather more sober-suited cloisters of the church ~ found an unlikely silver lining in the cloud of war that hung over the Middle East.

Evangelical book publishers fell over each other in the rush to pump out their end-times interpretation of events, with Saddam Hussein cast as the modern Nebuchadnezzar in the cable news version of the book of Daniel.

And with talk of "another Vietnam" casting minds back 20-plus years the peace-and-love merchants recycling psychedelia rubbed their hands and dusted off the old record files. Enter the profits of doom.

So it was that, 26 years after he first hit the top of the charts as the herald of young people's search for real meaning in life, Barry McGuire found his Doomsday warning "Eve of Destruction" filling the airwaves once more.

Someone whose career has slid quietly off the sales chart over the last ten years -- which saw only a couple of recordings - could be forgiven for welcoming the kind of interest and, ahem, financial returns, such nostalgia may bring.

Yet McGuire -- still full of youthful enthusiasm, but whose frame at 55 is somewhat fuller than when he bared it as the first male lead in the then-scandalous Hair! Doesn't have much time for the falsely fond remembrances.

Taking time out during a brief TV-recording visit to Holland -- he's not actually been in England for six years or so - he admits to having little time for the rose-tinted look back at yesterday.

"For 'halcyon" days read 'hallucinogenic' he observes. "They should go talk to the children of the sixties, the kids who had flower children for parents, and ask them how they feel about having grown up in broken relationships."

He has been told that "he" appears in Oliver Stone's new movie, The Doors but, although he counted the late Jim Morrison among his friends during the chart years -- along with the likes of Jams Joplin, Cass Elliott, and The Byrds' Roger McGuinn - he won't be going to see it.

"I can do without all that again," he explains in the unmistakeable l-o-w voice that sounds like a bag of gravel and led the New Christie Minstrels to a string of successes before a solo career.

So why, with such a let sleeping-dogs-slumber attitude, is he breaking a personal vow of some two decades and singing in public again some of those syrupy Radio 2 favourites, like "Three Wheels On My Wagon", "Green Green", and "The Last Farewell"? Songs he confesses baldly are "just dumb", and that he has already sung more times than many kids have had hot dinners?

For that very reason. McGuire has come out of several years' retirement, sold up his home in New Zealand and returned to his native California to pick up on a new focus of concern: the poor and needy children of the world.

Get the genial, still-bearded minstrel on a stage with a couple of hundred kids, in front of the proud parents who remember the golden oldies first time round, and you have the undivided attention of a concert hall full of mums and dads. And, by the time the lights go up, several thousand dollars worth of sponsorship money to pay for feeding, health and education programmes for children in developing parts of the world, thank you very much.