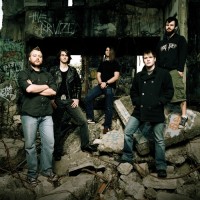 If your specially-reinforced ears are inclined to the sound of the mosh pit yet have written off Christian bands as musical wimps, Atlanta-based Becoming The Archetype will be a sonic revelation. Here is a band who, in the words of Metal Hammer, produce "an onslaught of deep and dirty death metal growls over experimental noise that samples elements of modern metalcore" while Kerrang magazine called the band's 'Terminate Damnation' album succinctly, if crudely, "shit hot". So who are these purveyors of enthralling noise? The band, consisting of Jon Star (guitar), Jason Wisdom (bass, vocals), Sean Cunningham (guitar), Seth Hecox (guitar, keys) and Brent Duckett (drums), formed in the summer of 1999. They were originally called The Remnant. In 2005 Wisdom explained their name change. "We used to be called The Remnant and when we got signed with Solid State we had to change our name because of legal reasons with the band The Remnants and other bands. The name was my idea. It was a concept of just something I wanted to have, to portray something in a unique way so that we wouldn't have the same name conflict again. Becoming The Archetype is about becoming like Christ and he is the ultimate model of what we are meant to be."

Shawn Cunningham explained how the signing to Seattle's legendary Tooth & Nail/Solid State company came about. "We played Cornerstone last year on the new band showcase and it was kind of neat. Most of us were pretty sick and our singer Jason had laryngitis so all we did was an instrumental set. Ryan Clark (the singer with Demon Hunter) and the Dunn Brothers saw us and said they liked it and got our contact information. They then called us and mentioned they may be interested in signing us. They wanted to hear some new stuff; they heard it and they liked it."

Seth Hecox told Cross Rhythms' Greg Sammons about the theme behind the band's stunning Solid State debut. He said, "The whole album is themed around the name terminate damnation - Jason, the bassist and vocalist, wrote most of the lyrics and mostly what he wrote about was how we see the world: there's a lot of death, there's a lot of pain, there's a lot of despair. We wrote about those things and we tried to be honest about the stuff that we saw. We saw a lot of people hurting, a lot of people were going through tragic times and we wrote about that. In general, the album is about overcoming those troubling experiences and painful moments by victory in Jesus Christ. You got the world that's very bleak and a lot of trouble going on which everyone experiences but then we talk about terminating damnation, turning the evil that you experience and gaining victory over that."

Becoming The Archetype have little time for the theologically shallow outpourings of much of the CCM industry. Commented Seth, "CCM has all these pop songs and they're in major keys and they're music's all happy. We feel that if we're going to tell people how the world is and how we see it, the music needs to fit that. We see the world as a very dark place and we let the music fit the passion that we have, the anger that we have towards things and the anger that other people feel towards things, the dark sinister feeling that the world will give you." 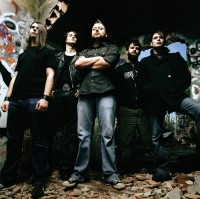 The music on 'Terminate Damnation' is a long way from the stereotyped noise-for-noise-sake of some hardcore. It is full of variety, boasting incisive hooks, insidious grooves and an 11-minute epic "Elegy" which boasts acoustic interludes, eerie atmospherics and guitar harmonies. One of the many outstanding tracks on 'Terminate Damnation' is "Ex Nihilo". Commented Seth, "The song 'Ex Nihilo' is about God creating something out of nothing. If you have a person like .... in the song 'Into Oblivion' we talk about a friend who has fallen into despair, chaos and maybe depression and you go through some battles and the battle keeps going on. 'Ex Nihilo' is about the only rescue from that despair being God creating something new out of nothing. When I was in despair and depression I was nothing and God came and did like he did in Genesis 1 when he created something out of nothing. He created hope and joy and peace in my life where there was no hope or joy or peace, so he gave me victory when I didn't have any victory on my own - that's what 'Ex Nilho' is about - God bringing something good out of that had nothing good."

Seth said that sustaining musical variety in the hard music template was an essential for the band. "All five of us in the band have taken music theory classes, whether it was in high school or college, and we're really bored you know with most of the music that's out there as far a pop music - like you said, you do know what to expect and that's never very interesting when you know what's coming up next. You want to be surprised occasionally so we try to vary it up and throw in some death metal, some thrash sections, some acoustic bits. But we keep it fairly tight, we try to keep it fresh and transition in to other riffs and not stay in one thing too long because we know how that is, listening to other bands' CDs. We spend hours arguing within our band as to which riff goes after another riff and then how to transition that and how many times to play it. We put so much care and thought and energy into our songs that it almost gets tiring after awhile after writing a whole song because it's taken all the energy and thought out of us!"

Jon Star has now left the band, wanting to devote more time to his marriage. His replacement has already slotted into the band's hectic touring schedule prior to the release of Becoming The Archetype's new album. It promises to be another dazzling sonic feast.