Being Joan: A Scottish singer songwriter who's clocked up 15 years of prison ministry 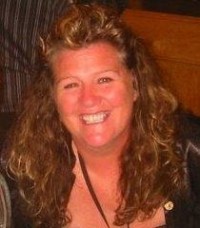 Cross Rhythms music editor Tony Cummings recently named "Come To Set Me Free" by Scottish singer/songwriter Being Joan one of the best tracks of the year. When one considers that the track emanates from a zero budget album by a 49 years old South Lanarkshire singer/songwriter who's played most of her gigs in Scottish prisons the enormity of Being Joan's accomplishments begin to hit home. After years of sacrificial music ministry it seems the music world - both Christian and non-Christian - is finally waking up to the talents of Joan Piacentini. She has made an appearance at Glasgow's world famous Celtic Connections, played support for thebandwithnoname at the Free In The Park event at her home town of Strathaven and has been recently interviewed on Premier and Cross Rhythms radio. Yet it is to the inmates of Scottish prisons that this most gifted singer, songwriter and record producer continues to commit most of her time.

I catch up with Being Joan in Strathaven and she begins by letting me into the secret of her quirky stage name. "I used to perform under the name of Urban Disciple," she explains. "I was never really comfortable with it so I tried to come up with a better name. I was singing at a drop-in event at a church in Glasgow and someone shouted out in true Glasgow style 'just be yourself, hen!' The name Being Joan came from that and I'm really happy with it because it reflects the fact that I am exactly who I am in life. Also, my surname's a bit unpronounceable!"

Whilst 'Why So High' is very much a homespun affair with Joan writing, recording and singing everything on the album as well as releasing, packaging and distributing it via her own label, the quality of her latest release cannot be argued with. With Joan's powerful vocals set to a slick array of electronic samples, songs such as "Come To Set Me Free" and "Sticks 'N' Stones" recently aired on Cross Rhythms' Rimmerama show. I ask how she ended up becoming a recording artist after all these years. "A couple of years ago I came down with flu and ended up off work for six weeks," Joan explains. "During that time, I sat down and wrote some songs on a Playstation 2 using some music software. Over a two week period I had written a full album which became 'Here At Last'. I couldn't believe how easy it all came together and I felt that God was really in it.

"I sent copies of the first album out to churches offering my services as an evangelist and a singer but not one church got back to me," confides Joan. "At the time, I felt really demoralised but I've since realised that my music and its message is more for the folks out there in the world and not for Christians and churches. During that period, God had put two roads in front of me in a vision. One of the roads was training to become a paramedic - something that I really wanted to do - but then another road appeared which was singing, evangelising and following God. As I looked at that road, the other one just dimmed away and disappeared. I kept working away for another year and started to write my second album. The process was basically putting down the instrumentation myself using samples before going to a local studio to record my vocals."

With a combination of hard-hitting lyrics that comment on the sinful nature of our fallen world and an evangelical edge that points unreservedly to the one true God as the answer, Joan is somewhat surprised by how her material has been received in the secular world. "I think more non-Christians like it than Christians for some reason," she suggests. "I'm close friends with prophet and speaker Catherine Brown of Gatekeepers Global Ministries and she and lots of other people have prayed over me about releasing what God's put in me. Everyone who has prayed over me has said that this is my time now and all I know is that I'm doing the same as I've done before but God is opening miraculous doors to prisons that Christians couldn't get into before. As long as I wait patiently on him, I know that he'll use me in a big way."

One particular song that has had a big impact is the current album's infectious opener "Come To Set Me Free" which charts the songwriter's journey from a chequered and rebellious past to salvation through Christ. "I wish I could write hundreds of songs like that," admits Joan. "I go into prisons and I love to talk - I'm a bit of a blether - but one of my worries was always that I would digress from the message of Christ and then lose people. 'Come To Set Me Free' is great because I don't really need to tell anyone anything else about myself as it's all there in that song. It's basically my testimony." 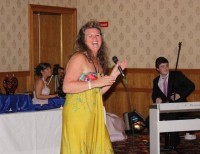 I ask Joan to expand on how she came to know Jesus as Saviour. "Before I was a Christian, I used to get swept along with the crowd," she recalls. "I've tasted drugs and drink and partying and all the world has to offer but it's so empty. There was always a lust for more - if you went partying, the party came to an end. If you drank or took drugs, they always wore off and it left me with this gnawing hunger and a desire to do it again."

Joan continues, "When I was about 29, I was faced with a lot of difficult circumstances and I basically found my old Bible one night. I started to read it and I remembered how, as a child, I used to speak to God all the time. Although my parents never went to church, I went along to Sunday school and heard the Bible stories. I used to talk to God because things weren't always easy at home and I would share my worries with him as a kid. Then, that night when I found my Bible, I asked God what had happened to him because it seemed like he'd just disappeared out of my life. I realised though that, when I was in my teens, I'd just shut the door on him. Reading my Bible that night for the first time in so many years, I recognised that I'd forgotten all about God and this revelation hit me that he was real. I prayed that night for God to remember me and help me and that started me on a path that I'm still on today."

That path has seen Joan visit numerous Scottish prisons to sing and speak about the good news of Jesus and I wonder how she became involved in this particularly challenging area of ministry. "There was a lovely couple in Strathaven called Duncan and Lorraine Ferguson and they had been working for Prison Fellowship for about 20 years," explains Joan. "They were going into a prison called Dungavel, on the outskirts of Strathaven, and they asked me to come in and sing at that prison. I went in and sang a couple of songs and I was then asked to go in on a regular basis. I've been going into prisons for over 15 years now."

Whilst the world can too readily write off society's offenders, Joan sees things differently. "When I went into a prison for the first time, I didn't know what to expect but, as I looked out on all these guys, I didn't see angry, violent, horrible people - I just saw broken people and broken lives. They were just so grateful that someone had taken the time to come and speak to them."

Joan acknowledges the part that she plays in ministering to prisoners is a small cog in a much bigger wheel and recognises the perseverance of Christians who regularly visit inmates. "There are some wonderful folks who go out into the field and faithfully go to the prisons week after week sowing into these guys. It seems like nothing's happening and they may not see any fruit but they keep going. I have the privilege of going in and bringing in the harvest from the seeds that these amazing people have sown and watered over the years. When God uses me like that, all I feel is humility and it is the most incredible thing."

In addition to her continued prison ministry work and a finance-permitting invitation to take part in outreach events and church planting in Kenya through Gatekeepers Global Ministries, Joan is keen to continue writing and recording music. "I would love to get some interest from record labels and have some musicians to record and perform live with," she admits. "I really want this gift to grow and I feel that I'm at a place in my music ministry where I've got to move on to the next stage. I don't want to do this just to entertain people. I want my music to do more than that. I know the power that God has and how he can use me. These are exciting times!"