Bell Jar: The Greenbelt favourites who developed from Eden Burning 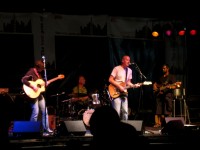 During the first part of the '90s the most popular Christian band in Britain, save for U2, were an unlikely group of friends known as Eden Burning. Starting off with a folky, rock'n'reel sound and gradually transforming themselves into grunge-influenced rockers their constant touring and stream of recordings brought them, if not fame and fortune, at least the clamorous support of young British church goers. When the band called it a day in 1996 Eden Burning were firm favourites at Greenbelt Festival (which in 1999 had relocated to the band's hometown of Cheltenham). For a year or two the band's lead singer and composer Paul Northup kept his musical hand in by making low key appearances at Greenbelt helped out by another ex-EB member, guitarist Charlotte Ayrton. But then Paul contacted another musician and set the wheels in motion for the formation of Bell Jar (the band name coming from a novel by Sylvia Plath).

Remembered Paul, "In 1998 I plucked up the courage to write to Duncan Forrester, who I admired. He was the drummer of a band called This Picture (a mainstream art rock outfit from Cheltenham who had a single on Rough Trade followed by two albums on Dedicated/RCA but never quite made the national breakthrough). I was starting to write songs again, but I wanted to do something low key with people in Cheltenham. In Autumn 1998 we got together with Charlotte, our guitar player from Eden Burning, my long term best friend Steve (Whitfield) who played keys and Mark (Wijesinghe) was our bass player. We had all been part of youth groups in Cheltenham and it was nice to be more experimental. As people had other commitments it was more therapy or something people might like."

The new songs flowing from Paul's creative pen became the basis for Bell Jar's independent album 'Secret Volcanoes'. Said Paul, "We have fond memories of that. We did it with our good friend Dave Pick (the producer, recording engineer and owner of FFG studios who had worked on all Eden Burning's output). Duncan, our drummer, lived in the Forest of Dean so we would rehearse and write all the songs together there. We went into the studio about a year after we went to musical festivals and recorded it with Dave."

There is one fine song on 'Secret Volcanoes', "Virtual Grace" which is still part of Bell jar's live set today. Explained Paul, "I wrote 'Virtual Grace' in 1998. I was beginning to read some theology as I was considering a post grad degree. I was concerned about the shift towards virtual communities, as there were various questions about whether you could have a virtual church or communion. This song is my response, that I felt that it wouldn't work because there is something very bodily about the need to take bread and wine, but also to touch others physically and share the peace. This is still a firm favourite."

In their early days Bell Jar did quite a lot of gigs. "Our good friend JJ in London organised various gigs for The Vigilantes Of Love, so we did take part in various support slots when they were in the UK. We really enjoyed them because they are very low pressure but you get to play with great musicians and on fairly good bills."

Bell Jar's next recording was the EP 'Flying Low' released in 2000. Explained Paul, "It was a very quick EP we made because Greenbelt asked us to do a gig. We put together four songs that were works in progress. These later formed part of the second album called 'On The Outside Looking In'."

2001's 'On The Outside Looking In' was, as Paul admitted, "a little bit darker." He mused, "It contained one song called 'It Hurts', which acknowledges that being a Christian isn't a passport to a perfect life. Sometimes you can be really hurt by the experiences. There is another song called 'Cage The Bird Up' which we still play today, and it's a very gospel type track, basically saying that wherever you are God has already been."

As the years rolled on the band gigged less and less -though they usually managed to make an appearance at Greenbelt. In 2003 Bell Jar recorded the 'Nightlight' album, as always with Dave Pick. The opening track "Peter Pan" was about growing old, a process Bell Jar was very much aware of. Paul commented, "We gigged less and less. Between us, we had a lot of children and most of the men managed the childcare in the families. Most of the headspace we need to be creative was in short supply!"

After a few years of being in a state of suspended animation Bell Jar finally got back into Dave Pick's Gloucestershire studio in the summer of 2009. The resulting 'The Follow The Road EP' demonstrated that the band, with their eclectic blend of rock and Americana, folk and jazz, had lost none of their creative edge. One of the songs "Things You Love The Most" was influenced by the five years in the noughties that Paul spent at Greenbelt working as a staff member. He commented, "I am passionate about Greenbelt and have been a lover of the event since my teens. But Greenbelt can chew you up and spit you out. I think certain personality types engage with projects in different ways; my type is definitely an all or nothing approach. That could be seen as the Christian calling to love something so much that you lose sight of yourself. But I think you have to give yourself to it and see what comes out the other side."

What Paul described as "a band favourite", "Follow The Road" is another of the EP's standouts. The track contains the truly stunning sound of a Charlotte guitar solo - played backwards! Laughed Paul, "Dave just took Charlotte's solo and completely reversed it! We really loved how it turned out." The lyric too was equally attention-grabbing. Continued Paul, "When you become a Christian you begin a journey and sometimes you really struggle to know where the road is leading but you just have to keep following. The lyrics aren't a great deal developed to be honest. I remember hearing Bart Campolo speak. He told a story about a man who got lost in a storm out on a ranch. Every time the lightning struck, he could see where the farmhouse was. He had to hope that he could keep going in the right direction between the lightning strikes, and eventually he got home. The song is a bit like that, if you keep on going then the Holy Spirit will equip you, as long as you can stay faithful."

Another song, "Somewhere Else", is equally thought provoking. "'Somewhere Else' was written straight off a theological idea that I really like. In a world where we think everything is down to us, we sometimes just need to stop and remember that God is working in ways that we have no idea about. It's good to remember that there are incredible things happening that we will only understand when we meet him."

I finished our chat by asking Paul when Bell Jar's small but committed clique of fans would next get a new recording. "Well, all the children are growing up and we enjoy being in the studio and have the songs ready. So there is no real reason why we can't record it by next Greenbelt, but I don't want to commit to that. We have just recorded a track for a tribute album (can't tell you who it's for as it is a secret just now) and that reignited our enthusiasm for getting in there and recording. So we are looking to have our next album ready and do a Greenbelt gig next year."

Interesting to read a bit about 'Follow The Road' and always interesting to read about Paul Northup - an unsung hero of Contemporary Christian Music...although I think he might feel uncomfortable with any 'CCM' connotations. He's an artist, who also happens to be a Christian!