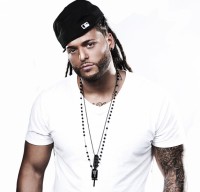 When attempting to grapple with the eclectic style heard on 'The Break Up' album by Benjah one reviewer suggested "a hip-hop artist who incorporates elements of rap, reggae and rock into his beats." Best known as a Grammy nominated and Dove Award winning songwriter and producer, Benjamin 'Benjah' Thom has worked with acts like Lecrae and Tedashii and was once one of the original behind-the-scenes members of Group 1 Crew. Broadcaster Mike Rimmer caught up with the multi-talented Benjah at his home in Orlando, Florida. The artist began by talking about his early years. "I was raised in a Christian family so that played a major role in my salvation. I was raised in church from Day One but I don't think I was truly saved 'til I was maybe 16 years old. I had a pretty rebellious youth, just trying to do my own thing, rebelling from righteousness and running towards my flesh and the desires that I wanted at the time. But the Lord ultimately drew me in and he won me over with his grace."

Christian musicians were a key factor in drawing him to Christ. He said, "I started hanging out with this Christian band - two of them are now my brothers-in-law; they married my two sisters. They were at least four or five years older than me so I really looked up to them. I guess they were the first real Christian musicians I really got around, that I thought I could vibe with. And just seeing more mature men and believers doing what I had a passion to do just really inspired me; like ok, I can do this. I mean, I can do it for the Lord. It was getting around them."

At college Benji played football for a season until a bad car accident put paid to his promising sporting career. After that there was only one option. "At that point I knew exactly what I was going to do because football and music had always been my two loves in my life. So once football was done I knew it was time to pursue music. There's a school called Full Sail here in Orlando, it's one of the most renowned schools in the world for recording engineering and at age 18 I had no idea what I wanted to do in the industry: I just knew I wanted to be in it and wanted to be heavily involved. So the best option at that time was to go to Full Sail and get a degree in recording engineering and that's what I did. That's how I first got into engineering."

By 2006 Benjah had joined Blanca Reyes, Pablo Villatoro and Manwell Reyes in Group 1 Crew. Benjah explained, "They had started recording but back then I was still real behind the scenes, doing a lot of production and engineering and really wasn't voicing yet at that time." Benjah wrote and produced five songs for the team's 'Group 1 Crew' album debut for Word/Warner Bros which won a Dove Award. He also worked with many other artists including mainstream neo-soul singer Angie Stone. 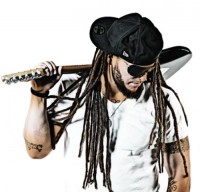 Benjah's first album as an artist was 2009's 'Filtered'. The project was the manifestation of years of professional music training coupled with spiritual life lessons learned, many of them from personal tragedies and triumphs. 'Filtered' featured high profile collaborations with Lecrae, Sho Baraka and Dillavou. The following year Benjah & Dillavou recorded an album together. 'Lov'd One' had a distinctive JA vibe to it. Explained Benjah, "Anytime I work with Dillavou we're on like a reggae vibe 'cos he's a reggae artist and I'm more a hip-hop, soul, rock artist."

Benjah produced two tracks for the massive hip-hop hit 'Rehab' by Lecrae and also produced and was featured on Tedashii's 'Blacklight' album. Now the studio whiz's solo album 'The Break Up' puts the spotlight on Benjah though it does feature guest appearances from Dillavou and Rachael Lampa. The one-time CCM hitmaker is featured on the song "Not Alone". Said Benjah, "I wrote it over a year ago when a lot of tragic things were going on: earthquakes on Haiti and tsunamis, and back many years ago 9/11 and New York. Not only that, but the economy. . . I hear all these stories about people losing their jobs and this and that. So really all this kind of boiled up and the sadness and frustration from that. But at the end of the day I want everybody in the world to understand that no matter what they're going through and no matter who has failed them humanly, God will never fail you and he's always there, no matter what you're going through. You know, you're not alone. No matter what. He's a prayer away and you can lean on him for everything and he will comfort you."

Benjah spoke about what he hoped 'The Break Up' will communicate to listeners. "I want to communicate who I am and I'm a very diverse mix type vibe so I want to take you on a journey musically and never let you get tired, like you're hearing the same sound too much. 'The Break Up' is written as a metaphor so not only can our Christian fans enjoy the project but also at least half the songs are metaphorically written from a relationship standpoint that's going bad and time to be done and break up. From a spiritual sense it's deeper than that and who I'm really breaking up with is myself, my sin, my sinful nature is who I'm breaking up with. I would say the overarching theme of the record is to acknowledge that there is a battle and who you're battling is really yourself and your sin. You're born with a sinful nature that is naturally drawn towards destruction and will lead you to destruction if you let it but I'm trying to stand up and fight it."