Of the 25,000+ people who went to Wiston House, West Sussex on 28th and 29th May, five campers here report on what they saw, heard and experienced. 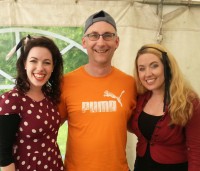 Rob Thompson with Daughters Of Davis

ROB THOMPSON
I'm Cross Rhythms' accountant and last year I worked at BCDO. But this year I bought a ticket. It really is a big day out (well, two actually) and I wanted in. I even bought a tent so I could join in the party.

From small intimate stage settings through to the full on Main Stage, with bass resonating through your body, engulfed in the rhythmic sound of soulful music and much more, the BCDO gave a dazzling variety of quality acts.

The event had a good entertaining spirit about it with a focus on music but intertwined with an occasional low-key and short spiritual story behind the writing of a track or experience of an artist. There's a lot on offer and you need to be in four places at once to hear everything. Rather than making the age-old mistake of trying to hear as much as possible, I took a more chilled approach and scheduled in a few things on the programme, leaving time for catching some rays (once we'd recovered from Friday's rain showers), tea drinking (one of my particular gifts) and soaking up the joyful atmosphere. 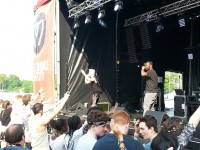 On Saturday, I wandered over to see the Daughters Of Davis perform at an intimate gathering on the CSW Stage. A few people were sitting on hay bales set up in front of the stage. There's a lovely spirit about these two girls and their "British Soul" is a gem of a song. I strolled over to the Illuminate Stage where I caught a couple of songs from that perpetual motion machine Chip Kendall and his band.

TobyMac was a definite highlight. As Toby said from the stage, his music is a bowl of musical stew, with a mix of soul, hip-hop, a small pinch of reggae and a large dollop of funk. There's so much quality and variety in his music that he gripped and held the massive crowd with ease.

This was followed by the Jesus Culture band with the truly wonderful Kim Walker-Smith. She has a powerful, soulful voice and the passion in her really came through. The music encouraged us to encounter the presence of God and words were displayed on the main screens to help many of the thousands in the crowd to join in with the singing and worship.

After Verra Cruz, I wandered over to the other side of the venue, behind the elegant stately home to the Tearfund Tea Tent. This was a relaxed gathering. There were tables and chairs on the lawn and a small stage set up. Those West Country surfers The Grenaways were playing some of their folk tunes. I grabbed a coffee and enjoyed chilling out, listening and watching. The crowd were obviously getting into it, clapping along and even contributing dodgy barn dance moves.

I've been to quite a few Christian events down the years. But as my mate Tony Cummings asserts, this one is special.