Big Church Day Out 2016: We talk to the Festival organiser Tim Jupp 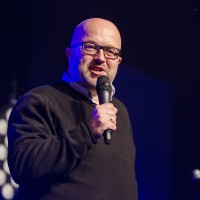 Tony: Was last year's Big Church Day Out the best ever?

Tim: Without a doubt. We were blown away. The whole event went from one field to another field and created loads more space. I thought it would take three years to fill that space, and it was full last year. You couldn't move: the whole place was full. We were about 22,000. Right now we're looking at our capacity, how many more people we can fit in. It comes down simply to how many cars you can get in. Hopefully we'll be 25,000 in 2016 - 28th and 29th of May, always that last, Bank Holiday weekend in May.

Tony: And I understand there's going to be more stages.

Tim: Yes, one thing that's exciting is we've got two more areas - we were three stages; we're five now. Part of that is we want to give space for more up-and-coming English songwriters, worship leaders, bands. We also wanted everything to remain busy, so we didn't want to disperse the crowd in too many directions; but there's so many people at the event now we felt we could put one or two other spaces for other things.

I love it when the Americans come, and other international artists. They're used to playing in those big spaces and they can teach us a lot. But also we want to encourage what's going on in the UK and create new space for that. We're going to try and do that at the Big Church Day Out. As time goes on, in the next three years, you'll see us developing a whole lot more events around the UK - not just tours like the Big Church Night In: lots of smaller things, maybe working in bars and clubs, small churches.

Tony: I heard a half-rumour BCDO might be getting involved in a bit in distribution.

Tim: Because things have changed a lot in the Christian music business side of things - a big part of that is things have gone digital - a lot of the result is that people making records are doing that on their own. That's something that, coming from Delirious?, I really believe in. I want to cheer people on and help them being independent. Being independent for us meant an awful lot of responsibility and work. We ended up with a big office with a lot of staff servicing what we do. A lot of that was funded because we would sell a lot of records; that's not the case for people now. Nonetheless, being on your own, being independent, you still need to do certain things - you need publishing, you need distribution, you need help doing the live things. What we want to do is come alongside these people who are independent, give them the support by providing some services, seeing how we can grow the live platforms. We've got these Big Church Night In tours right down to smaller tours, giving more spaces for people to play live.

Tony: And part of that will be looking at distributing those independent releases?

Tim: Part of that. People can independently put their stuff on iTunes, Spotify, those things - physical sales are a much smaller part - so not everybody needs help with that. But there's things outside of the UK, and people certainly need help in those areas, when it comes to connecting in America as they develop those things. Independence is good because you can own your own copyrights, you can shape what God's given you; the downside can be the isolation. We're trying to create a space where we can bring a lot of these people together. It can be a creative space where they can learn from each other, whether that's how to record, be better at playing live, and encourage each other and stand with each other. We're definitely being intentional in trying to see that grow.

Tony: I believe we are seeing the beginning of worldwide revival, and it would seem to me that Big Church Day Out is playing a part in that.

Tim: If you look back over the years, many of the moves of God - things like the Salvation Army, the Methodist movement - they've all been accompanied by music. That's the wonderful thing: when you see the Holy Spirit move on people, you get that passion for Jesus - we want to worship him. Music has a great power to gather people. We see that happening. Are we spearheading something? I don't know, but I'd like to think that we help create a space for what God is doing at this time. The things that we feel and see that God is doing, there's a great conversation on unity going on in the Church, and that's getting louder. I love it with Big Church Day Out becoming incredibly evangelistic, people just want to bring their friends. That happened without us saying: if you create something that's fantastic, they just want to bring their friends. Revival in terms of presence of God touching people's lives, I hope the Big Church Day Out gives plenty of space for that as well.

Tony: So it goes without saying that you're stoked about BCDO 2016.

Tim: I'd like to say that I'm excited about what we've seen happen through the Big Church Day Out. I love it if people come; I'd love it if twice as many came. I think there's something special there that can be a great place to bring your friends: just bring them and we'll create the space for it. Some of the music we're bringing is the best of what you're ever going to get in the whole Christian world. I don't want people to miss out.

Will you be taking the group to the USA in the near future?