Big Church Day Out North: A journo's seven hours at an unmissable event

Music journalists are privileged people. They get most of their recorded music for free and complimentary tickets are usually available for any gig or festival that takes their fancy. Having been convinced that the Big Church Day Out (both North and South) now surpasses any gig or event in the UK, I recently said to a colleague that I was willing to attend BCDO even if I had to pay. It is, in my view, simply the best Christian music ministry event ever organised. Not only does it give me and thousands more Christian music enthusiasts a chance to catch live many of the world's most talented musicians, it also carries with it a sense of God's presence like no other event I've ever attended. This year meant that, for various work-a-day reasons, I was only able to attend the event for one day, and then only for seven hours. Next year, though, I've resolved to catch the whole BCDO experience, both Friday and Saturday. . . and to buy a ticket. Here is a brief report of what I saw and heard at Big Church Day Out North 2018.

12:39pm - I arrive at Big Church Day Out North, which is under something of a cloud. The Premier website has brought me some disappointing news. "Organisers of the Big Church Day Out have suggested people who bought tickets to the festival this year may want to help clear a six-figure budget deficit. Speaking after the first leg of the event at Wiston House in West Sussex during the late May bank holiday weekend, chief executive officer Tim Jupp announced a loss of Â£150,000." Having spent the morning doing a couple of interviews with main stage artists at a hotel at Manchester airport, I'd arrived hoping that a) the threatening rain would hold off, and b) the attendance would be three or four thousand up on last year's 12 thousand. As I walk towards main stage, the drizzle starts and my first sight of the crowd leaves me with the opinion that there's no discernible increase in numbers. However, the moment I begin to listen to the words being sung from main stage by Lucy Grimble, the relevance of her song bites through. "Help me to dance on my disappointment!" she sings. As I sit by the food concession van eating falafels, a young lady close by is clearly taking these words to heart, and as she dances in the drizzle I feel deeply rewarded to be at such an invigorating, God-honouring event.

12:59pm - A singer I've never heard of before, called Bean Baker, is in the middle of his set at the Arkyard Sessions, performed from inside a converted Airstream Caravelle. He's an excellent acoustic songsmith and I particularly like the way he suddenly doubles up the tempo and word count in one of his songs.

1:15pm - I'm talking to John Nicholas, whose set at the Arkyard Sessions I missed. Having seen him in concert recently at the Speak, Brother UK tour, I'm convinced John is one of the best songsmiths on the whole UK scene, and I'm thrilled to learn that in July John will be releasing his long awaited EP. This charming Welshman is a master of the loop pedal, every bit as good as Ed Sheeran, and I tell him I hope that one day John's audiences will grow as more people recognise his huge talent.

1:59pm - I'm impressed by the gospel choir Big Sing, who have attracted a big crowd to the outside stage by the Tea Tent. My programme tells me they were winners of the BBC Gospel Choir Of The Year for 2017, and certainly their beautiful harmonies and the joy they exude are hitting all the buttons with the Tearfund crowd luxuriating in the sun which has come out. Big Sing's only misjudgment is closing their set with a slow song, which, as any seasoned music practitioner would tell you, seldom works.

2:19pm - At the Tea Tent, the Americana/alternative pop duo Drakeford come up and place in my hands an early copy of their new album 'The Venture'. As their CD debut was something of a minor masterpiece, I'm truly thrilled that Cross Rhythms are getting in at the ground floor with this one.

2:30pm - I sit in the Tearfund Tea Tent, eating a scone with cream and jam (a West Country boy's favourite) and gazing at the dramatic Tearfund poster proclaiming "We won't stop until poverty stops". Maybe I should become a Tearfund financial supporter and while I'm about it, join the Big Church Buddies, as the cost of a monthly donation would be little more than the cost of my scone.

4:05pm - Lindz West must surely be what they used to call James Brown, "the hardest working man in show biz." This super fit ball of energy covers every bit of the main stage and the other members of LZ7 don't even try to keep up with him. I really enjoy the singing and rapping of new LZ7 member Mary Kate (this is, we learn, Mary's first BCDO), but it's Lindz, dressed in sparkling all white, who keeps the throng, save for the deck-chaired oldies at the back, pumped up and dancing. Lindz stops his EDM gymnastics session long enough to speak about a vision Andy Hawthorne has to create a prayer movement for the young people in our schools. Then it's back to the thunderous rhythms, crammed full with memorable couplets ("The past is my history/My future's my destiny") and equally memorable song introductions ("You were designed before you popped out of your mum"). By the time they get to the song "Give Me Something That I Can Use", and their most recent Spotify chart maker "Legend", it's clear that Lindz and his crew have lost none of their ability to excite a crowd of young people like no other act I can think of.

4:55pm - I'm outside the elegant Capesthorne Hall. I've never had a particular taste for stately homes, but I have to admit that this place, set in such sumptuous grounds, is beautiful. I've just come out of an interview in the beautiful house with modern rock revisionists, For King & Country, who told me as Maxine was setting up the hard disk recorder that since they were formed four years ago they've done over 800 interviews. A fact which would cause even the most grizzled of journalists like me to feel a little nervous.

5:01pm - I'm standing by the portacabin loos when I hear something which takes me aback. It's Graham Kendrick singing "Shine Jesus Shine". Now I know the elder statesman of modern worship is at this event, but my programme tells me he's scheduled to be fronting a Songs Of Praise filming for BBC TV in the Tearfund Tea Tent. That's a good quarter mile from the main stage, on which according to my reading of the programme Housefires are due to appear. Anyway, I'll find out what's happening mainstage soon enough. . . 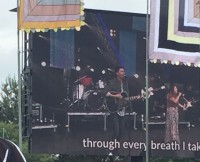 5:15pm - I'm sat in my deck chair listening to Housefires, waiting for them to start their "Good Good Father" classic, but finding myself drawn deep, deep into worship. It's as the lady in the collective sings All Sons & Daughters' beautiful "Great Are You Lord" that I stop being the journalist striving to do the impossible and review worship, and become one of the thousands around me worshipping God. Those telling lyrics ring out across main stage and out, out to the very back of the crowd 200 metres away. "It's your breath in our lungs/So we pour out our praise/We pour out our praise/It's your breath in our lungs/So we pour out our praise to you only."

6:04pm - It's a surreal game that the trusty BCDO compares Pete Greig and Gemma Hunt are playing but parties like this one are made for zany fun. They are catapulting bars of Fair Trade chocolate into the crowd, and although the gloomy Health & Safety man in me momentarily imagines newspaper headlines of "Girl blinded by chocolate bar at Christian festival", I overcome such reservations, particularly when I see one or two teenagers doing spectacular dives to catch the flying confectionary.

6:08pm - A chap comes on to main stage to show off his impressive football skills, beginning by balancing his baseball cap with the peak down on the top of his head. He then proceeds to a ball, and sure enough, shows more football trickery than you'd expect from the entire Real Madrid side. An interview afterwards tells the throng that he's using his skills to publicise the work of the Mercy Ships ministry. More power to him.

6:15pm - I'm still waiting for For King & Country to appear and I find myself gazing more and more at the back of a head of a rather overweight gentleman, who has the words "Fat Face" stitched on the back of his baseball cap. A few minutes later, three giant beach balls, five feet across, are thrown out into the crowd in a race to see which group of festival goers could push it all the way back to the sound desk and beyond and then return it to main stage. Two of the balls I quickly lose sight of, so you can imagine my surprise and amusement when one of these giant spheres suddenly emerges from the side and hits Mr Fat Face clearly on his. . . er. . . face.

6:18pm - In view of my ponderings earlier in the day about the financial viability of BCDO, I am thrilled to see on screen and announced from the main stage that the next Big Church Day Out North would take place on the 31st May and the 1st June 2019. This event MUST continue, and next year I will be exhorting more of my friends to attend. 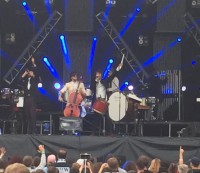 7:11pm - Just when I think For King & Country's stage performance can't get any more eye-catching with their drum solos, flugal horns and weird instruments, the technicians use the first sign of diminishing light to hit the light show buttons, and our eyes are quickly dazzled by bright blue hexagonal patterns. As if on cue, maybe it was, the band break into their radical recreation of "Little Drummer Boy". How the oldie, forever linked with Christmas, can sound so right when performed on a warmish day in June might have something to do with the fact that Luke Smallbone had a drum hanging military drummer boy style around his neck. But work it does, and it really is one of the highlights of a dazzling set.

7:53pm - We have to make an early exit. As we carry our gear to the car, Martin Smith is singing a Bethel Music classic and I can still hear every word he sings even as our car starts the drive back to Stoke. No doubt there'll be some who view Big Church Day Out as an unnecessary and expensive jamboree for experience-fixated evangelicals. But for those with eyes to see and ears to hear, this event is a rallying point for the whole Church Militant and a place where the pressures and problems of the world fade in the loving communion with God himself.