Running the gamut between alternative rock and contemporary powerpop, BIG METHUSELAH may not be a CCM big cheese but they make an enjoyable noise as Mike Rimmer reports. 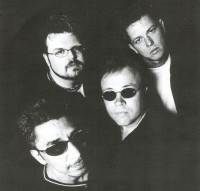 Any band which promises that their concerts will be "an evangelistic worship service that rocks" clearly have something going for them. Big Methuselah from Texas recently weighed in with an engaging CD, 'Human Sacrifice'. The band (Ted Pearce, singer/guitarist; Darrell Wren, bass; Chad Whiteley, drums; and Mario Torres, guitar) are already making some noise Stateside. Two of their songs ("Step Of Faith" and "My Child") reached number one on the WITR indie radio chart and they've just completed a music video for their song "My Self. Anoraks will also like to know the band are featured on the compilation album 'Time Capsule 2000' which is to be listed in the Guiness Book Of World Records as the largest compilation of all time with 200 artists! I quizzed the band's Ted Pearce.

Mike: How did the band get together? I know that some of you had other bands before this.
Ted: "I needed musicians who could play what the 'A list' studio musicians in Texas were recording on my solo project. Darrell, Mario and Chad were all on staff at Dan Dean's church, and had played as the band for Phillips Craig & Dean. The best songs on the CD are the ones recorded by this band, not the other four by the studio guys."

Mike: How do you feel about the relationship between Christian bands and the local Church?
"The other guys are all on staff in their local church. I was worship leader for five years at a Messianic synagogue and now travel around playing in various churches, encouraging Christians to love/support Israel and the Jewish people. My manager has been inquiring of Martin Smith's manager about producing my Messianic group, Y'huda, because of what he did with another Messianic group, Barry & Batya Segal. Hopefully, I will come to England again in the near future for that."

Mike: Where did the name Big Methuselah come from?
"I came up with the name Big Methuselah when a record label exec flew me into Nashville to begin writing songs for an album. At the end of the day we broke for dinner, and while we were discussing various things it became obvious that I had been writing for someone else's album. So the guy looked at me and laughingly said, 'You thought this was for you? You are too overweight and old to be a star!' Get it? BIG and METHUSELAH? If I was in this to please Gnashvile I'd really be in trouble..."

Mike: How would you describe the band's ministry?
"This is a difficult question. For a while I was calling everyone, working the streets, booking us into every stage that would have us. But last November I began to question the validity of a rock band 'ministry' because there was comparatively little fruit for the amount of work we were putting into it. I came to the conclusion that 'if God isn't in it then neither am I' and laid everything down. I told the band I would make no more phone calls and if the Lord did not SEND things to us, then we were through. We have never had as many exciting opportunities! We are no longer concerned with 'exposure' or 'gigs' but rather serving when/where we are CALLED to go. We are getting calls for 'public' appearances while still getting called to play in churches. When God is your booking agent it takes a lot of pressure off! So, currently we are playing about two or three times a month and when the phone stops ringing, we'll stop...and listen."

Mike: Tell me about 'Forgotten People' and why you feel so strongly about what is happening in the Sudan?
"Western-styled Christianity is based on a 'bless me' theology that is 180 degrees opposite of what Jesus taught us. To know Christ is to enter into the fellowship of his suffering. We have brothers and sisters who are being murdered. They need our help to get their wives, sons and daughters out of slavery. It only costs around $50.

"They are a part of our literal body yet we cut off our ear and act like nothing is wrong. Persecution could be coming to us someday. Would you consider doing articles to inform your readers? Would you run Public Service Announcements about the situation on your radio programme? Would you please be a watchman on the wall? Please? Someone has to because America doesn't seem to care. Would you ask England to prayerfully consider supporting Voice Of The Martyrs as they minister to the persecuted Church?

Mike: What reaction have you had to your songs?
"Our song 'My Child' was played at a prayer meeting (80 miles away) in Hillsboro, Texas, one Wednesday night for a small church. As the song was ending, a young girl burst out in tears and said she had been planning to commit suicide when she got home that night but God had spoken to her through that song and she realized how much he loved her and her life was saved......we can't top that. That song 'My Child' seems to reach people who long for a Father's love. There are lots of them in the USA. Many people have said that 'My Self' has opened their eyes to their own selfishness. And the CD doesn't even come out until May!"

Mike: Choose three songs from the album and say why they are significant for you.
'"My Child' is one that came through some intense personal tragedy. I believe this song may be what Jesus wanted this CD to accomplish. 'Psalm 2' - Man makes plans and God laughs! This song is his Word set to music. I could never offer anything better than his Word. 'Face To Face' is written about a woman that thought no one could love her. She was a 50-year old alchoholic, chain-smokin', cuss-like-a-sailor coot. To make a long story shorter, I led her to Christ and a year later she checked into a hospital with the flu and was dead two hours later. The song is about what she saw when she got to Heaven and it's written for her un-saved husband."

Mike: What future plans do Big Methuseleh have?
"With God in command every day is an exciting adventure. We plan to leave that open to him. We recently won a contest to find the Top 10 Indie Bands in America from Charthouse Media (one of the largest radio promotions companies in Nashvile). As a result, they are releasing a compilation (free!) to 800 radio stations and promoting it with four full-time staffers. This comes out in about two weeks. We'll see what God does with that..."